Katie Connolly, OD, shares about her presentation, “Therapeutics for Pediatrics: Just Say Yes,” which she presented during the 2022 AOA Optometry’s Meeting in Chicago.

During this year’s 2022 American Optometric Association (AOA) Optometry’s Meeting, Katie Connolly, OD, associate clinical professor at Indiana University School of Optometry, gave a case-based presentation that gave a comprehensive overlook different conditions that occur in pediatrics from the front of the eye all the way to the back of the eye, oral antibiotics, as well as oral and topical treatments.

This transcript has been lightly edited for clarity:

My second talk was on therapeutics for pediatrics. So, this talk is a case-based presentation where we walk through different types of disorders that occur in the pediatric population, and how to use pharmacological drugs to treat them.

So started out really with lid disease and thinking through over-the-counter treatments, including lid hygiene, as well as further mask and lid expression. But then really a deep dive into oral and topical antibiotics. And probably a big takeaway, really in working with the pediatric population is that a great oral antibiotic to consider is Augmentin, because you have really great coverage. It's broad spectrum, but it also covers HN flu, which is a bacteria that you need to be considering in pediatrics.

The next was to talk about herpetic keratitis, which is something that we don't typically think of having to deal with in pediatrics. And so, it poses, you know, always a stop and think about what to do whenever you do stumble across that in pediatrics. And so, we talked through the different dosages on when to use Acyclovir, the benefits of using oral medications over using topicals in kids — because in children, a lot of times it's difficult for parents to get drops in their eyes, so you want to consider always having a oral coverage that you know that the child is always getting treatment.

And then the third case that we discussed was a patient that came in and had gotten an airsoft gunshot right to his eyes. So, we had a lot of edema, as well as he had a hyphema. So just talking through the management of how to handle a hyphema in a young child in which you don't have as much control over what they're going to do and how rowdy they're going to be after having that insult. And so, in this case, the child really did quite well, as mom was a nurse. So, she took care of him at home, and he didn't need to be hospitalized. But unfortunately, he ended up having a re-bleed. So, he did end up having to have an anterior chamber wash out through the mix of that. What happened was it he had a large pressure spike, and that pressure spike was a combination of things from both the hyphema, as well as from being on a topical steroid. And that's because topical steroids have more of an IOP response in kids than they do in adults.

The lecture also talked about glaucoma medications, IOP lowering medications that are safe for use in kids, and really one of the big takeaways is that you really want to watch and not use Alpha-2 agonists in children because of the CNS side effects that they can have. So, you really should steer away from those up until about 12 years of age.

So overall, that course was really giving a comprehensive overlook at all sorts of conditions that occur in kids from the front of the eye all the way to the back of the eye, oral antibiotics, and oral and topical treatments as well. 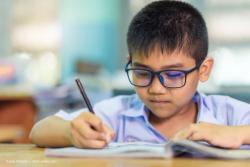 Dr. Rafieetary: What I wish I knew before entering optometry