Like books and e-readers, old and new can live together in harmony

The evolution of e-reading had some once proclaiming books are dead. One OD tells how old and new technologies can flourish side-by-side like books and e-reading and how one book and author has influenced his life.

“When I have a little money, I buy books; and if I have any left, I buy food and clothes.”   -Erasmus

I’m an old, boring white dude with relatively few vices. However, like Erasmus, I’d rather go hungry and naked than live in a house with no books.

My wife and I enable each other’s bibliophilia. We have multiple bookshelves in our house, and when they’re full, we stack our books on desks, bed stands, tables, on top of the mantle and hearth, and when all else fails, in corners.

We both read electronically as well, but we can’t shake our hardcover habit. The minute we donate a batch of books, we veer off into the nearest used or independent bookstore for our next literary fix.

There’s just something irreplaceably satisfying about holding a book in one’s hand; the heft, the smell, the font, even the texture and thickness of the paper, all combine for a sensory experience that e-reading simply can’t match.

The pundits and prophets were wrong a few years back when they declared “The book is dead!”

As it turns out, both e-books and traditional books have flourished side by side, with flesh and blood booksellers in brick-and-mortar bookstores discovering and filling new niches and remaining as strong as ever. 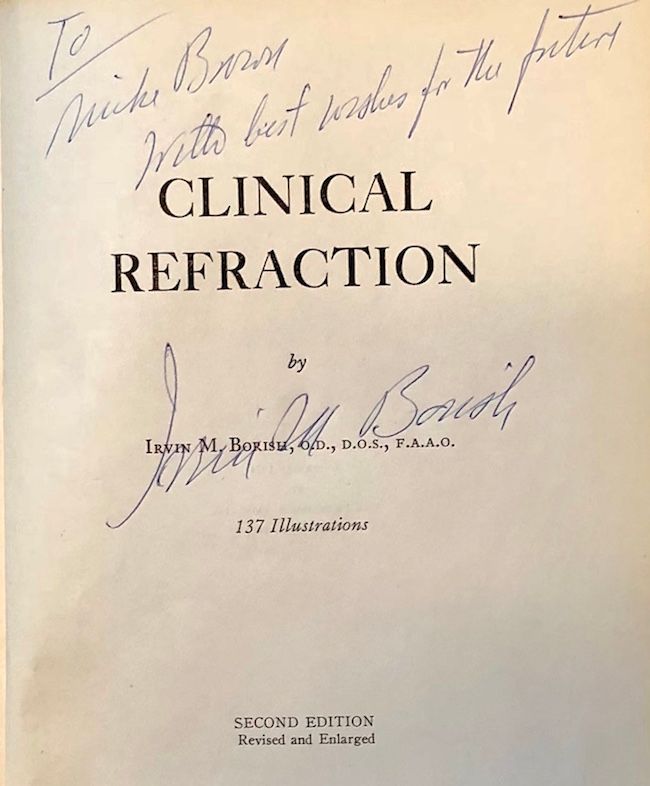 Not surprisingly, there are still some traditional eyecare textbooks in my office as well.

Like most of you, I’ll usually Google a topic on the run, but when I want to take a “deep dive” into an ocular condition, I find myself grabbing a book from my shelf.

I keep classics around like The Wills Eye Manual, Chang’s Clinical Decisions in Glaucoma, Alexander’s Primary Care of the Posterior Segment, Kaufman’s Cornea, and Kanski’s Clinical Ophthalmology. They’re familiar companions and chairside consultants that never let me down.

There is also another special volume that I keep close at hand-one book that rules them all.

In 1992, during my first year of practice after my residency, I was in St. Louis visiting family and had a chance to stop by the American Optometric Association (AOA) headquarters.

There I found a treasure trove of early to mid-20th century optometry and ophthalmology textbooks, some for sale. Eye geek that I am, I bought several.

My favorite was a 1954 2nd edition printing of Dr. Irving Borish’s Clinical Refraction.

ODs of a certain age know who I’m talking about. For those millennial ODs who may not, picture Albert Einstein with a retinoscope in his hand.

It just so happened that my residency preceptor Dr. John Potter had been a student of Dr. Borish’s at Indiana University School of Optometry.

I prevailed upon John to write a letter to Dr. Borish requesting that he autograph my book. John mailed the letter and book, and I hoped for the best. 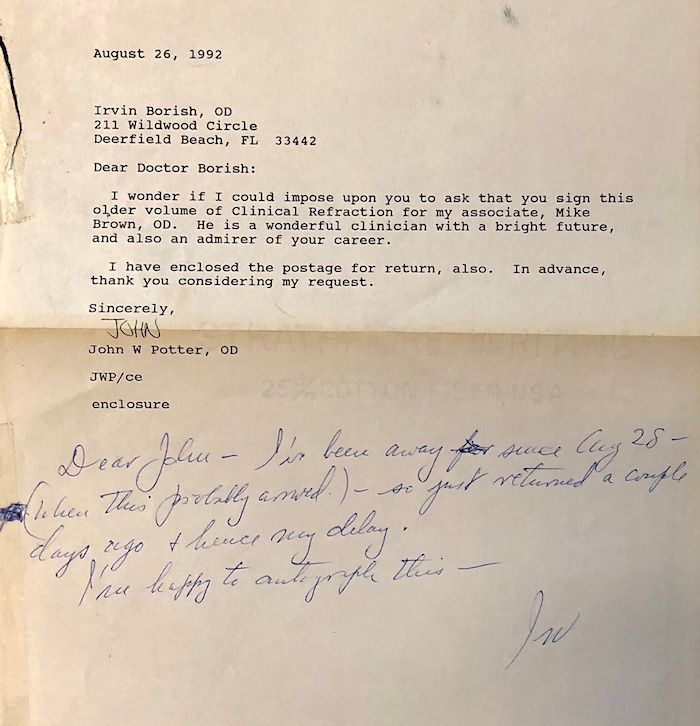 A few weeks later, I received a package with the autographed book which now bore a gracious inscription: “To Mike Brown, With best wishes for the future.”

I was floored that a revered, all-time great clinician, teacher, and visionary of our profession had taken the time out to wish a new, nobody OD like me well.

Dr. Borish’s example of generosity made an impression that has remained with me over the course of my career.

Sometimes, I take that book off the shelf, hold it in my hands, and consider the power of a few well-chosen words. I resolve to select my own more carefully.

It’s almost sacramental, like receiving a blessing from one of optometry’s founding fathers.

Try getting that kind of vibe from a Kindle or smartphone.

New and old stronger together

Books aren’t going away any more than our innate longing for human connection and relationship.

That’s why telemedicine, online apps, and artificial intelligence (AI) don’t really bother me that much.

Sure, it’s going to be a wild ride-all sea change is.

It may turn out, though, that digital medicine and the traditional, face-to-face kind will flourish side by side, with flesh-and-blood doctors in brick-and-mortar practices discovering and filling new niches and remaining as strong as ever.