A new cosmetic sihy contact lens has been recently released by Alcon (Air Optix Colors), which is manufactured with lotrafilcon B and has an oxygen permeability (Dk) of 110.

Cosmetic lenses in Europe and the U.S. typically account for <10 percent of all new fits today, but they are more commonly used in Asian countries such as China (15 percent), Indonesia (31 percent), South Korea (41 percent), or Taiwan (63 percent).1,2

Despite this growing market, lenses with cosmetic tints are primarily available in pHEMA (poly(2-hydroxyethyl methacrylate))-based materials, which have a relatively low oxygen permeability compared with modern silicone hydrogel (sihy) materials.2

A new cosmetic sihy contact lens has been recently released by Alcon (Air Optix Colors), which is manufactured with lotrafilcon B and has an oxygen permeability (Dk) of 110. The application of the color print is distinctive.

While the color print on hydrogel lenses is often applied to the anterior surface of the lens, Air Optix Colors incorporates a printing technique in which ink layers are encapsulated within the material, near the back surface of the lens, which are then covered with an additional clear coat before plasma treatment.

Patient satisfaction and clinical performance with the new cosmetic sihy lens was assessed in a clinical study comparing it to a long-standing, successful conventional color hydrogel lens, FreshLook ColorBlends, also manufactured by Alcon.

Ethics approval was obtained through a Research Ethics Committee at the University of Waterloo prior to the start of the study, and the study was conducted following the tenets of the Declaration of Helsinki. RMANOVA and Tukey Post-hoc comparisons were used for the analysis (p<0.05 was considered significant).

In this study, habitual soft lens wearers initially wore the company’s lotrafilcon B sihy non-color lens (Air Optix Aqua; Alcon) bilaterally for one week to adapt to the lens material and design. This adaptation phase was followed by four weeks of daily lens wear of Air Optix Colors and FreshLook, in which each lens was worn in one eye only, in a randomized contralateral eye design.

Both lens types had the same color pattern (color Grey) and the Air Optix Colors contact lens was replaced after four weeks and the FreshLook contact lens after was replaced two weeks (Figure 1). During each study visit, visual acuity, subjective ratings, and biomicroscopy data were collected. After 1, 13, and 27 days of lens wear, study participants completed a variety of subjective ratings at home. 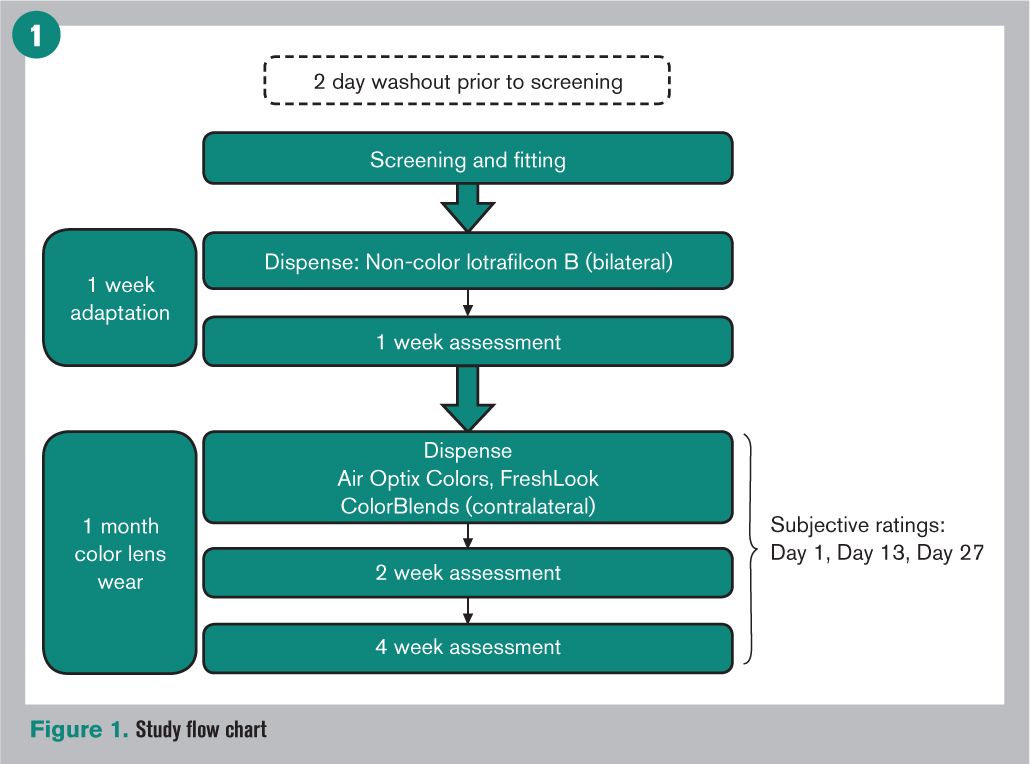 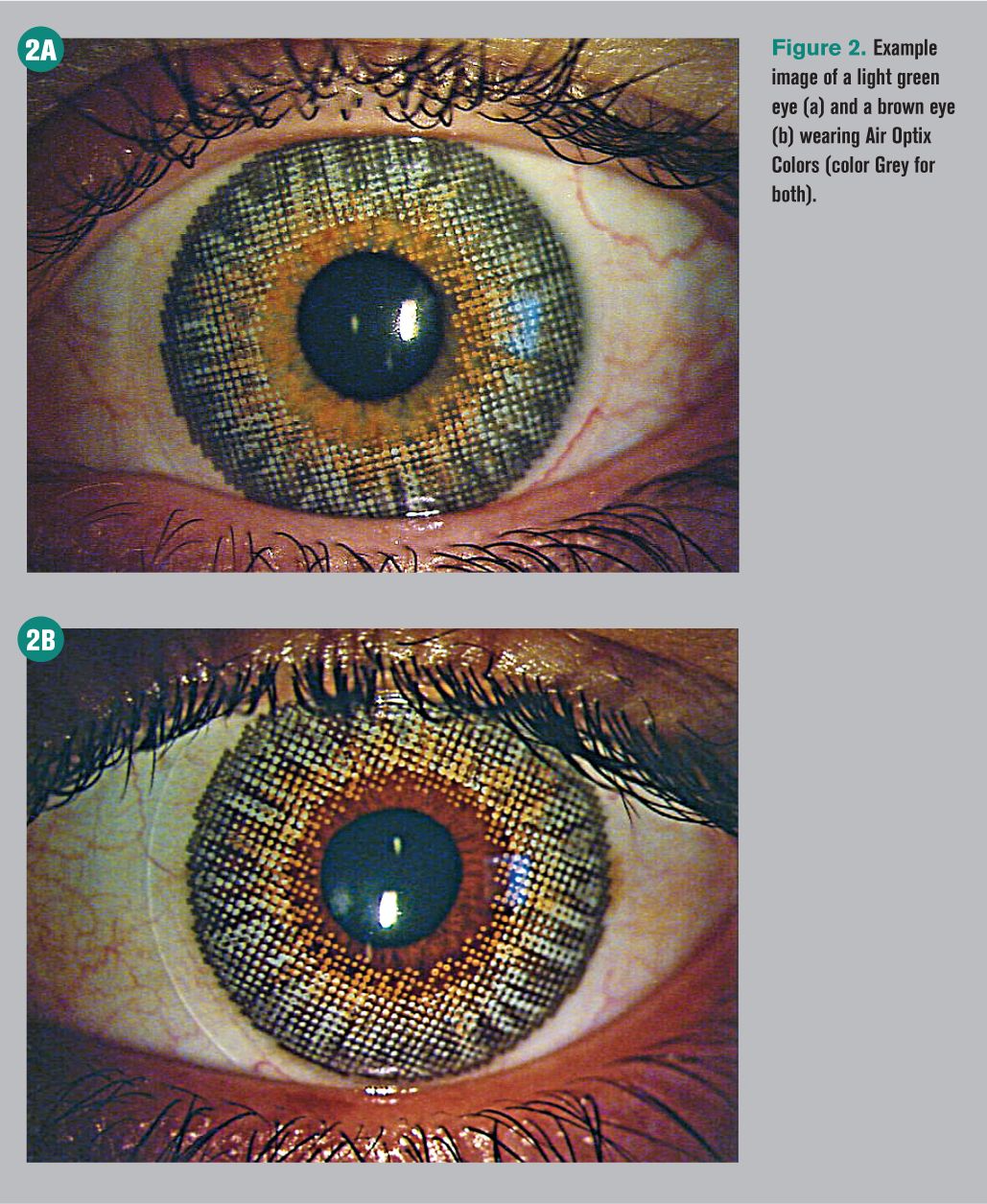 Forty-seven participants were screened, of which nine discontinued due to a variety of non-study lens concerns, including discomfort with the FreshLook lens during the screening visit, inconvenience, loss to follow-up, lens mix-up of OD/OS at the two-week visit, or conjunctivitis. 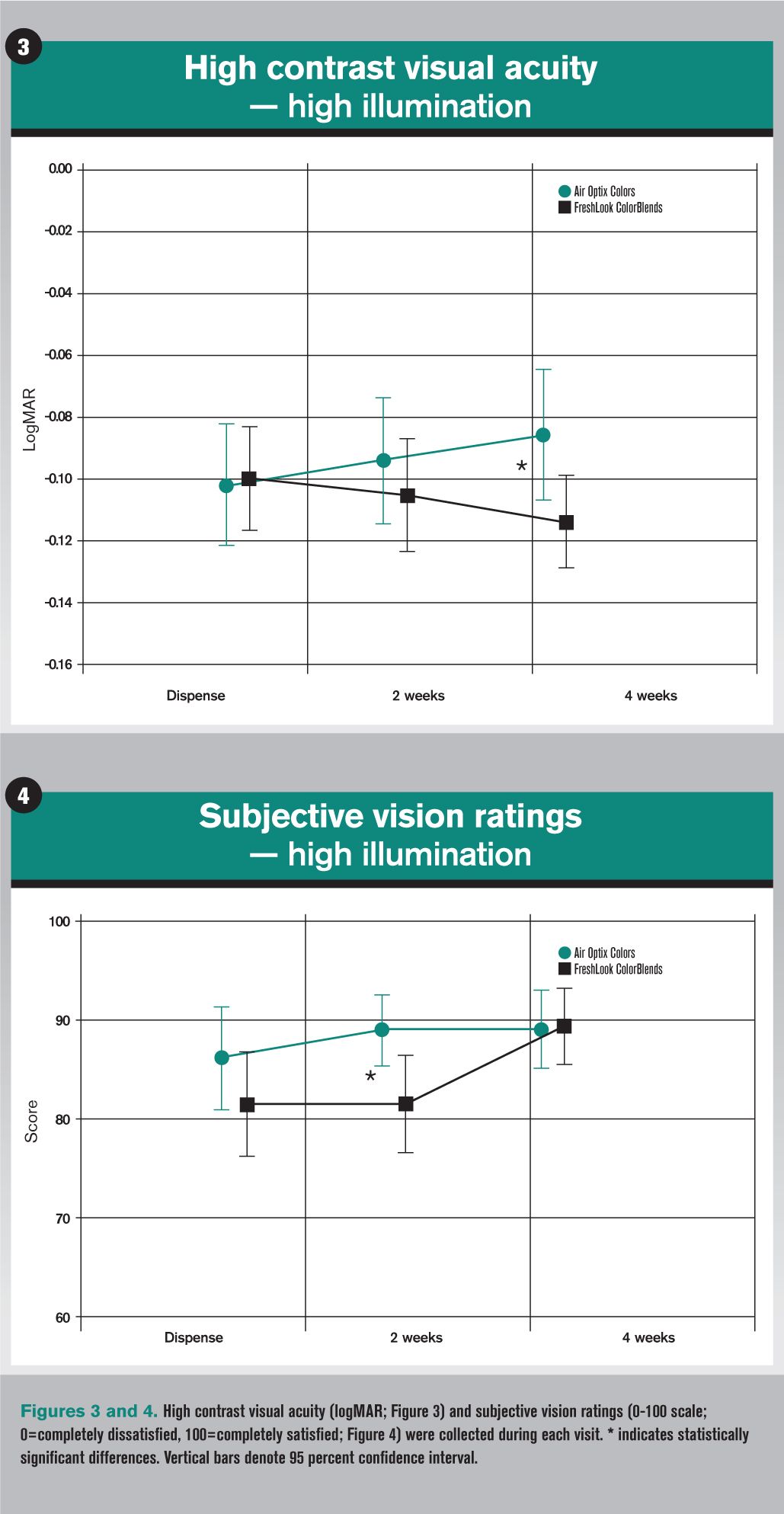 High-contrast visual acuity (VA) at high illumination and low-contrast VA at high and low illumination was measured at the dispensing visit and after two and four weeks of cosmetic lens wear.

After the assessment, participants were asked to rate their satisfaction with vision using a 0-100 scale (100=completely satisfied). Both lenses provided acceptable VA, and the subjective vision ratings reflected that (Figures 3 and 4).

For high-contrast VA, a difference between lenses was found after four weeks of wear, indicating that FreshLook performed marginally better compared to Air Optix Colors (p=0.004), but this two-letter difference was not considered clinically relevant (Figure 3). Low-contrast VA ranged between +0.17 and +0.19 logMAR with high illumination and between +0.21 and +0.24 logMAR with low illumination for both lenses with no differences found between lenses or over time (all p>0.05).

Overall satisfaction with vision at high and low illumination was rated higher with Air Optix Colors compared to FreshLook (p≤0.016); however, post-hoc comparisons indicated significant differences only at the two-week visit (p≤0.02) (Figure 4). 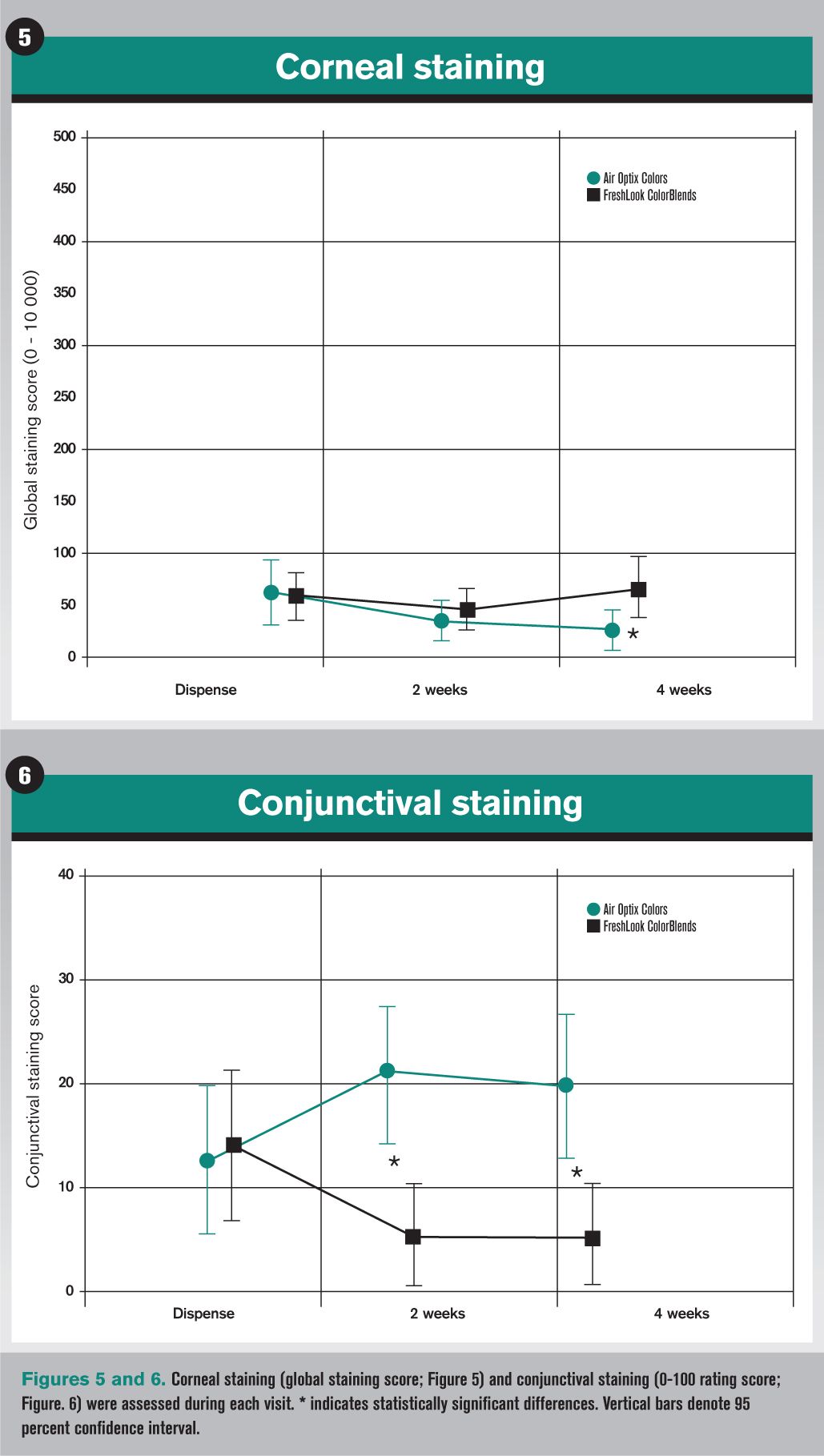 Biomicroscopy findings were clinically acceptable-no serious adverse events, either related or unrelated to the study products occurred-and only one significant event was noted (conjunctivitis). Corneal staining as determined using the global staining score3 was overall slightly higher with  FreshLook compared to Air Optix Colors (p=0.037), while the opposite was found for conjunctival staining (0-100 scale), which was marginally higher after wearing Air Optix Colors compared to FreshLook (p<0.001) (Figures 5 and 6).

The eye wearing FreshLook showed slightly more bulbar hyperaemia compared to Air Optix Colors (p=0.002), but this difference was negligible and not of clinical significance. Palpebral conjunctival hyperemia and roughness were clinically normal between 22 and 31 units (0-100 scale), and no changes were seen throughout the study or between lenses (p>0.05).

Related: The assumptions, expectations, and reality of lens care awareness 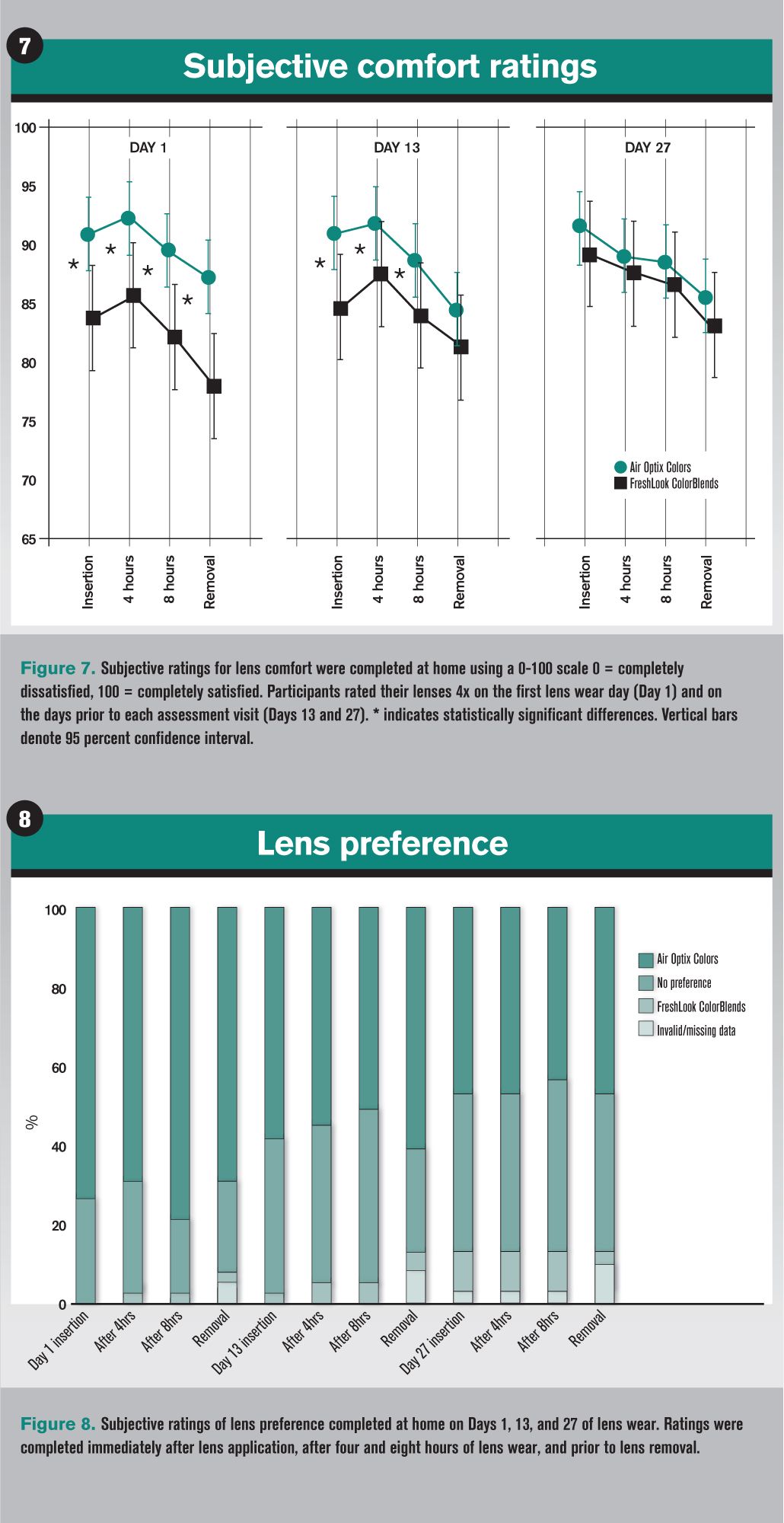 Participants completed at-home ratings for comfort and dryness on Days 1, 13, and 27 using a 0-100 scale (100=excellent comfort/not dry at all). Ratings were completed following lens application, after four and eight hours of lens wear, and prior to lens removal (Figure 7).

As seen in previous studies, lower comfort scores were found at the end of the day (prior to lens removal) compared to all other time points (p<0.008).4,5 The comfort for Air Optix Colors did not change over the four-week study period; however, comfort ratings increased significantly for FreshLook, with no difference between lens types on Day 27 (p>0.05).

Ocular dryness ratings followed a similar trend compared to the comfort results, indicating that both lenses felt drier toward the end of the day. It was not surprising to find similar results for comfort and dryness ratings because this has been shown previously.6 On Day 1 and Day 13, participants rated Air Optix Colors less dry than FreshLook (p<0.01), but they noted no difference on Day 27 (p>0.05).

Next: Peripheral vision and halo

During the four-week period, participants were also asked to indicate whether their peripheral vision was affected by the color in the lens. The majority of participants enrolled in this study had no previous experience with cosmetic lens wear, and an impact in peripheral vision with at least one lens was reported by 12 (32 percent) participants after lens application on the first day.

On Day 27 prior to lens removal, only four (13 percent) participants noted the color print in the periphery with FreshLook, but no participant indicated this with Air Optix Colors. It can be expected that lens wearers who habitually wear clear lenses may go through an adaptation period and are likely to become less aware of the color print over time.

Halo scores were rated by the participants on a 0-4 scale (0=no halo). In an attempt to test this in the clinic, a small LED light of moderate intensity was placed in the center of a large, square, black chart. Participants viewed this light at three meters under dim illumination and rated how far the halo around the light spread using four reference points of equal distance away from the light source.

Both lens types showed an improved halo score over time between the dispensing visit and the four-week visit (p<0.05).

Participants were asked whether they had a lens preference over the course of the study (Figure 8). After lens application on the first lens wear day, 74 percent (28) of participants preferred Air Optix Colors, and the remainder of the participants had no preference; no one preferred FreshLook.

At the end of the four-week study period, only one participant preferred FreshLook, while all other participants had either no preference (41 percent; 13) or preferred Air Optix Colors (47 percent; 15).

This shift in preference suggests that participants took longer to adapt to FreshLook, while no such adaptation period was needed for Air Optix Colors. 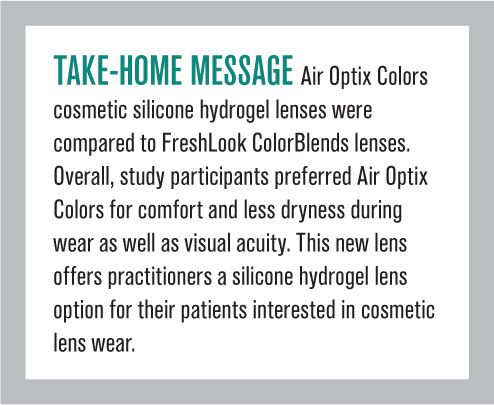 Because color lens wear was new to most study participants, they were more aware of the color in their lenses and experienced minor halo appearances at the beginning of the study; however, the adaptation time for Air Optix Colors was typically shorter compared to FreshLook.

Research funded by Alcon; editorial and financial support for this article provided by Alcon.

The authors thank Drs. Ping Situ, Amir Moezzi and Krithika Nandakumar for helping with the data collection in this study.