As the scope of optometry practice expands, office-based surgical procedures are becoming more and more common in the handful of US states that allow optometrists to perform them.

Whether utilizing lasers, injections, or other surgical tools, these procedures are less complex and invasive than more intensive procedures and allow optometrists to provide a broader scope of treatment for patients hoping to minimize their time traveling from practitioner to practitioner.

Nathan Lighthizer, OD, associate professor and associate dean at Northeastern State University College of Optometry in Tahlequah, Oklahoma—who has been performing surgical procedures in the office for several years—described the growing suite of treatments offered in optometrists’ offices today.

The most common laser-based procedure performed in an optometrist’s office is the yttrium aluminum garnet (YAG) capsulotomy, Lighthizer said

Roughly 40% to 50% of patients who have cataract surgery will eventually develop posterior capsule opacity, in which a cloudy membrane covers the eye.1 This typically occurs several months after cataract surgery.

During YAG capsulotomy, the eye is dilated and the YAG laser bores a small opening into this membrane, enabling unobstructed vision nearly instantaneously; the entire procedure takes just a few minutes.

Recovery time from YAG capsulotomy is minimal, as is the rate of complications. Other than needing someone to drive them home, patients have no restrictions on activity afterwards. There may be a small increase in floaters in the days following the surgery, but serious side effects are rare.

Floaters, of course, afflict a substantial number of people, especially as they age. According to Lighthizer, the percentage of people who experience floaters corresponds to their ages–60% of 60-year-olds have them and 75% of 75-year-olds, for instance.

But for those people who find them truly bothersome, laser floater removal, or laser vitreolysis, which has become popular over the past 5 to 7 years, is a solid in-office option. The procedure uses a YAG laser to target and zap the bothersome floaters, quickly vaporizing them.2

Despite its relative newness, the procedure is sought after; Lighthizer estimates that he has done 150 laser floater removal procedures in the past month alone.

Complications are rare and it’s much less invasive than vitrectomy, a technique that employs a probe to suck floater-filled fluid out of the eye and replace it with a balanced salt solution, and which requires a visit to a retinal surgeon. Lighthizer said he has referred only 4 patients for vitrectomy in the course of his 13-year career.

Move over, glaucoma drops. An exciting development in the treatment of glaucoma is the recognition that selective laser trabeculoplasty (SLT) is now considered a first-line treatment. The 2- to 4-minute procedure involves using laser therapy to spur increased fluid drainage from the eye, which lowers eye pressure.3

Traditionally, a glaucoma patient would be given eye drops to manage the procedure, Lighthizer said, with the dosage increasing over time. Only when the patient could no longer tolerate the side effects of the drops would SLT be considered.

But the results of the LiGHT study, published in The Lancet in 2019, reveal that SLT is at least as good an option as eye drops.

One advantage of choosing SLT over eye drops is that patients—most of whom are elderly—no longer have to struggle with the daily burden of remembering to use the drops and dispensing them accurately, particularly if they have arthritis or other mobility issues. While the procedure does not cure glaucoma, it will keep pressure under control for anywhere from 2 to 5 years, after which it can be safely repeated.

Building on the success of SLT, an even speedier therapy for glaucoma may be on the horizon: a new automated laser currently being tested in trials has so far shown encouraging results.

Used as part of a procedure called automated direct selective laser trabeculoplasty (DSLT), this kind of laser reduces pressure in the eye within about 2 seconds, compared with SLT’s 2 to 4 minutes. If approved for widespread use, it hopefully will provide another glaucoma treatment option for optometrists and their patients.

Dealing with lumps and bumps

For patients who have eyelid lesions, whether seborrheic keratosis, squamous papilloma, chalazion, or nevi, technology has evolved to allow optometrists to perform excisions with precision and control.

After a local anesthetic is injected into the eyelid, optometrists can use a variety of surgical instruments to get rid of any lumps and bumps on the eyelid. Lighthizer is partial to a radiofrequency unit that utilizes a small radio-wave-emitting probe to remove lesions layer by layer, with minimal to no bleeding or scarring afterwards.

Not all patients are candidates for these procedures. Despite the plethora of new in-office surgical options, Lighthizer is careful to use discretion when making recommendations. For example, some patients with eyelid lumps and bumps simply are unbothered by the look or feel of them.

In these situations, Lighthizer will evaluate the lesions to determine whether they’re benign or cancerous. If a lesion is ulcerated, asymmetrical, or multicolored, or if it’s relatively new or suddenly growing, those are signals that it may be cancerous. In these cases, Lightlizer will send the patient to an ophthalmologist or dermatologist for further evaluation.

While Lighthizer is confident that more states will pass laws allowing optometrists to perform surgical procedures, in most states patients still must visit an ophthalmologist for these services.

Because the laws have continually changed over the years, Lighthizer recommends checking with each state’s board on a regular basis to keep abreast of new developments.

This article is based on Lighthizer’s presentation at the 2022 Vision Expo East, held March 31 - April 3, 2022, in New York City, New York. He can be reached at lighthiz@nsuok.edu.

1. Boyd K. What is a posterior capsulotomy? American Academy of Ophthalmology. May 24, 2022. Accessed July 22, 2022. https://www.aao.org/eye-health/treatments/what-is-posterior-capsulotomy 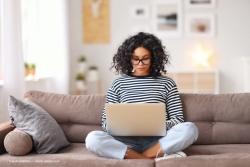