Q&A: A variety of pets, master’s in nutrition, peanut butter, and jujitsu 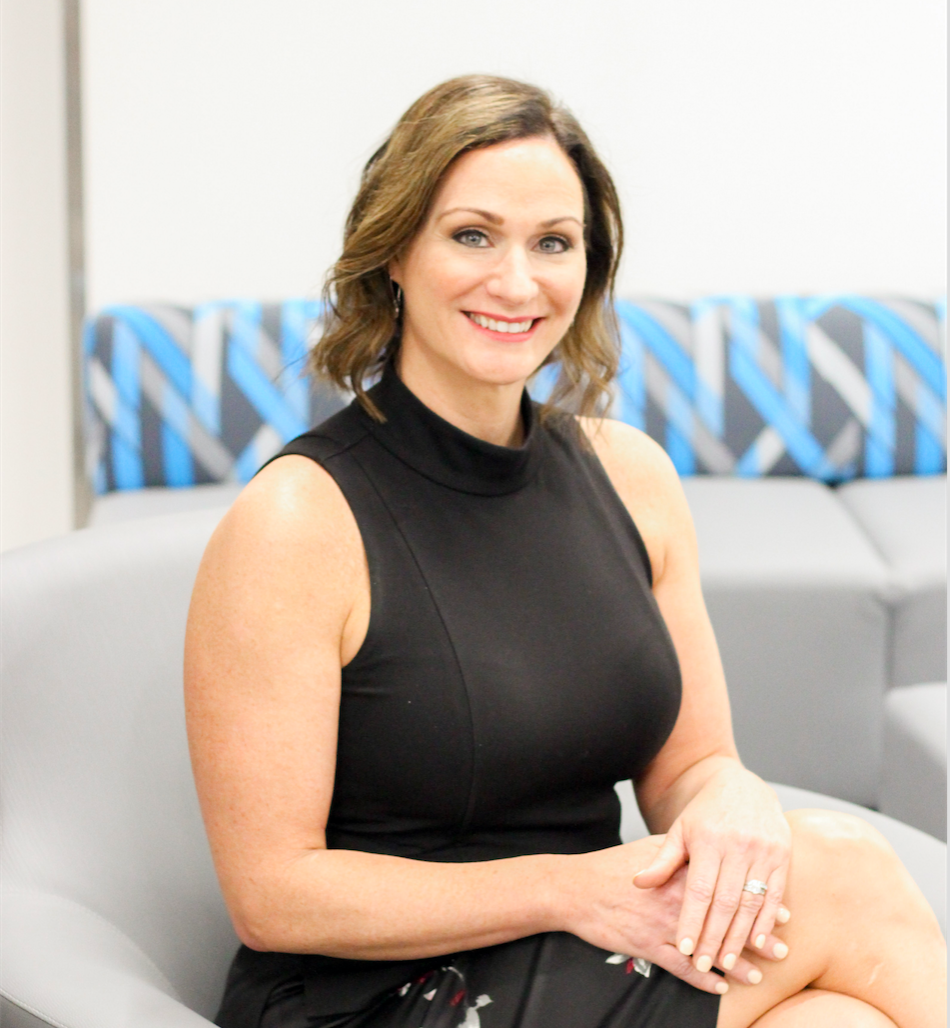 Where did you grow up?
I grew up in Erie, PA. I lived there until I was about 15 years old, then we moved to Sarasota, FL. My father was stockbroker, and my mom was a stay-at-home mom. It was not my favorite year to move, right in the middle of high school. I think I was mad at my parents for a year. My father got a job offer as broker to move to a different firm, so we all moved down here.

How did you become an ophthalmic technician and why become an optometrist?
I graduated from the University of South Florida with a degree in biology. I happened to get a job working for an ophthalmologist, knowing nothing about the eye, then moved to work for a pediatric ophthalmologist who was my mentor. That practice was an externship site for fourth-year optometry students, so I had to train them.
After training students time after time and talking to them about optometry, I realized I should go back to school.  I knew that I liked the field but that I really wasn’t working to my potential as a COT. It wasn’t an easy path because it took me a couple of years. I was about 30 when I started optometry school.

Previously by Vernon Trollinger: Q&A: Sharing space with another OD, ODs on the front line of primary care, and Motorcycle Weekend

Why ocular disease?
As a technician I was always interested in asking how did this happen and why is this happening and trying to understand it. When I was a student, I gravitated to that topic. When I was a second-year student, I started to tutor in ocular disease. When I became a resident, the dean still had me come back to tutor. [Laughs]
Because I worked for a pediatric ophthalmologist before I went to school, I thought I was going to do pediatrics. It’s a little secret that I actually do know how to do pediatrics, I don’t tell people that.

What sort of menagerie do you have?
We have quite an interesting ecosystem going on. Everybody is trying to kill or eat the other one. [Laughs] I have a miniature pinscher dog, two cats, a bearded dragon, a leopard gecko, two bald pythons, and two parakeets. We take things out to play only one at a time. My husband and I both really enjoy animals. It’s a common interest, so we work together to keep the tribe in check. I had cats when I met my husband, but he was a reptile lover and got me hooked. The bearded dragon has a following. He has his own Instagram page. My office is kind of like a reptile museum.

What's it like being on faculty at the same school with your spouse, Joe Sowka?
Joe and I are three offices down from each other. Ironically, I don’t see him that much. He works at the main school and runs the glaucoma service, and I work at the downtown clinic where we see indigent patients with generalized disease. If we’re both in our offices at the same time, he screams down the hall at me. [Laughs] So, it’s very professional. We don’t have any concerns working together. It’s pretty easy. And it’s fun when we lecture together. A lot of people don’t even know we’re married. That’s kind of fun.

How do you choose your travel destinations?
Most of the time they involve lecturing. They’re usually just interested in Joe, I tag along, and then they say, “If she’s also an eye doctor, maybe she can lecture, too.” We’ve been to Australia five times, New Zealand twice, lot of interesting and fun places to lecture. We tack on extra time.
But we do occasionally just randomly pick a place. We like to travel while we’re young enough to do it and healthy enough to do excursions and have fun and do things. We decided when we get older we’ll just sit around and look at each other, but right now we’ll have fun and travel and do as much as we can.

What's your favorite city?
I liked Prague for the historical perspective. It’s beautiful with a lot of history. When we first got to Prague, it was late at night and we saw a lot of graffiti-we associate that in the States with not-a-great neighborhood. We were a little nervous walking down dark alleys trying to figure out where we were, then all of a sudden we walked out into the middle of the square and it was gorgeous.
That was the most beautiful, but I would say our happy place is the Daintree Rainforest in Australia which we’ve been to several times. When we lecture, we go up north to the rainforest area on the Barrier Reef. We stay in huts that are up in the rainforest. No lights, no WiFi, no nothing, and it’s amazing.

Why pursue a master's in nutrition?

Not that many people know that I worked as a personal trainer. Nutrition goes hand in hand with fitness. I am finding that when I see patients, a lot of their problems have to do with poor life choices, not adequate nutrition, and certain risk factors. Having been a former coach, I started to merge my old life with my new life.
Nova had a really great program, and it was convenient. I’m going to continue doing research in that area because it’s interesting to me and eventually pursuing licensure as a dietitian. I can have practice inside of a practice where I can legitimately counsel patients with disease-specifically diabetes and hypertension, conditions where patients need to lose weight-and legitimately follow them in an above-the-board way.

What's your guilty pleasure food?
My personal trainer is well aware of the fact that it’s peanut butter. [Laughs] When there’s stress involved, it’s a jar of peanut butter and spoon, and that’s bad. Chocolate and peanut butter are two of the things that I’ll binge on. That’s my midnight food when no one’s looking.

What's something about optometry you'd like to change?
What we’re seeing from our side in academia is difficulty getting people motivated into the profession based on how much money they’re going to make vs. the debt it takes to get through the program. It’s reaching a critical debt-to-income breaking point. There’s only so much debt a person can go into to make it worthwhile when you make X when you come out the other side. I don’t know what the solution is to that.
It’s the same with residencies. Students think, “I have to start making money so I can pay back these loans. I don’t have the luxury of an additional year to make $36,000.”  I’d like to see salaries for residency programs increase significantly so that it is a more desirable possibility.

Do you have any regrets?
No, I don’t have any regrets, even bad decisions I don’t regret. [Laughs] Now bad decisions, I have made many. Even though you may regret thins in your past, had you not done them you would not be where you are. Sometimes life has its own path. Coming into optometry school was a big change in my life because I was almost already 30 years old and then getting the masters, where that is going to take me, I don’t know.
I’m 50 years old, and I’m still trying to figure out what I’m going to be when I grow up. I like it; I don’t like to think that I'm ever done with anything. I’m the kind of person who is looking for the next thing to do. That makes me feel alive and invigorated. Sometimes those things work and sometimes they fail, but they always have a purpose. So, I don’t have any regrets. [Laughs]

What's the craziest thing you’ve ever done?
At a later age, I decide to take up martial arts. I was the only female in the class sparring with men who were half my age. [Laughs] I have a first-degree brown belt in jujitsu. I did taekwondo first where I did a lot of board breaking, but I switched to jujitsu which is a lot of grappling and judo throws. Being the only female in the class was odd, but I’ve never been bothered by it.
When I was in grade school I was the only girl on an all-boys basketball team, so I’ve always been comfortable among male colleagues in sports. I’m one of those girls who is comfortable walking into the free weight room in the gym, right in the middle of a sea of men, and have no concerns. [Laughs] 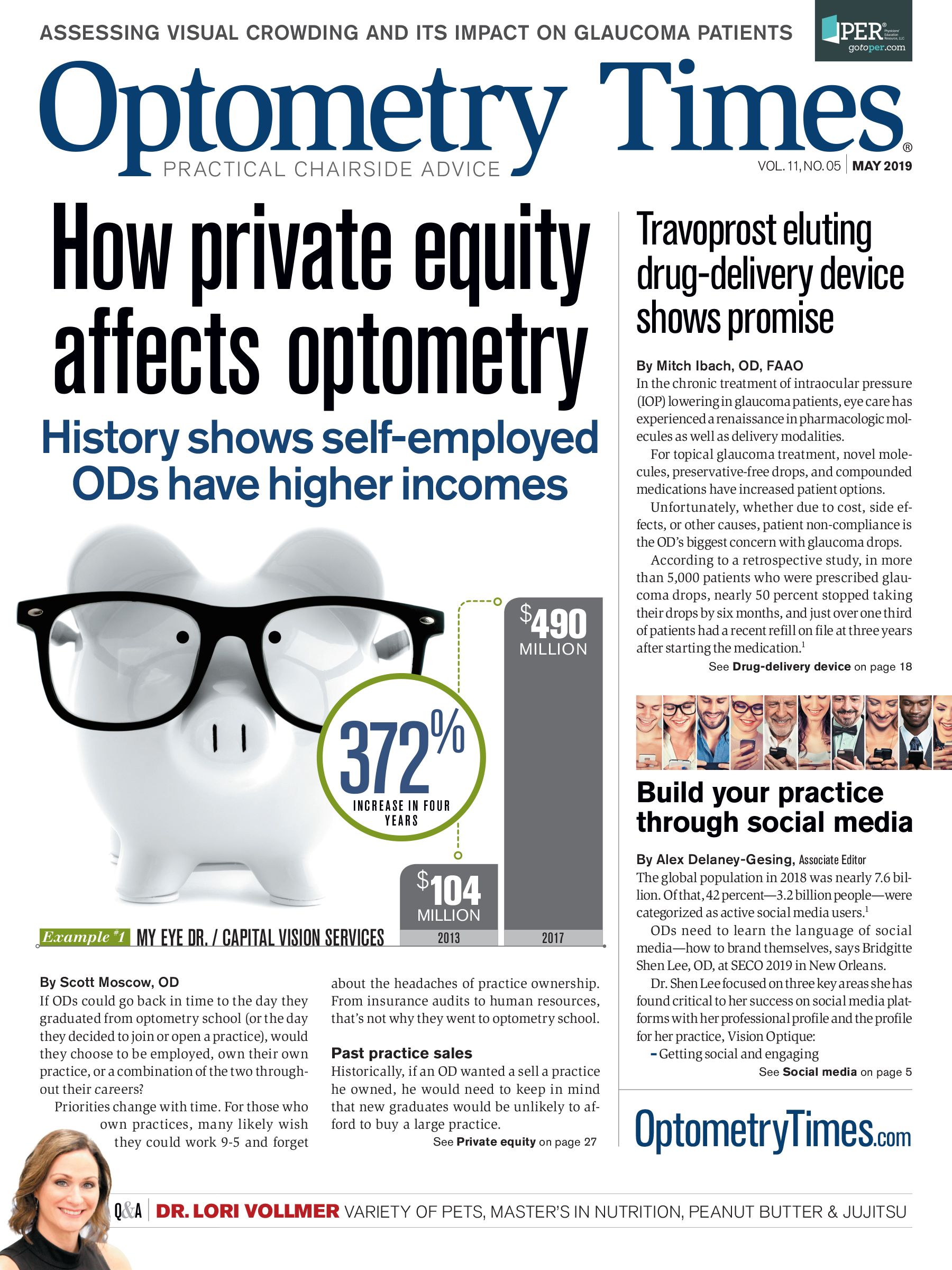 Travoprost eluting drug-delivery device shows promise
How private equity affects optometry
Know what practice metrics to measure
How to control myopia progression in your practice
How to determine an ideal LASIK candidate
How to build your practice through social media
Consider the whole patient when treating glaucoma
Role of insulin therapy in diabetes and diabetic retinopathy
Assessing visual crowding and its impact on glaucoma patients
I introduce myself to patients as Ben
Revamp your patient handoff
Q&A: A variety of pets, master’s in nutrition, peanut butter, and jujitsu
How I built a customer service-centered practice
Related Videos
Related Content