They strive to learn about eyes and how to take care of the patients they belong to. They strive to carve out career paths, build their practices, and polish their reputations. They strive for financial success, independence, and-usually-enough savings and investments to retire on and enjoy the balance of their days.

They build rÃ©sumÃ©s that are the records of their strivings-the “professional virtues” they scurry about collecting like early morning beachcombers scavenging for shells, sharks’ teeth, and jetsam.
Even though I am well-established in my career, entering the “bell lap” even, I keep my professional curriculum vitae (CV) up-to-date.

Because you just never know.

Previously by Dr. Brown: Blog: How I learned to stop worrying and love tech refractions Lasting memory
Recently, though, while attending the funeral of an optometry school classmate, I was reminded that in the end, “professional virtues” pale in comparison to “personal virtues.” The latter are the lifelong record of what kind of person an individual is as demonstrated by his words and actions. In short, the things people say about a person in his eulogy.

John Keriotis, OD, a member of our Class of 1990 at the University of Alabama at Birmingham School of Optometry, was the first of us to die, but he will not be the last.

Although mention was made of John’s professional career in his online obituary, I noticed that on the day of his funeral, not a single person I heard talk about him-including his priest-mentioned he had been an optometrist.

At first, it struck me as odd. But as I listened more, I realized what was happening.

Because John made the wise decision to put love above all else, I was hearing the oral recitation of a rÃ©sumÃ© so greatly weighted with “personal virtues” that it had flipped upside down and become an inverted pyramid.

Also by Dr. Brown: Blog: Too many cooks in the kitchen spoil the broth

Personal life
Husband, partner, best friend, and love of her life to Annie. Eight years of experience dating, 25 years married. He was willing to become an itinerant OD in the early years of his career so that he could be with Annie, a former Navy physician and now psychiatrist, as she trained and launched her career.

Together, they moved to back to Birmingham, Alabama-where they first met-to make a life together, help each other along their respective career paths, and create and raise two living, breathing tokens of their love: Nicholas and Isabelle. They supported each other through good times and bad, thick and thin. There was nothing they would not do for each other.

John was the all-in, always-there father, president, and CEO of the “Nicholas and Isabelle Fan Club”-19 years experience. He led them on a path of discovery and adventure that provided a solid foundation for life and learning by encouraging, instructing, and guiding them.

Also by Dr. Brown: 5 reasons I went back to school as an OD

He wore funny hats, made funny faces, and regaled his children with Dad jokes-the kind that made them cringe and love him at the same time. John traveled with Nicholas to Ireland on a band trip, and insisted on teaching Isabelle to drive even while undergoing chemotherapy. He provided a shining example of life-long service and fun they will never forget.

Brother, son, true friend, and a humorist-56 years experience. As an adopted son of the South and resident of two “steel cities,” he never forgot his Pittsburgh roots and family (Go Steelers! Go Pirates! Go Penguins!).

Creator of his own brand of dry, ironic, and appropriately sardonic humor, which made those around him double over in laughter. He was easy to be around and always quick with a quip, meme, prank, or surprise photobombing designed to put everyone in their place and all things in their proper perspective.

He responded to Annie’s growing list of woodworking requests with a reliable, long-suffering “Yes, dear.” He made custom-built cabinets and frame cases for his private practice. Gets credit for 56 years as a “master craftsman” because he spent all that time building a wonderful life.

John was a comprehensive optometrist, specializing in mastery and reduction of myopia for 29-plus years experience. Adored and respected by his patients.

Related: How to control myopia progression in your practice Optometry community
When his passing was announced on ODs on Facebook, many mourned, but they also celebrated the life as a man who had represented optometry well and cemented a legacy as a cherished colleague and friend.

Those ODs who are older have less trouble hearing the clanging signal of the “bell lap” as they pick up the pace and rush headlong toward a late afternoon appointment they are destined to keep.
Younger colleagues just starting out-and even those in the middle of their careers-may not be as attuned to hearing that clarion call, especially considering all the background noise in these busy, uncertain days.

I invite them, and all, to consider the life of John Keriotis and emulate it. To spend more time linking up with in-person family and friends than on LinkedIn. To build rÃ©sumÃ©s so top-heavy with “personal virtues” that they flip upside down and outlast you.

Because, you just never know. 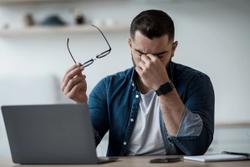