Consider the impact of diabetes on management of patients with glaucoma

The estimated global prevalence of diabetes mellitus was 463 million in 2019, representing 9.3% of the world’s population with the numbers predicted to increase to 578 million by 2030.1 Diabetes is a major cause of blindness, largely because of its effect on the retina. However, diabetes also affects virtually every other structure in the eye and is a risk factor for numerous ocular pathologies. Yet its relationship to primary open-angle glaucoma is debatable despite multiple disease mechanisms that are common to both diabetes and glaucoma.2

Glaucoma is the leading cause of irreversible blindness in the world, with the number of people with glaucoma estimated to be 76.0 million in 2020 and 111.8 million in 2040.3 Results from numerous studies have demonstrated an increased risk of developing glaucoma in patients with diabetes.4-6 However, many studies have determined that having diabetes does not impact the development of glaucoma.7-9

Diabetes as a neurodegenerative disease

These neuropathic changes include apoptosis of retinal neuronal cells, glial cell activation, glutamate excitotoxicity, decrease in neuroprotective factors, and impairment of neurovascular coupling.2,10 DRN can be detected clinically using optical coherence tomography (OCT) to show thinning of the peripapillary retinal nerve fiber (pRNFL) layer and ganglion cell complex.10-13 These neurodegenerative changes, in addition to other impairments related to diabetes, can confound the assessment for glaucoma.

Diabetes affects both the inner and outer retinal structures with subsequent impairment, as well as other ocular structures that can potentially affect the evaluation for glaucoma. These changes can be seen clinically in intraocular pressure (IOP) measurements, pachymetry, visual field testing, and OCT scans.

IOP has been shown to be higher in patients with diabetes.5,14,15 Several hypotheses offered in support of this finding are that higher IOPs seen in patients with diabetes may be related to a slightly thicker central corneal thickness (CCT), changes in the biomechanical properties of the cornea, or a decrease in aqueous outflow because of alterations of the trabecular meshwork caused by an accumulation of advanced glycation end products.15 However, the IOP difference seen in patients with diabetes vs patients without diabetes is relatively small and likely not clinically relevant. The CCT of individuals with diabetes are also slightly thicker than those without diabetes, albeit also by a small and likely nonclinically relevant amount.15 However, results from a small cross-sectional study found the increased CCT seen with increasing severity of peripheral neuropathy to be clinically significant.16

Diabetic retinopathy is often an exclusion factor in glaucoma trials largely because of the known impact of retinopathy on visual field studies and the retinal nerve fiber layer. However, visual field defects in patients with diabetes have also been shown to occur in the absence of retinopathy, suggesting that neuroretinopathy occurs prior to visible retinal lesions.18 These defects are more readily seen with frequency doubling technology and short wavelength automated perimetry vs standard automated perimetry.17-19

OCT is used in glaucoma evaluation to image structural damage from glaucomatous optic neuropathy. However, thinning of the pRNFL and ganglion cell layer (GCL) thickness is not specific to glaucoma. An overlap of OCT findings from DRN exists that can confound the assessment of glaucoma. Results of studies evaluating pRNFL in patients with diabetes have identified a reduction in pRNFL thickness compared with age-matched norms even in patients without active diabetic retinopathy.20,21

Ganglion cell analysis has been found to be comparable to pRNFL in the diagnosis of glaucoma.22 OCT scans concentrate on the macular GCL thickness because the macula has the highest density of retinal ganglion cells.23 However, diabetes can damage the macula from diabetic macular edema (DME) and macular ischemia. Similar to pRNFL thickness in patients with diabetes, the GCL is thinner in those with diabetes compared with healthy controls even in the absence of diabetic retinopathy.24-25 The early damage to the neural retina from DRN is independent of, and occurs before, diabetic vascular changes. The pattern of ganglion cell-inner plexiform layer (GCIPL) loss from diabetes has been found to be diffuse and involves all sectors.25

Newer technology such as OCT-angiography (OCTA) provides insight on structural and angiographic changes in diabetes and glaucoma. Evaluation of peripapillary capillary density, superficial capillary plexus density, and deep capillary plexus density reveals no differences in the 2 conditions because both lead to significant capillary density loss. This overlap of OCTA findings of glaucoma and diabetes demonstrates that although the mechanisms of inciting injury on the retinal ganglion cells are different, the pathologic process results in similar modes of neuroretinal inflammation and degeneration.26

Results from studies have shown the reduction in pRNFL thickness can continue up to 3 years post PRP.29 However, newer lasers such as pattern scanning laser or Pascal system have less impact on pRNFL and macula thickness because of less thermal damage to the retinal layers.30-31

Anti-VEGF intravitreal injections have become the treatment of choice for center-involving DME and play a role in the management of PDR.32,33 However, it has been proposed that VEGF-A has neuroprotective, neurotrophic, and neurodevelopmental properties. Therefore, the use of anti-VEGF may exacerbate retinal ganglion cell death, especially in eyes at risk for or with glaucomatous damage.34

Additionally, repeated intravitreal injections of anti-VEGF have been found to cause sustained elevation of IOP in 6% of patients. This is believed to be an immunological reaction related to inflammation and can significantly impact patients with glaucoma and increase the risk for progression and their management of IOP control.35

The relationship of diabetes and glaucoma is complex. Laboratory studies and the pathophysiology of the 2 conditions suggest they are strongly related. The mechanism of diabetes-induced neurodegeneration and glaucoma lead to similar pathologic processes that may be difficult to differentiate clinically. In addition, the treatment of diabetic retinopathy may impact and confound the assessment for glaucoma.

Further studies are needed to better understand the direct relationship of the 2 conditions. Clinicians should consider the impact of diabetes on the assessment and management of their patients with glaucoma. 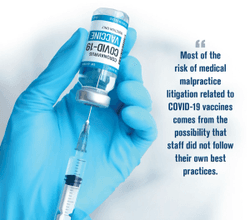 COVID-19 vaccines and medical liability: What physicians need to know