How to diagnose angioid streaks

Angioid streaks are a rare but potentially visually debilitating condition that present a unique challenge to the average eyecare provider. Learning to recognize its clinical presentation is just a start in an often difficult diagnosis to differentiate it from other similar retinal presentations. Ultimately understanding its association with a variety of systemic diseases is essential in successfully identifying and mitigating its link to vision loss.

It’s safe to say that the subject of angioid streaks seldom crosses our minds after National Boards. At best, they remain an obscure footnote from our optometric education with little to no impact in our daily practices.

Rarely seen let alone recognized, their presentation can confuse even the most experienced optometrist. Let’s briefly reacquaint ourselves with this seemingly exotic retinal finding to take some of the mystery out of its diagnosis and clinical significance.

Related: A closer look at the retina in multiple sclerosis

Angioid streaks are typically seen in patients with a history of inherited disease. The most common systemic disease associated with its presentation is pseudoxanthoma elasticum (PXE) that follows an autosomal recessive pattern.

Ehlers-Danlos Syndrome (EDS) and Paget’s disease, the next two most commonly associated diseases, have an autosomal dominant inheritance association. The various hemoglobinopathies associated with angioid streaks, of which sickle cell trait is the most common, also have a well-documented genetic link.1-5

Angioid streaks arise from an alteration in Bruch’s membrane due to visible crack-like dehiscences in the tissue coupled with an atrophy of the overlying retinal pigment epithelium (RPE).1 They are not simply a benign retinal entity but can present a serious risk to vision-if untreated, they can lead to macular choroidal neovascularization (CNV) and subsequent central vision loss.

Although past treatments such as laser photocoagulation, transpupillary thermoplasty, and macular translocation surgery have been the accepted treatments in the past, their use has proven frustratingly ineffective. The advent of photodynamic therapy (PDT) and anti-vascular endothelial growth factor treatments (anti-VEGF) have recently shown much promise as less destructive and more effective ways to treat the problem.1

Angioid streaks were first discovered in 1889 by Robert Walter Doyne.2 A few years later, Dr. Hermann Jacob Knapp coined the term because he thought their presentation was suggestive of blood vessels.3 Researchers in the 1930s were able to describe their histological makeup and location in Bruch’s membrane of the choroid.1

Further analysis described them as being an elastic degeneration prompted by iron deposition and secondary mineralization of the membrane which can lead to compromise of the structure’s integrity resulting from hemolysis, nutritional stasis, and eventual vessel occlusion.1

Angioid streaks are located within the body of Bruch’s membrane. As part of the choroid, this highly vascular tissue helps to provide the retina with a steady blood flow that ensures proper health and function. Bruch’s membrane is located below the RPE/choroid interface, Haller’s and Sattler’s layers, and the choriocapillaris.

Within its layer are located the collagenous zone, central band of elastic fibers, and outer collagenous membrane. Crucially, Bruch’s membrane depends on the presence of this connective tissue that allows the layer to buttress the overlying structure to lend it stability and good metabolic integrity.4

The emergence of angioid streaks and their fissure-like presentation is due to a breakdown the Bruch’s membrane through elastic degeneration, calcification, iron deposition and secondary mineralization. This compromise subsequently triggers small vessel occlusion that can lead to nutritional stasis and prompt choroidal neovascularization and hemorrhaging.5

Angioid streaks present as radial spokes emanating from the optic nerve head and seldom extend beyond the equator of the orbit. Unlike other similar presentations such as lacquer cracks, they don’t radiate from the center of the posterior pole.

The streaks appear as gray or even red lines with a ring-like presentation around the optic disc in 27 percent of cases and radiate outwardly from the peripapillary area in 73 percent of these patients.1

The condition is bilateral and rare, with roughly 50 percent being idiopathic in nature. The other half of cases can be directly linked to a variety of systemic diseases, whose common theme includes a compromise of connective tissue.

Related: Diagnosing CHRPE lesions can be a challenge for ODs

Another clinical presentation is the “peau d’orange” (orange peel) or dimpling of the retina as well as the emergence of focal chorioretinal scars (salmon spots) and optic nerve drusen. These drusen can often antedate the appearance of angioid streaks.1 In the case of some patients with Paget’s disease, there can also be an associated optic atrophy.1,6,7

Although rare, PXE is the most common of systemic diseases that presents with angioid streaks.

Due to a defect in the ABCCG gene of Chromosome 16, PXE is often considered more of a metabolic rather than structural disorder. A breakdown leads to the hyper-calcification of connective tissue.1,8

Clinically, the disease manifests dermatologically in the form of cutaneous laxity accompanied by small, yellow papular lesions easily identified during a normal medical evaluation. The laxity is often seen as redundant folds in the skin on the neck (“chicken neck”) and armpit.

Ocular signs include distinctive dimpling of the posterior pole and, of course, angioid streaks. In more severe cases, these patients can also have concurrent cardiovascular complications such as mitral valve prolapse and gastrointestinal complications involving the calcification of the sub-mucosal vessels, GI bleeding, and hematuria.1,8

EDS is a rare autosomal dominant connective tissue disease that involves a mutation at the COL5A and COLA4A loci.1 The disorder is highlighted by a defective collagen production and formation as well as hydroxyline deficiency. This is what causes a characteristic skin hyperelasticity, hypermobile joints, and various musculoskeletal anomalies.

Systemic effects can include cardiovascular disease that may result in catastrophic cases of dissecting aneurisms, spontaneous rupture of large blood vessels, and mitral valve prolapse.

Gastrointestinal disorders in EDS include diaphragmatic herniations and diverticula of the GI tract.

No cure for EDS exists, and treatment is mostly reparative and remediative in the form of corrective orthopedia surgery and/or physical therapy.3,4

EDS can be classified by the extent of the disease’s effect. Classifications include classical (Type 1,2), hypermobile (Type 3), vascular (Type 4), kyphoscoliosis (Type 6), arthocholilisia (Type 7A/B), and dermatosparaxis (Type 7C) in their order of frequency.

Related: When diabetes goes from bad to worse

EDS should not be mistaken with Marfan syndrome, which can also present with ectopia lentis and scleromalacia as well as bone deformities (Arachnodactyly) and cardiovascular insufficiencies.1,5

Paget’s disease is typified by an enlargement and/or malformation of the large and long bones (femur, pelvis, lower lumbar area, and cranium). Its etiology has been debated as being of either viral or genetic origin. The viral etiology theory suggests that pre-exposure to paramyxoviruses (not unlike the canine distemper virus) is implicated in the interference to bone construction (osteoclasts). Another theory proposes a genetic predisposition to bone formation compromise involving the mutation at the SQSTM1 loci of Chromosomes 5 and 6.1,6

The progression of Paget’s disease includes osteoclastic (reabsorptive), osteoblastic (compensatory bone formation), and ultimate malignant degenerative phases. The end state results in disorganized bone structure (“woven bone”) that is suspectible to fracture. Contrary to the common myth, Paget’s disease is not associated with osteoporosis, but it can lead to debilitating osteoarthritis, cardiovascular disease, kidney stones, and neurologic signs and symptoms.

In some severe cases, there can be an increase in intracranial pressure (ICP).

Treatment includes biphosphate therapy and vitamin K treatments-although this latter intervention has not been found to be clinically effective.7

This autosomal recessive disease currently affects millions of people primarily in sub-Saharan Africa where the trait appears to have originated. It is estimated that 300,000 new cases are diagnosed annually in Africa, with 100,000 cases identified in the United States.10 9 The genetics of the disease is well established with homogenous and heterogenous (carriers) exhibiting different clinical presentations and prognoses.9-11

The pathogenesis of sickle cell includes the collapse of red blood cells (“sickling”), followed by a vaso-occlusive phase which leads to ischemia and painful necrosis of the blood vessel wall. The initial vaso-occlusive stage creates peripheral retinal hemorrhaging (“salmon patch”). Compensatory neovascularization and ensuing fibrosis leads to a classic “sea fan retinopathy” presentation that optometrists have learned from their early training as one of the signature signs of sickle cell retinopathy.11

In the case of homogenous disease, splenic sequestration (splenomegaly) and aplastic crisis occur with resulting pallor, tachycardia, and fatigue. The subsequent hemolytic crisis can cause variable elevations and drops in hemoglobin levels (Hg). The lifespan of healthy red blood cells (RBCs) is 90 to 120 days, whereas sickling RBCs last only 10 to 20 days. This compromise of red blood cells and the ensuing physiological collapse in the patient leads to a significant degradation in quality of life and reduced life expectancy.9-11

Management has involved the use of folic acid, antibiotics (PCN), anti-malarials and neo-plastic treatments (hydroxyurea). Transfusion therapy as well as bone marrow and stem cell transplants have been tried with variable success.11

• Safety glasses: To prevent trauma-induced damage that can lead to catastrophic retinal hemorrhaging and vision loss

• Laser photocoagulation: Used traditionally but since discredited due to the high incidence of CNV relapse and associated retinal damage.1,12 This modality involved using a green argon or krypton laser as a prophylactic method to mitigate CNV

• Transpupillary thermotherapy: This method uses a diode laser at a lower threshold that has better ocular penetrance, is more selective in the tissues treated, and causes no laser burns. It, however, has been found to have little to no effect on curbing the progression of CNV1

• Macular translocation surgery: Involves moving macular tissue to a new retinal location away from any areas of new vessel growth. This treatment is seldom used and the lack of cases has prevented researchers from adequately assessing the validity of this intervention1,13

• Anti-VEGF injections: This is the most recent (and hopeful) therapeutic intervention that has come along to help to control the devastating impact of angioid streak related CNVs. Studies are ongoing regarding this intervention’s full potential1

Related: Why the periphery matters in DR progression

Angioid streaks are a rare but potentially visually debilitating condition that present a unique challenge to the average eyecare provider. Learning to recognize its clinical presentation is just a start in an often difficult diagnosis to differentiate it from other similar retinal presentations. Ultimately understanding its association with a variety of systemic diseases is essential in successfully identifying and mitigating its link to vision loss. 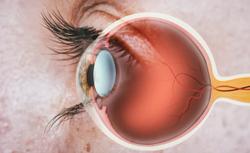 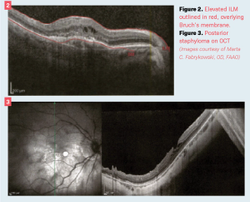