Education brought the patient and doctor to the same wavelength 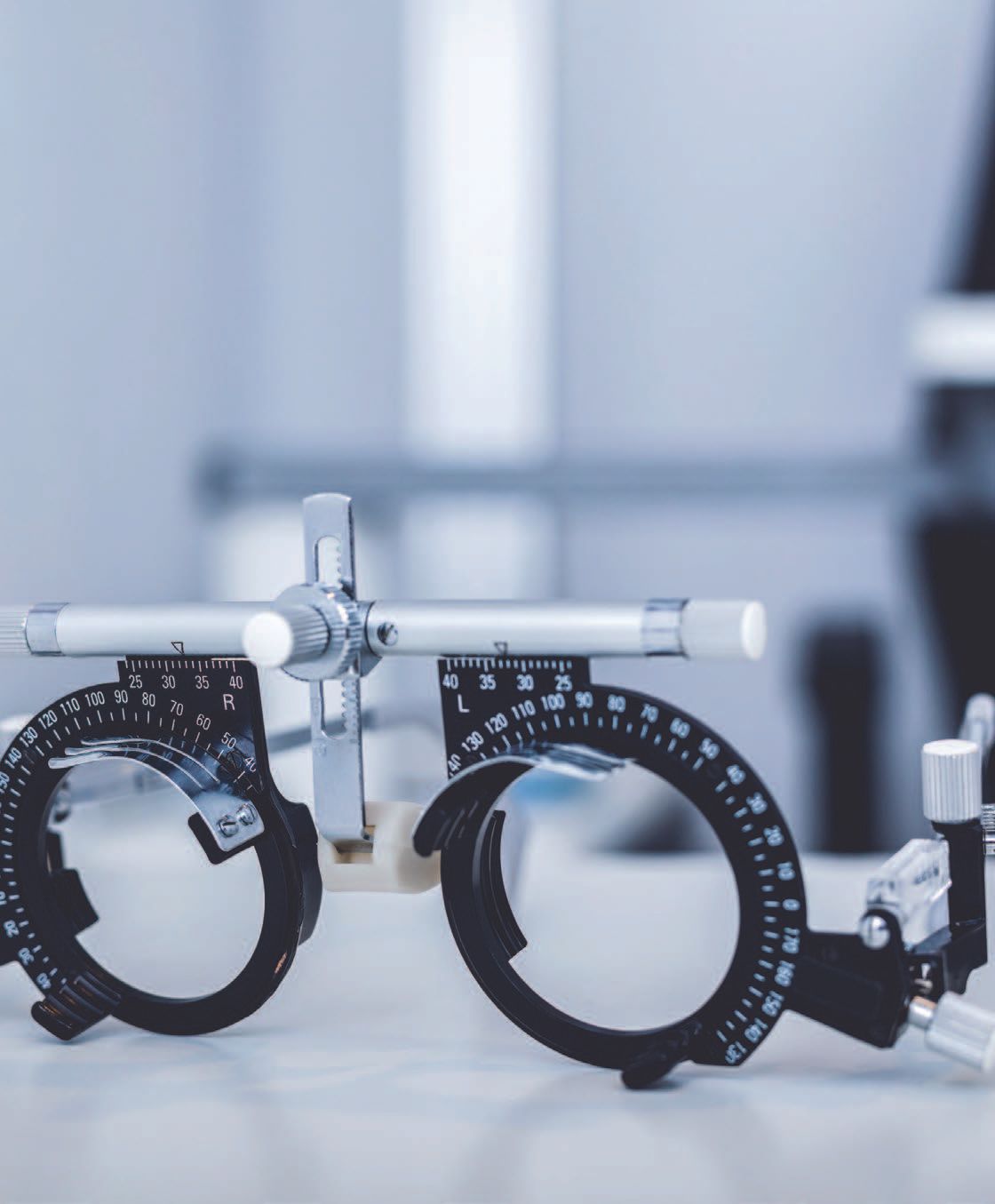 Glaucoma treatment can, in some ways and in certain contexts, be seen as a bad joke.

Imagine this conversation: “Sir, you have signs of glaucoma. Your intraocular pressure (IOP) is 28 mm Hg in each eye. Your optic nerves demonstrate a little of what we call cupping. Think of it as the donut being eaten away from the donut hole rather than from the outer rim. Your visual field studies look pretty good, but one metric called the glaucoma hemifield test is flagged for each eye’s visual field. This test here, performed by a tomogram that delves into the tissues of the back of the eye, shows thinning of the nerve fibers that converge to form the optic nerve in each eye relative to people who don’t have glaucoma. I know you just came in for a copy of your contact lens prescription and have no symptoms, but here are drops that will probably give you transient redness, which I can assure you is not as bad as untreated glaucoma.”

Sometimes that can be a tough sale, especially with respect to the patient who “feels fine, so nothing could possibly be wrong.” My own primary care physician and I once commiserated over this very scenario. He said he encounters it frequently in patients with systemic hypertension and high cholesterol.

His experience is typical with males who come in for a physical examination and receive a diagnosis of 1 or both of these conditions, decide they feel fine, and subsequently show up down the road whenever they feel like it.

I told him this is analogous to glaucoma: the “silent killer” and the “silent blinder” going hand in hand. As with blood pressure, IOP must be high before symptoms emerge.

She has a family history of cataracts but no known family history of glaucoma. She is a low hyperope and presbyope and first presented to me because I gave a community talk about the importance of comprehensive eye examinations. (I should do more of that.)

When she first presented at my office, she complained of blur that was easily alleviated with a new pair of glasses. Her IOPs, however, were 32 mm Hg OD and 34 mm Hg OS.

Her optic nerves looked healthy with vertical cup-to-disc ratios of 0.3 in each eye, no notching in either eye, and healthy nerve fiber layers in each eye. I took dilated optic disc photographs and invited her back in a week for a glaucoma work-up. At that visit, which was in the morning as opposed to her first visit in the afternoon, her IOPs were 30 mm Hg in each eye. Pachymetry showed thin to average central corneal thicknesses for each eye, and gonioscopy showed angles open to the ciliary body with mild pigmentation in the trabecular meshwork and a flat iris approach in each quadrant for both eyes.

I explained to the patient that her condition was ocular hypertension or very mild glaucoma but that, either way, her IOPs were high enough to treat. So, I prescribed a generic prostaglandin analog and invited her back in 6 weeks for an IOP check. She returned but told me that there was no way she was taking any drops because those that I prescribed made her eyes “light up like a Christmas tree.”

I had explained the known and common adverse effects (AEs) of topical prostaglandins. With that said, her eyes were very injected. Her IOPs were at target, however. My target was 21 mm Hg to 24 mm Hg for each eye. I explained that we could try another class of medications. She was adamant and said, “No. More. Drops.” I explained the options of laser procedures and minimally invasive surgical procedures and offered her a referral. She said there was a 0% chance of that happening.

I managed to convince the patient that the worst thing would be to leave her IOP untreated. Beta blockade was contraindicated due to her COPD. So, I gave her a sample of an alpha-2 agonist and managed to convince her to use it 3 times each day and come back in 3 weeks. I also asked her to call me any time if she experienced undesirable AEs.

The patient returned for her follow-up appointment and was happy. She reported good drop adherence and a desirable AE: Her eyes appeared brighter and whiter to her. Her IOP was 23 mm Hg in each eye, and her optic nerves, IOPs, and visual field studies have been stable for several years now. This patient took some convincing, but educating her at length eventually put us on the same wavelength. 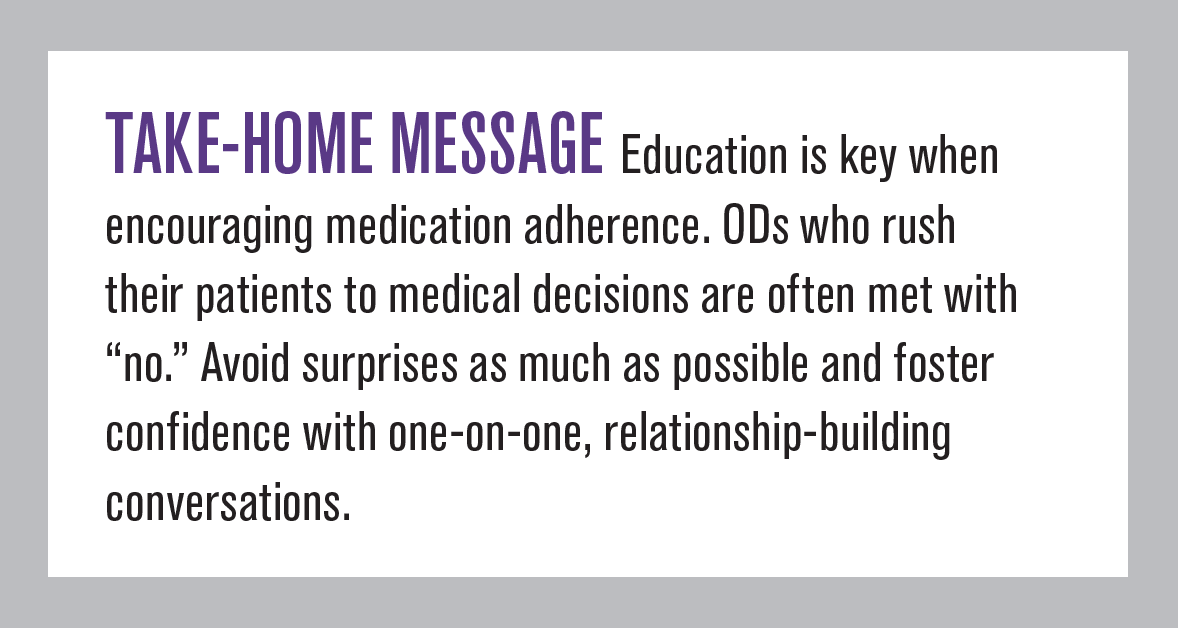 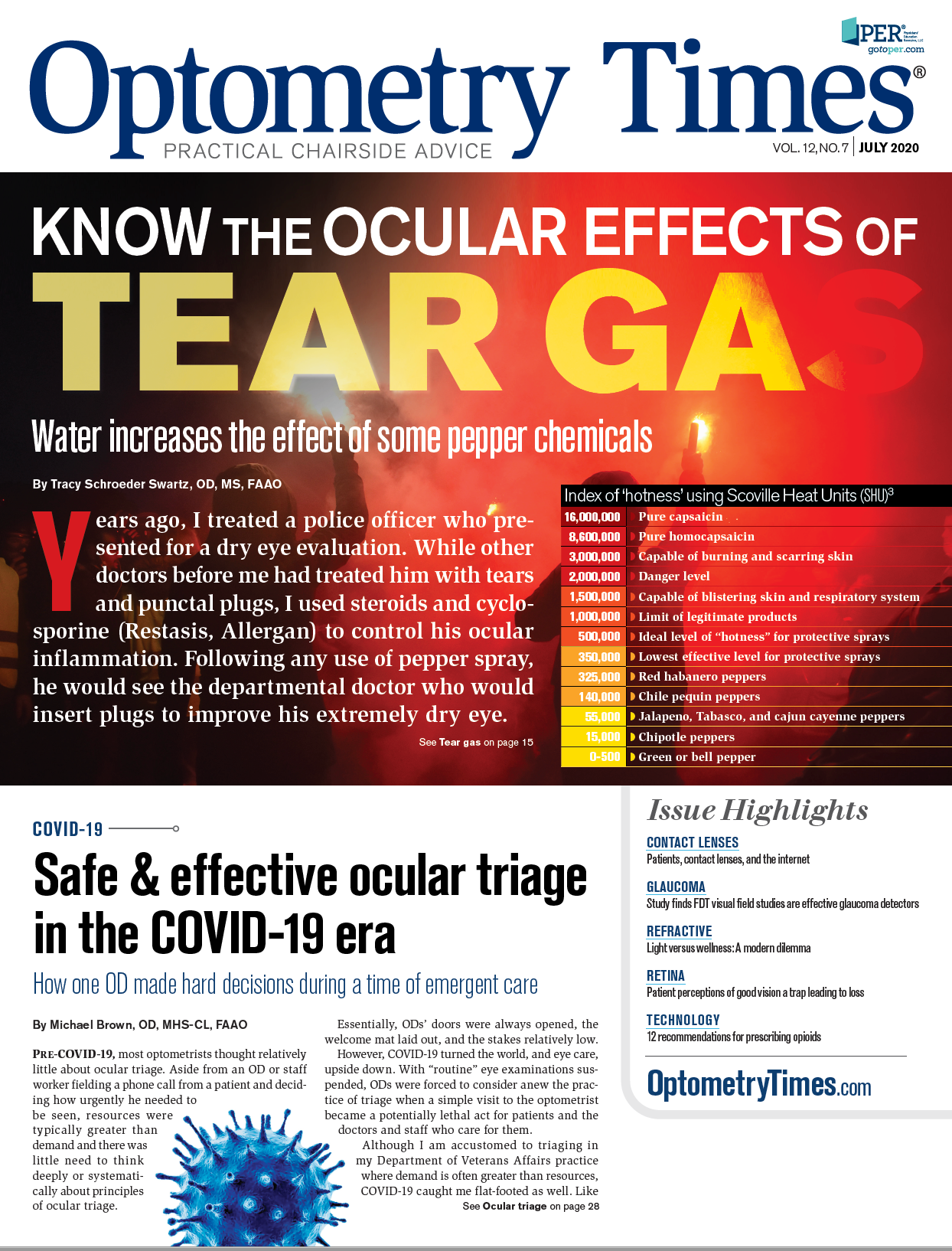