Identifying and responding to child and elder abuse

In both child and elder abuse, timely intervention can save a life. All members of the eyecare community must be aware of the signs and symptoms of abuse and their responsibilities in reporting to appropriate authorities.

Each day, five children die in the United States from abuse or neglect. Three quarters of these children are under age 3.1

Abuse and neglect data are equally grim for the elderly. About 10 percent of elders age 60 years and older have suffered abuse.2

Keeping an eye out for abuse

In light of these statistics, healthcare professionals need to be aware of the signs of child and elder abuse and their responsibilities in reporting abuse to the appropriate authorities.

Forty percent of abused children will have ocular findings. In 5 percent of cases, an eye problem will be the initial complaint. Because the ophthalmic technician is often the victim’s first contact within the ophthalmic home, it is important that technicians are familiar with the aspects of history and examination that are characteristic of abuse cases.

When taking a history, technicians should note incompatible injuries wherein the history of injury does not match the damage produced. In addition, wounds in different stages of healing without good history to explain multiple traumas should raise suspicions. Mouth wounds and skin burns are commonly seen in abused children. Another key point in the history are delays to care and multiple hospitalizations in different medical facilities without good explanation.

Children who have been sexually abused will often exhibit behaviors that are overly sexual or fearful. Children will somaticize, complaining about stomachaches; new onset bed-wetting has also been reported. The diagnosis of a sexually transmitted disease in a young child who is “sexually naÃ¯ve” can confirm suspicions.

Children who are emotionally abused can also somaticize with new onset of headaches and stomachaches. A sudden change in self-confidence and abnormal fears may develop as well as failure to thrive in the younger child. The older child may develop a voracious appetite.

Ocular signs of physical abuse are similar to other traumas. Ecchymoses, hemorrhages around and within the eye, and signs of direct trauma such as subluxated lenses, cataract, atrophy of the optic nerve, and choroid or retinal scars are all suspicious within the context of an incompatible history of trauma.

A particular type of physical abuse in the infant was identified by Caffey in 1974, “shaken baby” syndrome.3 This condition, now called abusive head trauma (AHT) occurs when the young child is shaken, dropped, or sustains direct blows to the head. Children with this condition rarely show outward signs of trauma but often will sustain brain damage and suffer from seizures. 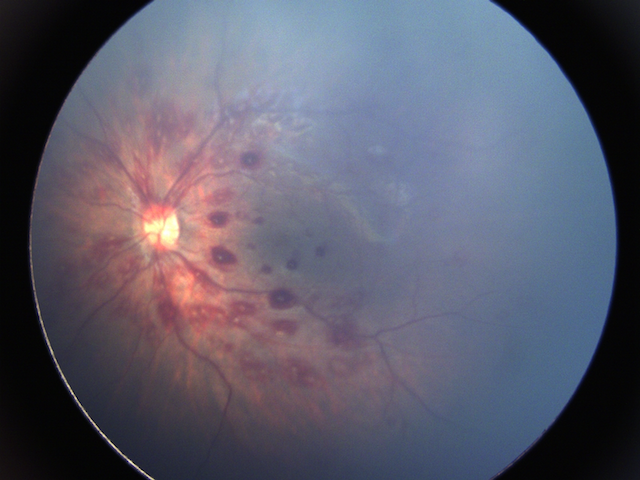 The eyecare professional becomes key to the diagnosis by detecting retinal hemorrhages associated with AHT and documenting them with retinal photographs. The sequelae of AHT are grim. One third of children die from their injuries. Many surviving children will suffer brain damage from their injuries. Premature infants, children with multiple medical problems or developmental delay are at increased risk of AHT.3

A careful history and a thorough examination are important when a healthcare professional suspects child abuse. Masquerade syndromes like osteogenesis imperfecta, nutritional deficiencies, hereditary sensory neuropathy and congenital syphilis may be mistaken for abusive injuries. However, most of these conditions can be distinguished through appropriate testing.

In the same way, “bruises” may actually be Mongolian spots seen in deeply pigmented babies, or conditions associated with easy bruising such as coagulopathies, vasculitis, certain malignancies, or exposure to salicylates or rodenticides. Cultural therapies such as cupping, coining or moxibustion (the burning of traditional Chinese medicine herbs on or near the skin) can also leave marks. Although these treatments are non-conventional, they are not usually abusive in nature. In addition, Florida and other states grant exemption from prosecution to parents who choose spiritual healing rather than conventional medical therapy.

When approaching suspected victims of child abuse, it is important to emphasize that they are in a safe place. Listen to their feelings in a non-judgmental way. Assure them it is OK to feel sad, confused, or scared about what’s going on. Tell them it’s not their fault-children assume they are abused because they are “bad.” It is important for the healthcare professional to reassure them that is not the case.

Elder abuse and neglect have many similarities to child abuse. The frail elder and the silent youngster are both unable to defend themselves. Many times, they are dependent on their abusers. In both situations, the number of victims continues to rise.4

Elder abuse and neglect is most often seen in the oldest elders. Female victims predominate. In addition to physical, sexual, and emotional abuse and neglect, elders are at risk of fiduciary exploitation. In the home, 75 percent to 90 percent of abusers are family members, especially those with a history of drug abuse or financial dependence on the elder.5

Physical abuse of the elderly manifests as bruises and broken bones. In the eye clinic, broken eyeglasses and frames may be seen. The key, once again, is in the taking of a history. Is the history consistent with the injury?

In the case of sexual abuse, evidence of sexually transmitted diseases should raise concerns. Emotional and psychological abuse may render the elder withdrawn, non-communicative, or depressed. A lack of hygiene or feelings of isolation can be seen with neglect.

If there is a suspicion of abuse or neglect, the eyecare professional may wish to excuse the family members from the examination room for a frank discussion with the elder. Elders often do not wish to report abuse because the perpetrator is often a family member or needed caregiver. Emotions such as shame, love and/or dependency on the abuser or fear of reprisal may prevent the elder from acknowledging their abuse or neglect.

The determination of abuse or neglect in the elderly is clouded by the high degree of chronic medical conditions in this population. These may mimic the signs of abuse. As with child abuse, masquerade conditions can be seen. Dementia can be a confounding factor. A thorough history and physical can help determine if a report of possible elder abuse should be made.

In both child and elder abuse, intervention is mandated. Once abused, the individual is at increased risk of further abuse. If injured again, the abused individual is not likely to return to the same medical office. This clinic-hopping makes a pattern of inconsistent injuries harder to detect. Therefore, a reasonable suspicion warrants intervention.

Reporting suspected abuse is law in all 50 states.6,7 All practitioners of the healing arts, including ophthalmic technicians, are held to this standard. Good faith reports are protected from civil liability. In some states, failure to report carries penalties. Licensed medical personnel are exempt from prosecution and, when they suspect abuse, are authorized to take pictures and obtain other evidence of abuse such as radiology studies without parental permission. As with any form of evidence, these materials must be secured and the chain of custody maintained.

Anyone can report suspected child abuse to the local county Child Protective Services office. If the reporter is unsure of contacts in the local area, the National Child Abuse hotline (1-800-4-A-CHILD) can help.

In suspected cases of sexual abuse in both children and elders, local law enforcement agencies must be notified.

Suspected elder abuse should be reported to the local county Adult Protective Services agency. If one is unsure where to report in a particular area, the Administration on Aging Eldercare Locator (800-677-1116) can help identify the appropriate reporting agency. In the case of suspected abuse of a patient in a long-term care facility, the local long-term care ombudsman may be helpful.

In both child and elder abuse, timely intervention can save a life. All members of the eyecare community must be aware of the signs and symptoms of abuse and their responsibilities in reporting to appropriate authorities. Early response can lead to early intervention and a better outcome for our patients.