Most of us would probably say that the vast majority of our patients are quite satisfied with the care they receive in our offices. But how do we know this for sure?

Most of us would probably say that the vast majority of our patients are quite satisfied with the care they receive in our offices. But how do we know this for sure? At the end of the day, our job is to make patients see and feel better. Maintaining and growing an optometric practice is all about patient satisfaction. So what percentages of optometrists are really taking the time to find out if our patients are truly satisfied? And furthermore, what exactly are we doing correctly to drive future patient satisfaction? Understanding this data on our patient experience is essential to the health and vitality of our practices.

Why it is important to understand patient satisfaction

There are many reasons why I believe it is important for every practicing optometrist to understand the rate of patient satisfaction in their offices, but more importantly, ODs need to know why are some patients dissatisfied with the services they receive. We all want to make 100 percent of our patients completely satisfied with their experience, but we also know that a 100 percent satisfaction rate is essentially impossible to achieve. So, what rate of patient satisfaction is acceptable? Is it 90 percent? 95 percent? 99 percent? What does it need to drop below for you to identify that a problem exists that needs to be confronted, adjusted, or changed? Identifying that target number and taking an honest look of where you fall on that spectrum will help you gauge the amount of work you will need to do in order to change a negative trend.

How to improve patient satisfaction

Understanding what makes a patient dissatisfied is one of the best ways to drive an improved patient experience. Patient satisfaction measures are somewhat universal and common to all practice types. Factors such as waiting time, appointment availability, thorough doctor examination, and successful treatment plan are important factors in a general eyecare practice. Specialty surgical practices, such as refractive surgery centers, often have difference indicators of patient satisfaction. Patient dissatisfaction in surgical practices often include patients with complications or unexpected outcomes.

Is your patient healthy enough for LASIK?

In a recent report by Erickson, LASIK patient satisfaction is determined by both visual (uncorrected visual acuity [UCVA]) and non-visual factors such as post-surgical visual function, pre-operative patient expectations, and other psychological characteristics.6 Currently, we typically measure post-LASIK visual function in the exam room with high-contrast Snellen Visual Acuity tests. These tests do not access patients’ full quality of vision because they do not measure vision under poor illumination, such as driving at night. Tests such as low-contrast visual acuity and contrast sensitivity have been found to be helpful in identifying quality of vision problems in patients who measure 20/20 UCVA but complain of inadequate visual function.

A better understanding of a patient’s pre-operative expectations, such as the need for “perfect vision” or total spectacle independence, may help avoid the patient’s post-operative dissatisfaction. Psychological characteristics such as optimism, adaptability, and subjective sense of wellbeing are all traits that correlate with post-LASIK satisfaction. A greater increase in quality of life (QOL) is found after LASIK surgery as compared to spectacles and contact lenses. An increased sense of subjective wellbeing, adaptability, and a more optimistic attitude to life and increase perceived QOL after surgery.7 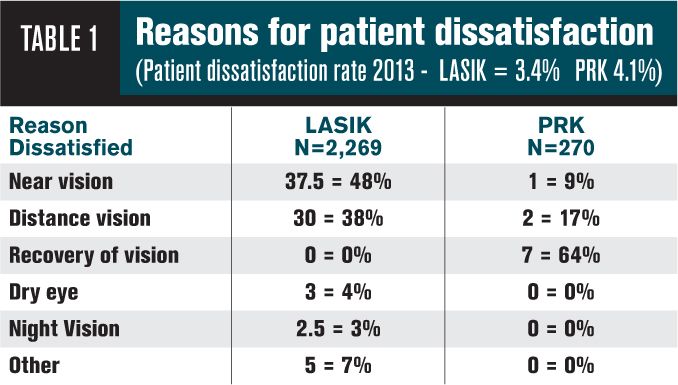 The largest shift over the past decade is the decrease in night vision disturbances and dry eye complaints-probably due to improvements in excimer and femtosecond laser technology. The emergence of presbyopic-related complaints may be surprising given the decrease in average age of patients having LASIK today. More patients are expecting total spectacle independence following refractive surgery, which may explain this trend. This highlights the need for all doctors who prepare their patients for LASIK surgery to spend more time demonstrating presbyopia with contact lens trials. Patients who select monovision as a surgical treatment target also exhibited an increased risk for additional laser treatment to maintain visual function as compared to patients who choose full distance correction in both eyes.

While it is clear we may never reach 100 percent patient satisfaction in our practices, it is important to measure our patient satisfaction. No matter your practice setting, understanding why your patients are dissatisfied is the first essential step in improving your patient’s satisfaction. Happy patients are a key to building a successful practice and maximizing your job satisfaction. And just remember, in today’s digital age, a dissatisfied patient can post his reasons for being dissatisfied to millions of people around the world at the touch of a button. So, be proactive and find out why those small populations of your patients are not happy, then make sure you have a firm action plan to reverse those issues.  Always remember to ask yourself “Are my patients satisfied?”-because if you aren’t doing so, your competition will.

How to handle a bad online review