Stephen Burns, PhD, professor and associate dean at the IU School of Optometry, designed and built an instrument, which uses small mirrors with tiny moveable segments to reflect light into the eye to overcome the optical imperfections of a patient’s eye. It takes advantage of adaptive optics to obtain a sharp image, and also minimized optical errors throughout the instrument. Using this approach, the tiny capillaries in the eye appear quite large on a computer screen. These blood vessels are shown in a video format, allowing observation of blood cells moving through the blood vessels. After imaging each patient's eye, highly magnified retinal images are then pieced together with software, providing still images or videos.

"We set out to study the early signs, in volunteer research subjects whose eyes were not thought to have very advanced disease. There was damage spread widely across the retina, including changes to blood vessels that were not thought to occur until the more advanced diseases states,” says Ann Elsner, PhD, professor and associate dean in the IU School of Optometry and lead author on the study.

The observed changes in the study, which was published in Biomedical Optics Express, included corkscrew-shaped capillaries, which were not just a little thicker, but instead the blood vessel walls had to grow in length to make these loops (see Figure 1). The changes are visible only at a microscopic level, but some of these patients already have sight-threatening complications.

"It is shocking to see that there can be large areas of retina with insufficient blood circulation," says Dr. Burns. "The consequence for individual patients is that some have far more advanced damage to their retinas than others with the same duration of diabetes."

Because the microscopic damage has not been observable prior to the study, it is unknown whether improvement in control of disease would stop or reverse any of the damage.

Impact of sleep on diabetes and diabetic retinopathy 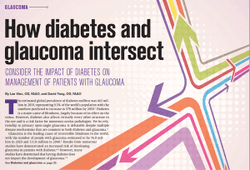