I grew up in Puerto Rico. Actually, I was born in Cuba during the Castro Revolution. My parents exiled to Spain and ended up in Florida, but I actually grew up most of my life in Puerto Rico. I attended third grade up to completing high school.

I grew up in Puerto Rico. Actually, I was born in Cuba during the Castro Revolution. My parents exiled to Spain and ended up in Florida, but I actually grew up most of my life in Puerto Rico. I attended third grade up to completing high school. 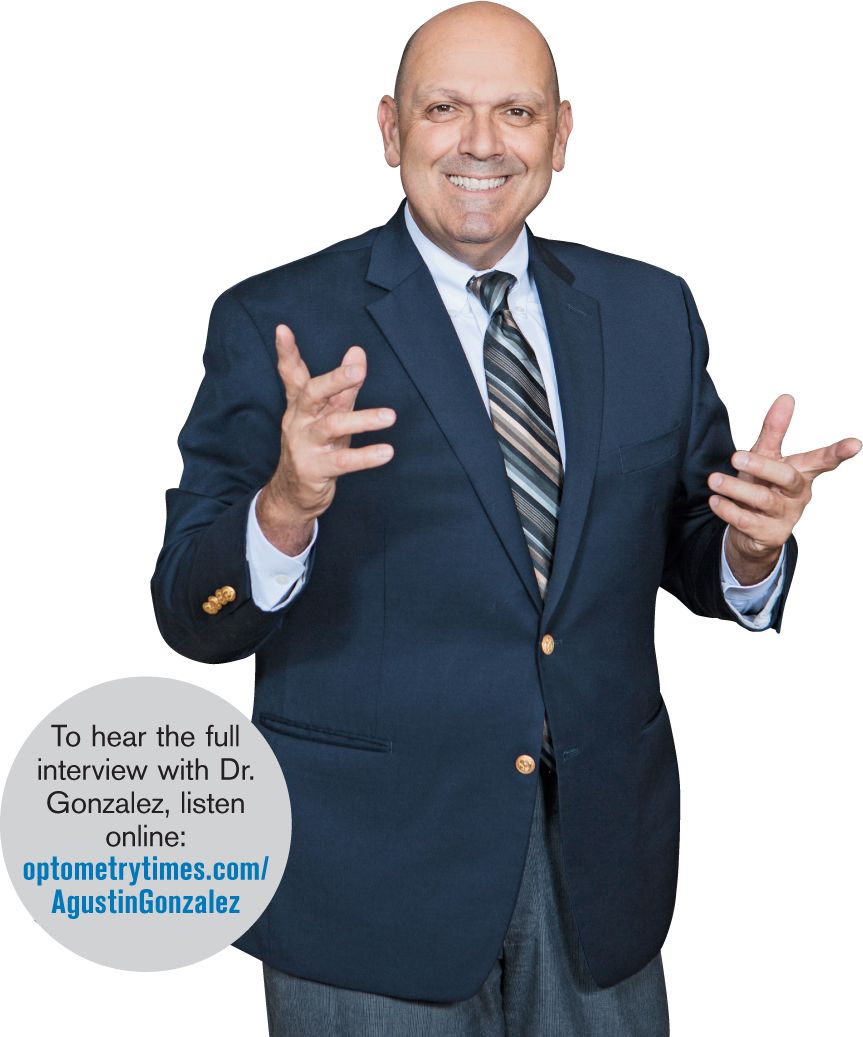 How did you get into optometry?

That’s a long story. There are two versions of this. They are both partially true. I wanted to do a PhD in marine genetics. It was in the Reagan years and budget cuts were slashing our research programs So, I decided to go back to Puerto Rico. I applied to dental school, and I applied to optometry school. I got accepted into both programs, but I did not know which program to choose. So, I drove to see the house of the president of the dental society and the house of the president of the optometric society-the bigger house was the optometrist’s house. The other story: I was dating a girl whose friend was going into optometry, and I also became interested. I was doing my real estate research, and I ended up studying optometry because of that influence. Besides, I was always near-sighted as a little kid. My mom took me to an ophthalmologist who had a Cuban optometrist working with him. It wasn’t like optometry was a foreign thing, but there were lots of twists and turn to get to where I am.

Why did you pursue the academic side of optometry?

I’ve always been interested in creating an impact in other people’s lives. I think academia is a phenomenal way of not only sharing your knowledge but also creating a foundation to be an influence in other people. I think that is a very honorable thing. I had experience teaching when I was in college-I was a teaching assistant, and  always enjoyed the camaraderie that you develop with the students. I enjoyed that you can become a mentor, a personal influence for other people. It’s a very noble endeavor. I look forward once my kids graduate from college to someday going back into academia, although I am still involved in academia as an adjunct professor with the school of optometry-I enjoy the academic setting. There’s a certain camaraderie and a certain magic to being a mentor that leaves a long-lasting legacy.

How did you become interested in the vision of owls?

Oh, it’s a long story. When I was in first-year optometry school, one of the Cornell professors came to visit the school; one of my professors was good friends with him. They studied not only the physiology of owls but the refractory aspects of the owl’s eyes. That fascinated me because you know the eyes are simple yet complex organs-it’s simple in the way it works but very complex in the way things have to happen for it to work. I became very interested in that. Back then, it was a big thing for me.

What brought you to Texas?

I became the dean of clinical affairs in Puerto Rico at a very young age, and I didn’t have the human resources skills to have that position. I did a number of changes in the school. Basically, I became stressed out with the job, so I decided to take a year off. I had a Texas license at the time. My wife’s sister was living here, and six months after we moved they ended up moving to Florida. But at the time we arrived, we thought we’d be here-and it’s been 20 years since I’ve been here.

How did you decide to go into private practice?

At one time I was managing a number of Pearle Vision optometry offices in the Dallas area. As with anything in retail, you are the poster child for how to do things right and then you become the poster child of part of the problem, of not doing things the way they wanted. So, pressure mounted for me to get rid of the operations, which I did. That moment in time I said I wanted to move the largest into a private practice. I wound up doing a lot of surveys and questionnaires to my patient population in order to see which would be the most effective transition from commercial to private practice, and it paid dividends. There was a moment there, year number two, where your amount of commercial patients starts dwindling down because your prices are going up, but your amount of prior patients starts going up because of the quality of services you’re delivering. That happened 10 years ago, and I’ve never looked back.

A long time ago, when generic Tobradex hit the market, I understood that it wasn’t as effective as brand-name Tobradex. So, I started looking a little bit more closely into what made the products different. Then with price increases in medications within the last five years, it’s become a hot topic. I realized that there is a big gap between outcomes and using the right medications. That got me interested in not only generic and brand medications but also the biochemistry and molecular pharmacology of medications. If there’s something that I tell all my students it’s that just because a drug is labeled by the FDA to be in a category doesn’t mean that they all work the same. You have to find the unique properties in the molecule or formulation that are better suited for a particular patient, and that’s going to improve your clinical outcomes. We all have great backgrounds in pharmacology-we take more pharmacology hours than the MDs. But the idea is if we do not discern how to properly use a medication, it becomes very difficult to attain the desired outcome.

What keeps you involved in clinical research?

Curiosity. There’s nothing better than learning something new every day. The older I get, the more I appreciate learning things. Clinical research is a way of having your ear to the ground for things that are new and coming and having a good grip of what’s going on clinically.

What do you do for down time?

The one thing I enjoy dong that relaxes me: I am a Dallas Symphony Orchestra season ticket holder. I’ve done that for seven years, and I’ve been a Dallas Opera season ticket holder for about 12 years. My favorite opera, there are so many, is Iolanta. It’s about a blind princess, so that’s one that resonates for a professional. My first opera was Rigoletto in Verona. I also saw Romeo and Juliet in the arena in Verona. My most commonly seen opera is Rigoletto at seven times. La Traviata, I love that score and every time I see it I’m never disappointed.

Yes, I should have started in private practice sooner. I’ve been an optometrist for 28 years, and I’ve been in private practice for 10 of those years. On the other hand, if I didn’t go through a cycle of going into commercial practice or having worked in a hospital environment, there are a lot of things I would not be doing nowadays. You know, I think no. I’ve had a good path, I’ve had a good grip on different modes of practice. I think that I am in the moment of time where I should be. I’m very comfortable with the way I practice and with the things that I’m doing. So, do I have any regrets? No, not really.

What’s one piece of social media advice you have for ODs?

Get involved and learn how it’s done-learn the nuts and bolts. Social media is so personalized. Delegating social media to another person is actually very inefficient. In order for social media to work, you need to understand what your needs are and how to voice that to your patient population. For example, my office has a unique set of propositions that are a little nontraditional from other optometrists. Being able to voice that you’re the expert in this particular part of optometry or eye care is more effective than spending money using social media and delegating it to somebody else.

Have kids. [laughs] Uh, OK, here we go. When I was in college, we used to cave dive in these sink holes in Florida to collect albino crawfish. We would go out about 120 feet, below sea level, diving for these little boogers to collect for our research. I grew up diving in Puerto Rico, and at the time we didn’t need any certification. More recently, I went zip lining in Puerto Rico on one of the longest zip lines in the world called Toro Verde or “green bull.” For a guy who’s not seeking adventure, I enjoy tipping my hat every once in a while.