Postoperative patients with PXF pose both short- and long-term concerns due to the underlying pathological changes that occur from the fibrillar deposition with some complications arising years after the surgery.

As discussed in the companion article (“Preoperative considerations in patients with cataracts and pseudoexfoliation syndrome,” December 2013), patients with pseudoexfoliation (PXF) have an accelerated incidence of cataract formation,1,2 and the surgery for cataract removal may be more complicated. These patients may require extensive preoperative testing, and they also demand increased postoperative vigilance, even after an uneventful phacoemulsification with endocapsular intraocular lens (IOL) placement.

Postoperative patients with PXF pose both short- and long-term concerns due to the underlying pathological changes that occur from the fibrillar deposition with some complications arising years after the surgery. This review provides a time-oriented approach to comprehensively assess patients with PXF who have undergone cataract surgery, beginning with immediately 24-hours after surgery.

It has been reported that intraocular pressure (IOP) spikes, within 24 hours, can reach over 30 mm Hg in 7 percent of patients.3 Postoperative IOP spikes are more common and may be higher than non-PXF eyes. Acutely high IOPs may necessitate topical hypotensive therapy, or oral diuretics such as acetazolamide or methazolamide may need to be used.

In rare cases, when IOP becomes dangerously high, some practitioners advocate for release of aqueous from the paracentesis.3 Any of the above cases require diligent in-office follow up.

Due to the decrease in integrity of corneal endothelial cells found in PXF eyes, often there is more intense and prolonged postoperative anterior segment inflammation.4,5 This potentially includes higher levels of aqueous flare with accompanied fibrinoid reaction, even leading to posterior synechiaes.

Such an increase in inflammation may necessitate a more frequent topical steroid dosing schedule, a stronger topical steroid, or, in rare cases, adjunctive cycloplegia. Of course, this follows with increased surveillance of the IOP and may require more visits.

Anterior capsular phimosis is another potential early postoperative phenomenon, slightly more common in eyes with PXF.6 It is characterized by contraction of the anterior capsule and potential decentration or tilt of the IOL in the X, Y, or Z plane. It may be beneficial to perform Nd:YAG laser relaxing incisions to the phimotic area of the capsule at the earliest sign.3

The long-term complications or effects after phacoemulsification in eyes with PXF are fewer but may be more serious than in the short term.

Even with uneventful surgery, decentration of the IOL may still occur many years postoperatively due to progressive zonular disintegration and capsular contraction.5 The actual incidence of postoperative subluxation/dislocation of an IOL in eyes with PXF is higher than eyes without PXF, and the mean is 8.5 years after the initial surgery.6

If the IOL is significantly displaced and affecting vision or causing friction, it may be managed by either repositioning the existing IOL in the capsular bag by suturing to sclera, iris fixation, or exchanging the IOL altogether (see Figure 2).3

As eyes with PXF have an alternation in the tissues of the anterior segment, the initial inflammatory response can sometimes linger for some time.2 Cells and flare may persist with or without an increase in IOP. This may require the use of increased topical steroids, with added use of topical hypotensives should IOP increase with the frequency of anti-inflammatories.

Conversely, there may also be longtime reduction in IOP after the bulky natural lens has been removed. IOP reduction after phacoemulsification has been noted in both PXF and non-PXF eyes, though some reports have noted that reduction is greater in eyes with PXF.2

In this similar vein, it is important to note that glaucoma concerns should be discussed in full prior to cataract surgery. This includes the previously mentioned possibility that IOP may be initially high, requiring adjunctive topical hypotensives, and then may lessen to a number lower than that prior to surgery. There is also a possibility that IOP may remain the same or become higher postoperatively, which may require further surgical intervention.

Posteriorly in the eye, macular integrity in eyes with PXF should be monitored closely. It has been found that eyes with not just PXF but those with PXF glaucoma are indeed at increased risk for cystoids macular edema (CME). Interestingly, iris trauma incurred during phacoemulsification, which is more likely to occur with patients who dilate poorly, like those with PXF, has been found to be a risk factor for CME.6 Postoperative use of topical NSAIDs may be beneficial in PXF eyes with glaucoma and have had iris trauma.

Special thanks to Jules Winokur, MD, for his insights and edits. 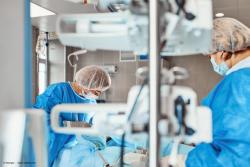