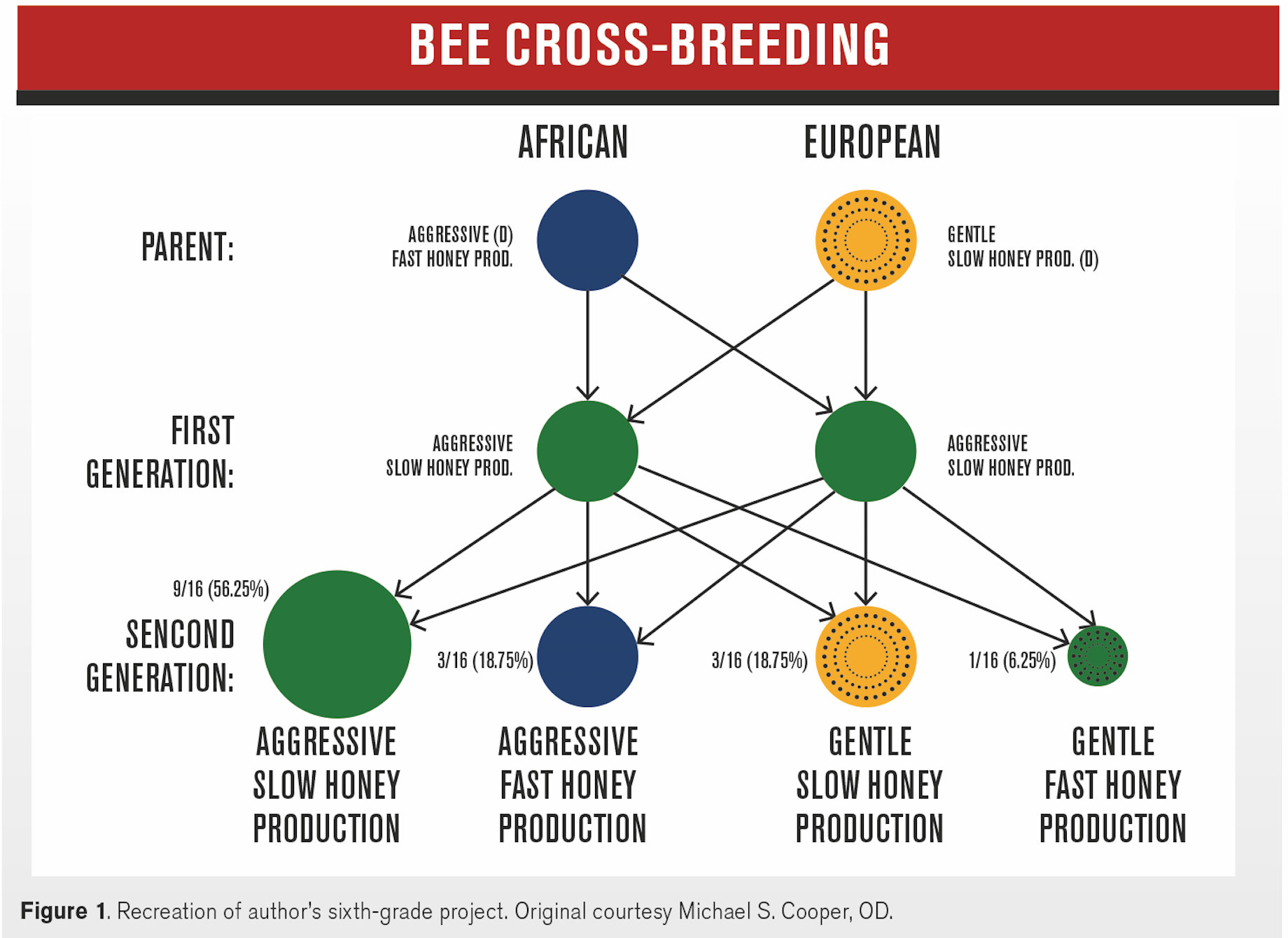 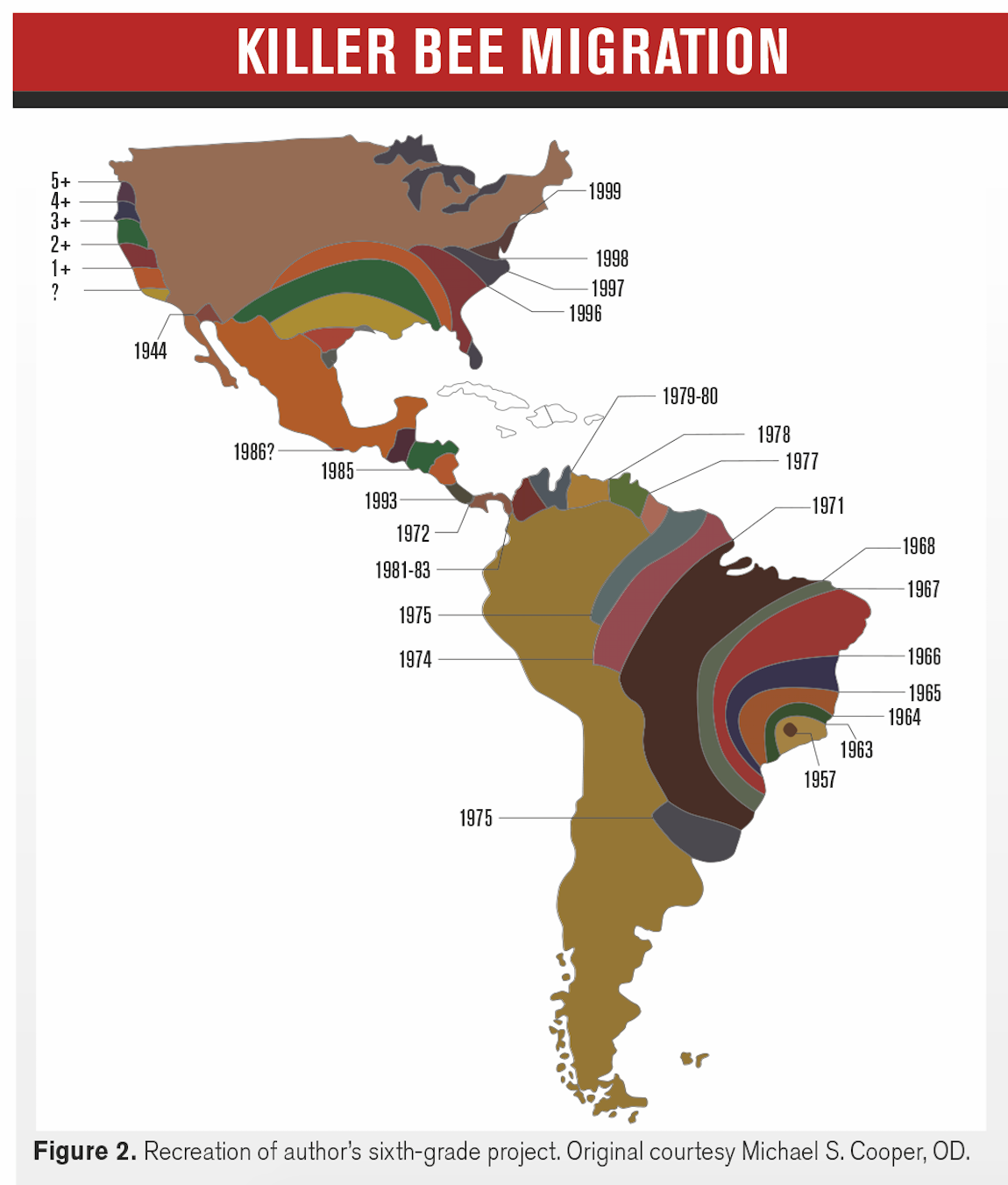 The benefits of bee pollen on health have been investigated for years. Dr. Michael Cooper examines how propolis, a natural wax-like resinous substance found in beehives, can help treat ocular disease.

With a delayed spring and allergy season this year, I began to think about how to shape the global warming discussion from an objective standpoint. It is certainly a hot topic in both media and scientific circles. Essentially, our world is changing whether we like it or not.

My realization of global warming started when I was in the sixth grade. My teacher Mr. Finnerty tasked the entire class with projects on how humans impact ecological change. As fortuitous as this might sound, the subject matter I tripped upon was killer bees (Figure 1).

Bees together
In the mid- to late 1950s, the Africanized Bees program in Brazil was touted to be the perfect marriage of the gentle Western European bee (Apis mellifera-specifically Italian and Iberian) and African bee (Apis m. scutellata) to increase honey production.1,2

Although these organisms blended the organization, consistency of the former with the rapid, frenetic nature of the latter for honey production, there were two important drawbacks.

The African bee was exceedingly territorially defensive, which dominated the genetic pairing with the European bee. This trait was further enhanced with a significant lack of interest in hive mentality and the penchant to chase a person to up to 400 meters or a quarter mile away, stinging 10 times more.3,4

Parallel propolis
The parallels might not seem apparent, but the dichotomy described can be brought back to inflammation and homeostatic balance. Inflammation plays a key role in maintaining normal systemic function, but if left unchecked the process breaks down.

Bees have a known hierarchy of certain jobs, including the construction of the hive. Propolis is a natural wax-like resinous substance found in beehives used by honeybees as cement and to seal cracks or open spaces in the hive. 5

The best sources of propolis are species of poplar, willow, birch, elm, alder, beech, conifer, and horse-chestnut trees.6 If the colony experiences a lack of propolis content due to disease and/or temperature variations, the hive composition will lack adhesiveness or be brittle-which could lead to structural failure.

It is now generally accepted that propolis is collected by worker honeybees from tree buds or other botanical sources in the north temperate zone. This zone extends from the Tropic of Cancer to the Arctic Circle.6

Tropical honeybees (Apis cerana, Apis florae, and Apis dorsata) and African Apis mellifera make no use of propolis due to their transient nature.8

This trend has resulted in propolis being produced in diverse forms for various maladies, including pharmaceutical and cosmetic products. Propolis is sold in many health food stores in pill forms, lozenges, cough syrups, toothpastes, rinses, shampoos, ointments, lotions, and cosmetics.11

The caveat is that these free aromatic acids can also act as sensitizers with 3-methyl-2-butenyl caffeate and phenylethyl caffeate as the major and benzyl salicylate and benzyl cinnamate as less frequent culprits.11-15

Researchers compared a 1 percent water extract of propolis (WEP) to dexamethasone 0.1% and saline to determine whether it was effective in controlling CNV in rabbits. By utilizing silver nitrate to cauterize a specific area of the cornea (5 to 5.5 mm), these animals were analyzed after seven days with significantly reduced signs treated with topical WEP 1 percent (41.0±14.1) and dexamethasone 0.1% (39.4±11.0) in almost equal proportions compared with controls.15

Investigators concluded that the anti-inflammatory activity of propolis might be related to its effects on the various mediators of inflammation such as prostaglandins, leukotrienes, and histamine.16,17