I didn’t at all anticipate the challenges I would face at being a clinician in industry. It really comes down to you’re a clinician, you make a decision, there’s a result, it’s either good or bad, and you adjust and adapt. In industry, at least initially, I didn’t know if what I was doing was making a difference.

I started my practicing with my father. We had a substantial geriatric population in the south Florida area. So, I decided to get into low vision. This would be a way I could grow the practice and help people. When you’re a young practitioner, you’re very inspired to help people. Unfortunately, when you’re dealing with people like that, they typically have other ailments that go along with it. They were angry and upset-they expected the solutions I was going to bring to them would restore their vision back to where it was when they were 20 years old. We just didn’t have those miracle solutions. It got a little frustrating. Down the street from us we had an upscale shopping center with a lot of younger people who had not been coming to our practice. I thought getting into contact lenses would be a nice way to deliver an incremental population to the practice, help it to grow, and do something more upbeat and positive. And so I delved into contact lenses and tried to learn as much as I could about that field.

How did you start your private practice, and what led you to academia? 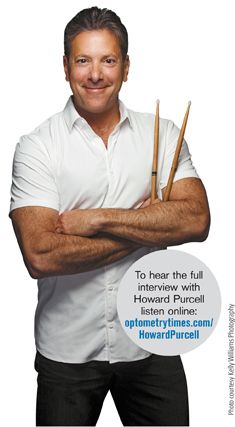 My father put me through optometry school, so I gave him 10 years of sweat and blood. I learned so much about the business side of practice from my father. About five or six years in, we heard about an optometry school starting in south Florida. Most practitioners in the area felt that was the worst thing that could ever happen. I was asked to be on the advisory board. I probably disagreed with everything the dean was talking about. I was very vocal about some of the decisions that they were making that I felt were not in line with my philosophy as a young practitioner. At the fourth or fifth meeting of this advisory panel, the dean said, “I’d like to speak with you after the meeting.”  I thought, “That’s it. I’m off this advisory panel.” His comment was, “I like the fact that you speak up, I like that you’re honest about what you think. I’d like to offer you a position.” I was shocked initially but intrigued by the opportunity to help support my young colleagues. I initially took a part-time role, which evolved into a full-time role, which evolved into the deputy dean of the institution.

I play drums, it’s a passion. I’ve played since I was a kid. I’m in the Hall of Fame of the [Miami Beach Senior High] Rock Ensemble. Candidly, I thought I wasn’t even going to go to college-I thought that music was my career. My father convinced me I could always have a musical career, but it would probably be good to have a profession. I play my drums every day.

What part of academia did you like the most?

What really turns me on and what I’m most proud of is just seeing students learn. To see those bulbs go on and to see them actually grasping concepts and being able to have some influence of the future of the profession is what really got me going. The first day I stood in front of a class, I knew that first moment it was something I wanted to do. Students have no preconceived notions. They come up with amazingly great thoughts and aren’t inhibited by the historical things that have gone on. That for me is incredibly inspiring.

What was the transition from private practice to industry like?

Really difficult. [Laughs] I didn’t at all anticipate the challenges I would face at being a clinician in industry. It really comes down to you’re a clinician, you make a decision, there’s a result, it’s either good or bad, and you adjust and adapt. In industry, at least initially, I didn’t know if what I was doing was making a difference. That was really tough as a real clinician. I was groomed to be a clinician and then all of sudden working in a big corporation took an awful lot of adaptation. Transitioning from independent practice to academia to industry did help a little bit. One day when I retire from industry, I’d love to get back into academia. The politics of that prepared me a little bit for the experiences in industry. It is a tough route. I’ve told people it probably takes five years to be comfortable as a clinician in industry.

How did you transition from contact lenses to spectacle lenses?

I transitioned from the number one contact lens company in the industry to the number one spectacle company in the industry. I tell people that I moved 12 mm away. What really struck me was the innovation. A lot of people think about innovation in contact lenses. With spectacles, there’s not a perception-or at least there hadn’t been a big perception-about the true transformational innovation that was taking place. I came in at a really exciting time in Essilor where we just at the cusp of innovation dramatically changing how we look at spectacles not just for vision but as a health device. In pharmaceuticals, we would never consider using a product if there wasn’t great science and data. Contact lenses, very similar. Spectacle lenses, we’ve historically said, “It’s a spectacle lens. Is there a need for a lot of science?” One of my missions over the past seven years has been to push hard for the science and data because we’re making claims today with spectacle lenses that go far beyond anything we’ve ever done before.

How do you see optometry’s future in regard to practice-sold products vs. the Internet and 3D printing?

We’re a very traditional profession. We’ve been using some of the same technology and approaches for a hundred years. Sitting where I do, I see 10-15 years out of the pipeline of products, and I try to encourage my colleagues to be open to innovation. We don’t want things to change; we want them to stay as they are. But things like ecommerce, 3D printing, virtual reality, and artificial intelligence are dramatically affecting our profession. We have to be open to it. We have to understand that our patients are going to demand these things. I’m proud of our company. We look forward; we do things that are often viewed as controversial because they’re new. I’ll give you an example: virtual reality. Today we sit behind a device that was created 75-100 years ago. It has lenses in it, we flip lenses, we show a patient a chart. Imagine a world where we can evaluate you in a virtual environment. I can immerse you in a virtual world where you’re at a computer, you’re on a tennis court, and you’re behind the wheel of a car, and now I assess your visual performance in those environments and come up with the right solutions for you. In the not-too-distant future, we will see that sort of innovation come to the exam room.

What else do you see coming?

Today you think of eyewear to give you clarity of vision. That will be taken to its extreme. The human visual system can achieve far better than 20/20 vision-that was established in the mid 1800s as the standard for normal vision. Clearly, the demands on the human visual system have evolved since the mid 1800s. Just think about the devices that we use today. In Snellen acuity, the human visual system can achieve 20/8. I would suggest the eye exam is too easy, and we will get better and better at providing solutions that optimize vision, not normalize vision. It’s up to the industry to continue to provide the tools to do that.

Wow, that sounds like I’m old. [Laughs]  You know what? Not really. I’ve been really fortunate. I’ve had the chance to be in private practice with my father. I’ve had chance to be in academia and engage with the future of our profession. In industry, I’ve had a chance to represent my profession at Essilor at the very highest level of the company in order to make sure that voice is heard. That decision wanting to play drums for my career, I don’t regret that. Very few regrets if any.  I would say no.

Where do you see yourself fitting in driving the profession forward?

I’m in a unique position sitting on the executive committee of Essilor of America, the largest spectacle lens company in the world. This gives me an opportunity to influence the future. I take that very seriously. I cannot be effective at what I do sitting here in Dallas every day at my desk. I get out and talk to my colleagues. I need to hear what’s affecting them. This company lets me try new things and delve into new areas that may not always be viewed by my colleagues as supportive of them. I can tell you that we’re all about supporting the independents. I sit in a position to influence how this company makes decisions for the future. I take that seriously-with the input of as many colleagues as I can get, I try to make the best decisions I can.

What’s the craziest thing you ever did?

I hiked the Grand Tetons in Jackson Hole, WY. You start at the bottom, it’s nice and warm. You get to the top, and there’s ice and snow. Most of the people I hiked it with the first time decided not to make the peak where the snow was. I alone decided I was going to do it. It was probably a stupid thing to do, but I did it, I achieved it. My toes still pay the price for that endeavor but it was an amazing challenge that I decided to tackle. I’m glad I did it.