My grandfather was one of the first instructors in the 100-year old College of Optometry at The Ohio State University. I never knew him; he died when I was 2. He had an optometry practice in my home town. My father was an optician-he made spectacles and managed a lab. So I knew the optometric field as early as I can remember.

Why did you choose optometry?

My grandfather was one of the first instructors in the 100-year old College of Optometry at The Ohio State University. I never knew him; he died when I was two. He had an optometry practice in my home town. My father was an optician-he made spectacles and managed a lab. So I knew the optometric field as early as I can remember. I actually went to college to go into education and be a basketball coach like my older brothers, but a year after I started I decided I was going to take a different path.

How has the academia/corporate transition been different this time around?

The difference between when I came back from the industry to the university, between now and 30 years ago when I came back to Ohio State from Dow Corning, is I am more experienced and more interested in continuing to be involved in innovation. Even early-stage innovation that’s in a proof-of-concept stage. I love launching new products. When I came back I felt like I was out of the mainstream of optometry, and I needed to get back. It’s the whole process of taking something from concept to proof-of-concept to development and taking it out into the marketplace where people can really benefit from it.

What's the biggest lesson you learned in corporate life?

I think it’s the process of multifunctional collaboration. Working with the different groups, whether that’s chemistry, manufacturing, regulatory, clinical development, formulation, or marketing-and then the leadership of the endeavor-it’s a multidisciplinary, multifunctional process. If you don’t have that in place, it’s not going to work, no matter how great an idea you have. Saying that is mundane, but I’m a big believer in it, especially with the way I saw that happen with turning around Bausch + Lomb from where it was seven or eight years ago to where it is now as a part of Valeant Pharmaceuticals.

Why did you leave Bausch + Lomb, then go back into academia?

I still lived in Dublin, OH, with my wife, who just retired from pharmacy a year ago, and our two daughters and four grandchildren live within seven miles of us. I had a condo in Rochester, so about 40 weeks out of the year, I drove back and forth every week to Rochester. I could have stayed at Valeant, but I needed to go home. It was the right time and the right place to do that. If you drive from Dublin to Rochester, it takes six hours with traffic without a blizzard.

What are you doing now at OSU?

I can say it in one word: innovation. I do not have any teaching or administrative responsibilities. My job is to develop collaborations with industry, inventors, and with faculty here or elsewhere, to help people innovate. That to me is everything from somebody who’s got something in the marketplace or is about to launch a product, somebody who’s developing a product and needs clinical trials, an inventor who has an idea or device or pharmaceutical that he wants to go through the regulatory process. One of my beliefs is that everyone I know in the field, or comes to me, or I seek out is a collaborator until proven otherwise. I have a very open mind about what I would like to do across the spectrum of eye health. Of course, everybody looks at me and says “Oh, so that’s contact lenses.” To me, it’s a lot more than contact lenses.

What made you turn contact lenses into a lifelong passion?

[Laughs] I can’t talk about my career without talking about my mentors. I’ve had some of the most incredible mentors ever: Neal Bailey, Gerald Lowther, John Schoessler, Richard Hill. Early in my life, I ran into a guy by the name of Brien Holden, he was very inspirational. He was here on sabbatical and I was a graduate student. When I was in optometry school, optometry was still a drugless profession, and the only thing we did really that affected the physiology was apply contact lenses. Jerry Lowther invited me to work in his lab when I was a student, and I just got hooked. I became a complete lab rat in his lab and the contact lens clinic. Ohio State is one of the meccas for contact lens research because of all those people I mentioned. The who’s who of the contact lens field would come through from all over the world three times a year. It was an environment where I just totally got hooked on it.

What should we look for in upcoming contact lens developments?

I would tell you, but then I’d have to kill you. [Laughs] I think that this whole idea of contact lens being used beyond the scope of correcting vision to diagnose eye disease or to obtain information from the cloud is fascinating. They’re wonderful concepts, but there’s a lot of work between those concepts and making them safe, effective, and successful in the marketplace. It’s very difficult, companies have developed some amazing products, they’re not even on the market. The cost of entry is high. The market’s not growing double-digit like some of the large companies need. I do think there’s great potential, and yet I’m very interested in making sure that it works right, works well, and it’s got to be economically feasible for patient, doctor, corporation.

What advice do you have for new grads?

There’s so much opportunity for young eye doctors. There’s so much need for eye care, whether that’s for a diabetic patient, a glaucoma patient, so much uncorrected refractive error in the world, so many opportunities to serve people. Obviously the challenge is getting paid for it because students are in a lot of debt, and yet they’re going into a field that is so rewarding. It’s great way to make a living, but it’s such a rewarding way to help people have a better life.

I don’t know if it’s crazy. One of things I’m most touched by is the work we did for the last five with Bausch + Lomb supporting an initiative with Lions Club International Foundation to support the Pediatric Cataract Initiative. It was a $500,000 investment in helping people, in developing countries mostly, build capacity and do research in pediatric cataract, infant cataract, and care and treatment of the cataract patient. I didn’t realize at the time it started what a big deal was. So, I look back and I’m kind of like, “That was kind of a crazy idea,” but we pulled it off with a lot of collaboration.

What legacy do you want to leave behind?

I always think it’s more important to someone else. I guess the people I’ve taught, mentored, encountered in the field, collaborated with, I hope the things we’ve done together really have meaning for people who need what we’ve done. Whether that’s for a patient with keratoconus or a young myope like myself who got his first contact lenses. I want those people who I’ve worked with to really feel good about what they do. Not just because they have a great livelihood from what we’ve learned together but they really appreciate what it does for their fellow man. 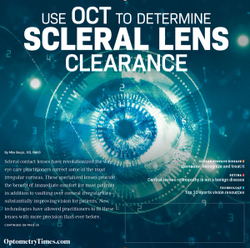