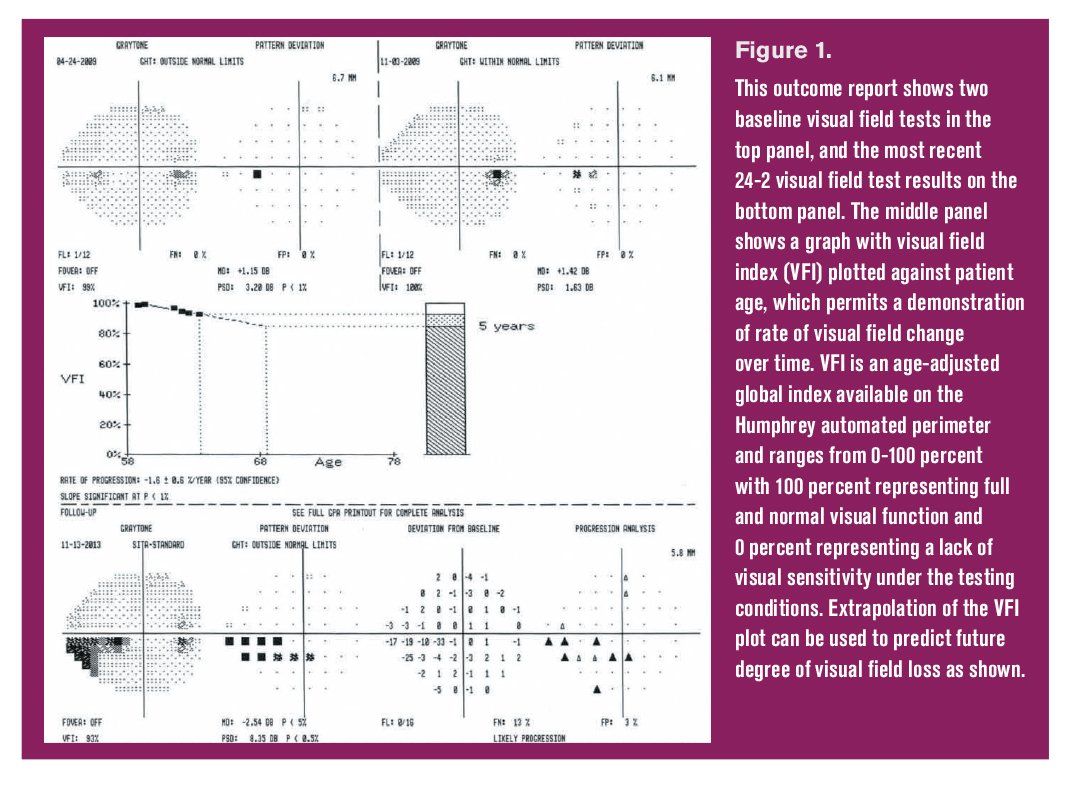 Glaucoma progression analysis (GPA) summary for 24-2 achromatic threshold perimetry. Figure 1. This outcome report shows two baseline visual field tests in the top panel, and the most recent 24-2 visual field test results on the bottom panel. The middle panel shows a graph with visual field index (VFI) plotted against patient age, which permits a demonstration of rate of visual field change over time. VFI is an age-adjusted global index available on the Humphrey automated perimeter and ranges from 0-100 percent with 100 percent representing full and normal visual function and 0 percent representing a lack of visual sensitivity under the testing conditions. Extrapolation of the VFI plot can be used to predict future degree of visual field loss as shown.

Adding vision-related quality-of-life scores to glaucoma staging can provide valuable information to help ODs better manage their glaucoma patients. Two ODs share their research, including a clinical example, about how such scores can help.

The primary goals of glaucoma management include preservation of visual function and quality of life. To achieve these goals, accurate staging of each patient’s glaucoma is important so that treatment intensity can be appropriately titrated.

Considering these basic tenets, it is surprising that standard glaucoma staging systems have not incorporated vision-related quality of life (Vr-QOL) information into their models.

Looking at Vr-QOL
Past studies have recognized that Vr-QOL is well correlated with presence and severity of glaucoma.

The Los Angeles Latino Eye Study also reported that among its subjects with primary open-angle glaucoma, those with severe field loss had lower Vr-QOL scores versus those with no or initial field loss.3

Although the questionnaires used in each of these studies differed, the evidence agrees that those with advanced stages of glaucoma have a lower Vr-QOL compared to those without glaucoma and those with earlier stages of the disease.1-6

Thus, it should be plausible to create a glaucoma staging system that that incorporates Vr-QOL information.

Vr-QOL limitations
Vr-QOL scores, however, cannot be used in isolation to stage glaucoma because this type of data has several major limitations.

First, administering a Vr-QOL survey is cumbersome within a clinical setting where chair time is limited.

Additionally, Vr-QOL questionnaires are inherently variable because responses are subjective, and non-visual factors can significantly confound the results.

However, if Vr-QOL data could be accurately linked with information characterizing disease severity, it might be possible to develop an integrated glaucoma staging system in which visual function metrics could serve as adequate surrogates that reflect Vr-QOL. It was with this goal in mind that we recently conducted a clinical research study in our facility.

Approach and results
From participants in an ongoing research study at our institution, we identified 103 primary open-angle glaucoma subjects who had glaucomatous optic neuropathy with corresponding, repeatable visual field (VF) loss on 24-2 standard automated perimetry (SAP) in at least one eye.

Presence of VF loss was defined by standard cluster criteria and had to be reproducible on at least three VF tests. Each eye’s 24-2 visual field loss was classified/staged using comprehensive Hodapp-Parrish-Anderson criteria.

Vr-QOL was measured using the NEI-VFQ-25 quality-of-life questionnaire, and all subjects completed SAP within six months of completing that survey.

Because NEI-VFQ surveys are subject-based while VF classifications are conducted for each eye separately, we explored several different approaches for constructing a subject-based visual field loss staging system.

Ultimately, the method that best aligned with the Vr-QOL score involved a combined VF score derived from simple addition of each eye’s VF category (0=none, 1=mild, 2=moderate, and 3=advanced VF loss).

Because the clinical use of comprehensive Hodapp-Parrish-Anderson criteria is impractical for individual patients, we then investigated whether specific visual field parameters could serve as surrogates for Vr-QOL based stages within our system.

We found that while average binocular values for 24-2 mean deviation (MD), pattern standard deviation (PSD), and visual field index (VFI) each demonstrated significant differences among stages, the average 24-2 VFI value for both eyes was the only parameter that was not only significantly different between each stage but also showed no overlap of Vr-QOL interquartile ranges between stages.

These results suggest that mean VFI score may have value as an effective and efficient surrogate to define glaucoma stages that are directly linked to Vr-QOL.

Discussion
While current management of glaucoma includes consideration of disease severity, the reduction of Vr-QOL related to any specific degree of vision loss can only be presumed.

Accordingly, if a staging system could be constructed that more directly linked different stages of disease to specific levels of Vr-QOL, this approach would be expected to permit clinicians to make more informed decisions about preserving Vr-QOL when making glaucoma management decisions.

For practical clinical implementation, this system also must be uncomplicated and intuitive and exhibit well-delineated disease stages.

The staging system developed in our study meets many of these criteria, including well-defined disease stages, use of a parameter from an established parametric test used in glaucoma assessment (VFI), and the relative ease of use of this system in a clinical setting.

Related: Rethinking what we know about glaucoma in 2019

Thus, the average VFI today is 96 percent for the two eyes, which places this patient in the mild category of glaucoma severity and would correlate with a high-level Vr-QOL in this patient.

However, when considering the rate of VFI loss that is occurring over time in this patient, the patient’s average VFI two years from now would be expected to be 94 percent, which would correlate to a moderate stage of glaucoma with an associated reduction in Vr-QOL.

Accordingly, the rate of 1 percent VFI loss per year in each eye would be expected to result in a reduced quality of life for this patient in only two years if the rate of change were allowed to continue unchecked.

Alternatively, if this patient’s rate of change was only 0.1 percent in each eye per year, the patient would not reach the next disease stage for 20 years. By appreciating and understanding these relationships, the clinician can intervene in a more timely manner to directly preserve Vr-QOL.

Conclusion
In summary, there are clear advantages to integrating Vr-QOL information into glaucoma staging systems, though additional work is needed to improve and refine this approach. Particularly, we need to better understand exactly how glaucomatous vision loss impairs activities of daily living.

When this information can be more systematically incorporated into our clinical decision-making processes, ODs will we be able to better achieve our primary goals in glaucoma management-preserving both visual function and quality of life for each of our patients.