Everything from our high-tech lifestyles outdoor environmental factors, and the general aging of the population can lead to blepharitis, dry eye disease (DED) and meibomian gland dysfunction (MGD). Sustained tasks, such as reading, can reduce the blink rate to as low as five blinks per minute. This slow blink rate can cause additional stress on an ocular surface that is already compromised due to one of the aforementioned disorders.

Everything from our high-tech lifestyles1 outdoor environmental factors, and the general aging of the population can lead to blepharitis, dry eye disease (DED) and meibomian gland dysfunction (MGD). Sustained tasks, such as reading, can reduce the blink rate to as low as five blinks per minute.2 This slow blink rate can cause additional stress on an ocular surface that is already compromised due to one of the aforementioned disorders.

It is not surprising that the limited prevalence data currently available suggest ocular disorders, such as dry eye, are increasing in prevalence.3 Patients experience discomfort as well as reductions in both productivity and overall quality of life. Blepharitis, for example, tends to be a chronic condition, and no one treatment has proven curative thus far.4 Some of the treatments used for these ocular diseases have included: lid scrubs, mild shampoos, warm compresses, and antibiotic ointments. The FDA recently approved novel Rx eyelid cleanser i-Lid (NovaBay Pharmaceuticals, Inc.), which is designed to enhance lid hygiene and help to alleviate these conditions.

DED is typically the result of insufficiency of tear quality or volume, which leads to inadequate lubrication of the ocular surface.5 A variety of signs and symptoms are associated with DED, including: grittiness, burning, irritation, foreign body sensation, redness, fluctuating vision, and increased blink rate.6,7 The link between the signs and symptoms of DED has proven inconclusive to date.8

MGD is one of the leading causes of DED throughout the world.9The Tear Film and Ocular Surface Society (TFOS) described MGD as “a chronic, diffuse abnormality of the meibomian glands, commonly characterized by terminal duct obstruction and/or qualitative/quantitative changes in the glandular secretion.”9

Blepharitis is one of the most common eye disorders,10,11 but the condition often goes undiagnosed due to the fact that it can sometimes be perceived by the patient as being a nuisance rather than a legitimate medical concern. Blepharitis is an inflammatory disease of the lid margin with a multifactorial etiology.10This condition encompasses pathologic conditions of the pilosebaceous unit of the anterior lid or the meibomian gland of the posterior lid.12 The anterior form is usually caused by bacterial overgrowth and/or sebaceous gland activity, while the posterior form is caused by MGD, the most common causative factor for evaporative dry eye. Blepharitis is typically diagnosed using several hallmark signs and symptoms including:12

• Crusting or flaking of the lids on awakening

Currently, there is a paucity of prevalence data regarding blepharitis.10,11 This is due, in part, to the fact that the disease often exists as a comorbid condition with DED, seborrheic dermatitis, atopy, acne rosacea, etc.,12 which makes a differential diagnosis more challenging. To address this knowledge gap and increase our understanding of blepharitis, Lemp and Nichols conducted a survey of 5,000 individuals in the U.S. and found that 79.3 percent had experienced at least one symptom related to blepharitis during the previous 12 months.12 Furthermore, 32 percent of respondents experienced at least one symptom half of the time.

Lemp and Nichols also surveyed 120 ophthalmologists and 84 optometrists to evaluate the frequency of ocular surface symptoms associated with blepharitis.12 About 47 percent of optometry patients and 37 percent of ophthalmology patients were suffering from these symptoms. Most ODs (97 percent) agreed or strongly agreed that DED is a common comorbidity with blepharitis/MGD. Most (94 percent) of ODs agreed or strongly agreed that posterior blepharitis/MGD is the most common cause of DED. This is important because MGD is a major component of DED and contact lens intolerance. Optometrists rated their most important treatment goals for anterior blepharitis: 12

According to the optometrists surveyed, the most important product attributes for the management of blepharitis and MGD were: safety beyond short-term exposure, tolerability, dosing regimen, and antibacterial properties. The two most important factors for blepharitis patients to seek treatment were blepharitis symptoms (34 percent) and dry eye symptoms (41 percent).

Clinicians should be aware of the effect of blepharitis, dry eye, and other disorders on contact lens patient dropout rates. Mean rates in the U.S. have been estimated at about 16 percent.13 A survey by Rumpakis found the number one reason for dropouts in the U.S. appeared to be discomfort (50 percent of respondents). Furthermore, dropouts can constitute a substantial loss of practice revenue.

Treatment paradigms for blepharitis appear to be changing.12 Although, lid hygiene is still important, the recent trend is moving away from traditional antibiotic ointments and toward Rx products.

The i-Lid Cleanser product was developed to enhance lid hygiene. The cleanser is formulated with 0.01 percent hypochlorous acid,14 a naturally occurring compound15 that provides an oxidative burst produced by neutrophils and monocytes. Hypochlorous acid in solution is a fast-acting/broad spectrum15-17 antimicrobial agent, with >99.99 percent kill for numerous pathogens including:

This rapid bacterial kill results in reduced levels of bacterial toxins, which would otherwise stimulate the inflammatory cascade. Biofilms are know to delay wound healing.18 Hypochlorous acid disrupts biofilms in solution.19 This agent also reduces bacterial loads in animal model studies20 and is associated with a low toxicity profile in solution.16 Hypochlorous acid has been used successfully in other medical applications such as nasal irrigation17 and wound therapy.14,16,20

Christine Sindt, OD, FAAO, associate professor of clinical ophthalmology at the University of Iowa Hospitals and Clinics, manages patients with blepharitis. She has been using the hypochlorous acid cleanser with her patients for several months and seen positive results.

“We are constantly looking for better treatments for their eyelid disease,” she said. “We shouldn’t just be thinking of blepharitis as a benign condition. It can actually be viewed as very devastating, both visually and in terms of comfort for the patient.”

She also points out that it is important to reduce the bacterial bioload on the eyelid. She said this refers back to Loretta Szczotka-Flynn’s work21 which shows people who have had marginal infiltrative events have higher lid flora than those who haven’t. Dr. Sindt believes that the hypochlorous acid cleanser should be given to every contact lens wearer who has had a contact lens peripheral ulcer. She also feels the product has a benefit for any patient who has rosacea.

“All of my patients have come back and said that they have found this to be very effective in making their eyes more comfortable and increasing their contact lens wear time,” said Dr. Sindt. Others have even resumed contact lens wear. She also pointed out that her patients are experiencing reductions in both itching and dry eye symptoms.

Art Epstein, OD, FAAO, who practices in Phoenix, has had success with i-Lid cleanser and now keeps the product in stock so that his patients have immediate access to it. Previously, his patients were using baby shampoos that were stripping a lot of the oils from the skin, which was a significant concern with MGD and blepharitis. “In some cases of lid disease,” he said, “the Staph bacteria produce lipases, which lead to saponification, and you end up with only ‘soaps’ on the lids, which is why patients have burning eyes.”

Dr. Epstein said the hypochlorous acid cleanser works effectively without the detergent action and also counteracts some of the toxins that are produced by bacteria. Therefore, his patients get a lot of relief using the product.

He noted that treatments for eyelid disease have not changed for a number of years and that the hypochlorous acid cleanser is really an ideal solution for a very prevalent problem. The development of bacterial resistance with the cleanser is not a concern. His patients appreciate the i-Lid cleanser’s results, not only in terms of the efficacy and gentleness of the product, but also in their overall cosmetic appearance.

Use in therapeutic regimens

The 0.01 percent hypochlorous acid eyelid cleanser has a useful place in the therapeutic armamentarium for any instance where enhanced lid hygiene is needed:

• Blepharitis for better management of signs and symptoms

How to create a dry eye center

Recolonization of bacteria can be a chronic problem. For example, women routinely reuse eye makeup and inoculate themselves with bacteria during each application. Rubbing the eyes with the fingers can also be a source of bacterial and allergen contamination.

The cleanser can be used in place of baby shampoo and other commercially available lid scrubs. Data to be presented this fall demonstrates that the cleanser produces a faster bacterial kill than other agents that are currently available. The product can be used in conjunction with other products. It provides a complimentary mechanism of action to add to the treatment of Demodex sp. It helps to prevent secondary bacterial colonization and reduce the inflammatory response caused by exotoxins from the mites.

Dr. Epstein recommends the cleanser for lid hygiene as a stand-alone agent. He also has his patients use it in conjunction with other agents, such as antibiotics, for more severe cases of MGD and blepharitis. In some cases, the patients were able to discontinue their antibiotic therapy after using the cleanser. He also recommends i-Lid cleanser for his patients who have undergone LipiFlow therapy.

Dr. Sindt often recommends a natural oil product, such as coconut oil, to soften the tissue around the eye and help with cleaning the flaking debris. She then has her patients use i-Lid Cleanser to remove the bacterial bioburden effectively on the eyelid surface.

The cleanser formulation does not contain other buffers, preservatives, or surfactants and is therefore gentle enough for everyday use. This contributes to one of the side-benefits of the product that patients feel more comfortable in their contact lenses or are often even able to resume wearing their lenses. 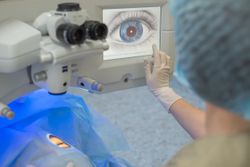 How to address dry eye in the challenging cornea