Viral corneal infections, while not overwhelmingly common, can be puzzling and even sight-threatening.

Viral corneal infections, while not overwhelmingly common, can be puzzling and even sight-threatening. This member of the Herpesviridae family, herpes simplex virus (HSV-1) or human herpes virus 1 (HHV-1) remains the leading cause of herpetic ocular incidents, causing nearly 95 percent of total infections.1

The sequelae of ocular manifestations potentially include long-term deep vascularization, significant corneal scarring, and disqualification from contact lens use.

Though such a high number of adults have been exposed, a very low percentage of individuals develop clinically recognized ocular disease. The prevalence has been estimated at 5 to 20 cases per 10,000 individuals per year.2 These rare occurrences are overwhelmingly a unilateral disease; bilateral cases tend to be more severe and usually occur in younger adults.

Primary HSV infection via contact with infected fluids may incubate for up to a month and will usually present as some variation of oropharyngitis. After this initial infection, the virus enters a latency stage, which may last from months to years, in the trigeminal ganglion.

This location of latency allows the virus to activate anywhere along the trigeminal nerve, including the ophthalmic division. Such a reactivation of the disease, typically the first ophthalmic presentation, is termed the primary ocular infection.

The inciting factor is usually some insult to the patient’s immune system (stress, injury, illness) and may be as simple as wearing contact lenses, spending a day in direct sunlight, enduring an afternoon of chilling wind, or feeling the stress of finding a new job. 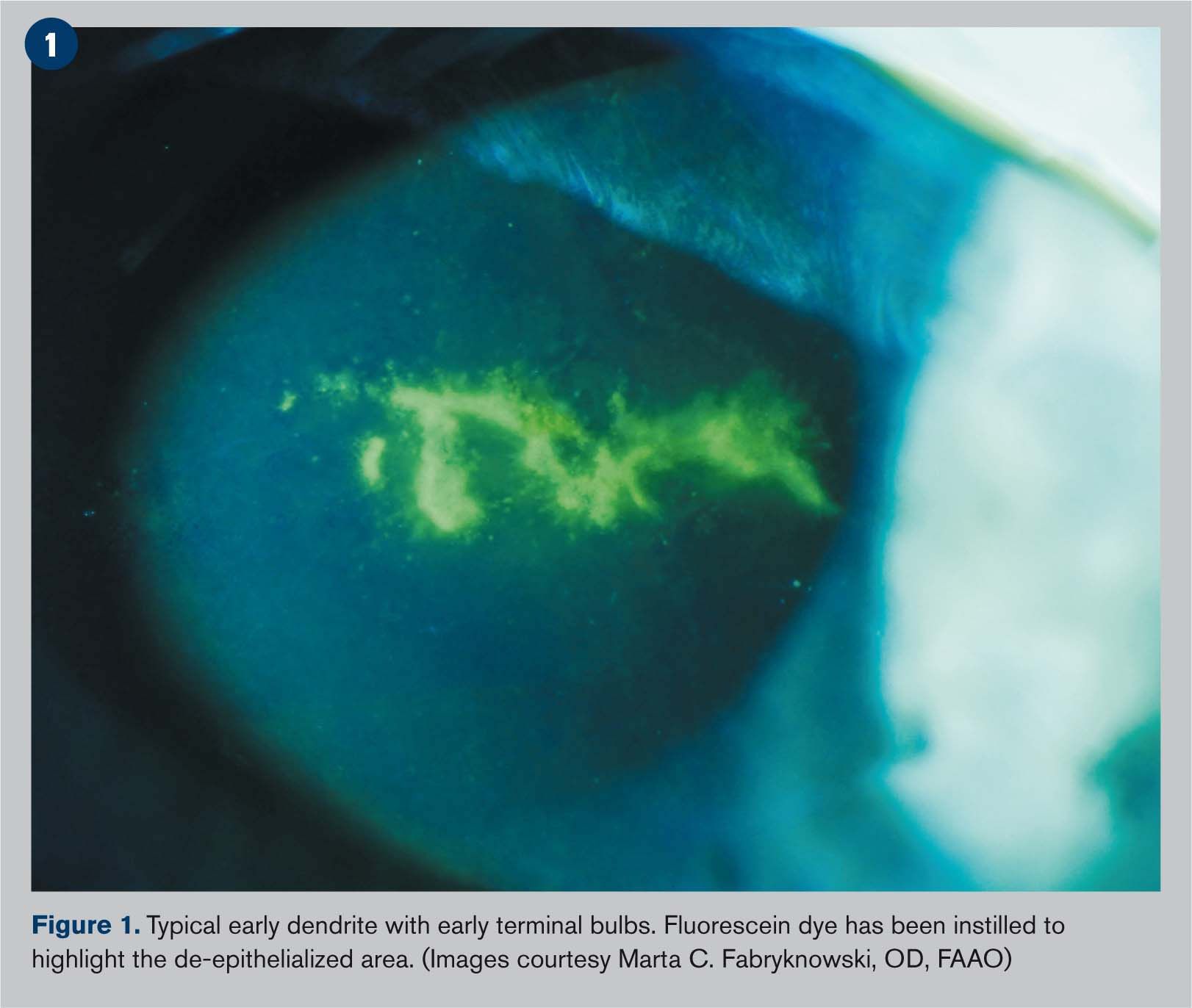 Next: Not so simple diagnosis

Not so simple diagnosis 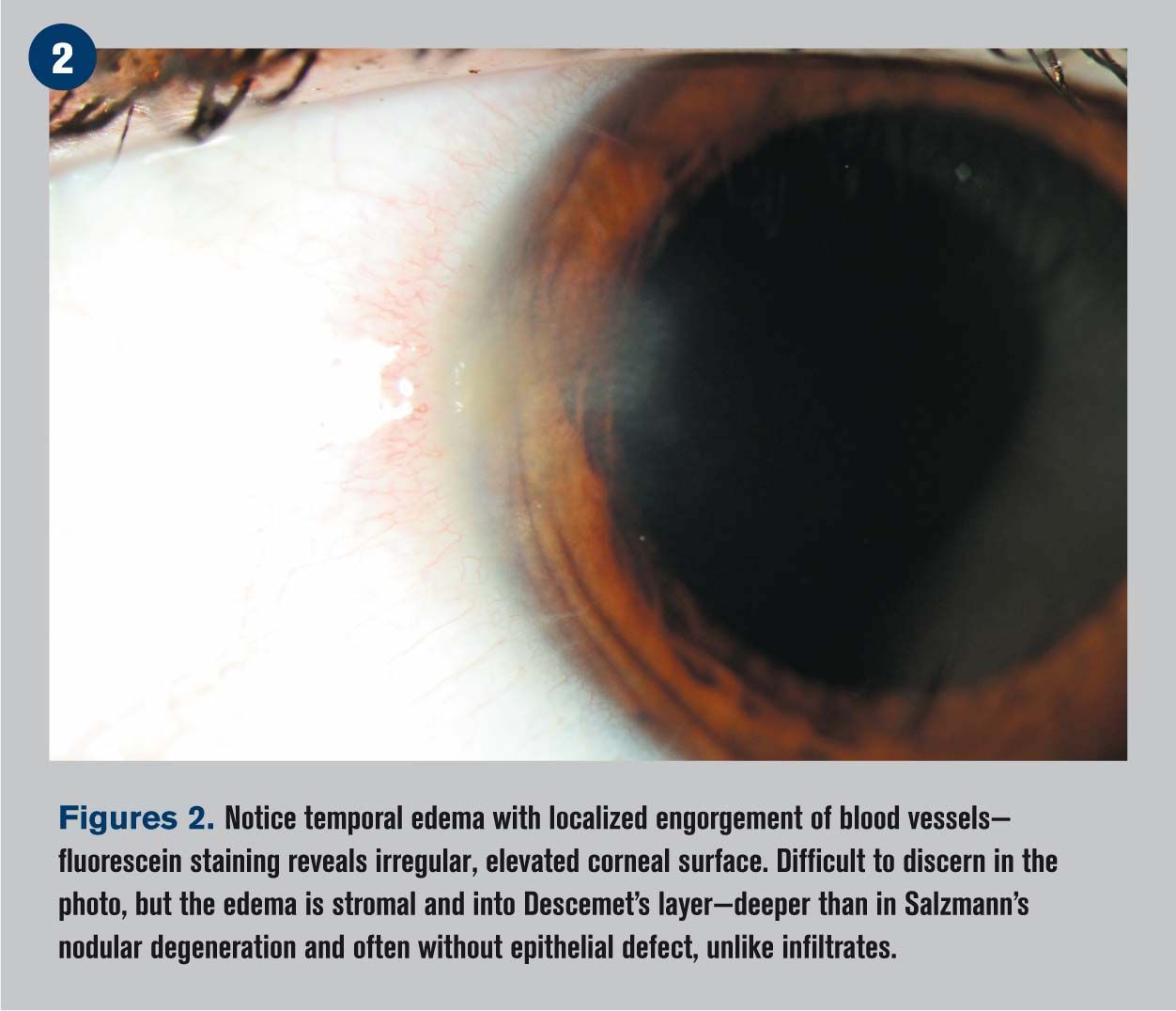 Identifying ocular HSV-1 is not a simple matter. Its presentations can be wide and varied and can cumulate in a complicated mess.

Though these may be helpful and could be performed in a hospital or laboratory setting, we must diagnose in our practices based on history and clinical appearance. It is important to question the patient about previous outbreaks. Has he ever gotten a cold sore?

Is he concurrently feeling under the weather? Has he had a similar occurrence? Again, stress-related questions are an important player. Otherwise, our diagnostic capabilities are relegated to clinical examination of the eye.

Let’s review clinical manifestations from the epithelium into the anterior chamber.

Related: The diagnoses you shouldn't be missing

In the superficial epithelial form, keratitis leading to the formation of a classic dendrite is the most well-known presentation (see Figure 1). The epithelium may first present with irregular, granular aggregations of superficial punctate keratitis.

At this stage, a practitioner’s differential diagnosis could still be dry eye due to varying causes. A classic dendrite may not have yet formed; it may take days for a full, branching, defect to manifest. This is the toughest stage at which to diagnose-irregular borders and aggregation of the punctate staining is key. 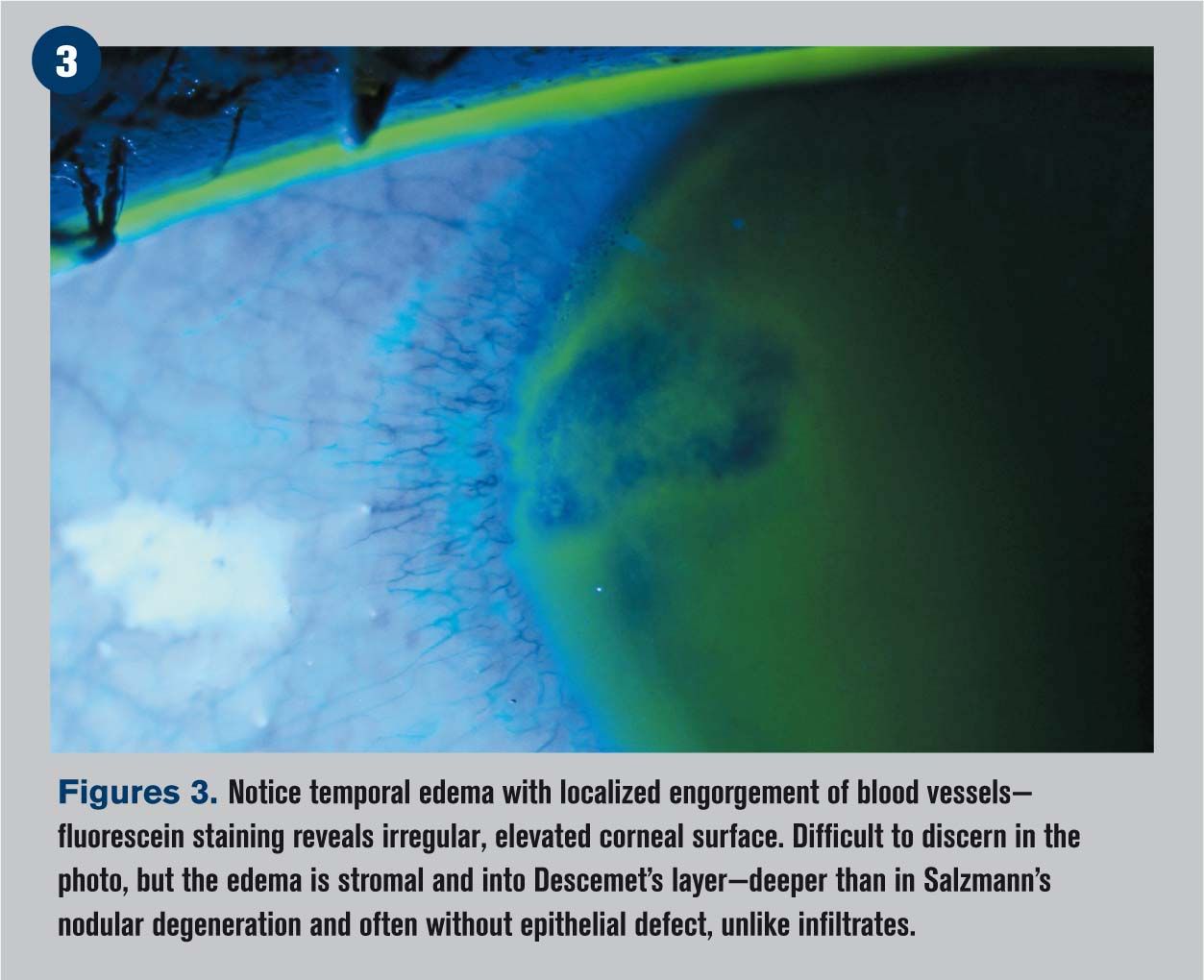 After the early keratitis and formation of a single dendrite, it is possible that we will see the merging of multiple branches, creating a large, multi-dendrite lesion. The epithelium may then slough off, creating a large corneal epithelial defect.

This is sometimes termed a geographic or metaherpetic ulcer. Its unique feature, unlike bacterial ulcers or abrasions of other etiology, is its margins. Unlike other ulcers, HSV-1 ulcers often retain their dendritic margins and characteristic heaped staining with fluorescein, lissamine green, or rose bengal.

Moving deeper into the cornea is stromal keratitis, also known as interstitial keratitis. Like a dendrite, this ocular manifestation can be located anywhere on the cornea-central, mid-periphery, and even marginally (see Figures 2 and 3).

Herpetic stromal edema, or interstitial keratitis, is usually coupled with endothelial lines and often keratic precipitates attached to the endothelium posterior to the edema.

The endothelial keratic precipitates often mean there is some level of anterior chamber cells and flare, a unique feature of herpetic stromal keratitis. Viral anterior uveitis is rare, but upon occurrence is usually unilateral, associated with corneal involvement and often associated with acute ocular hypertension.4

Postviral remnants of herpetic corneal disease include a multitude of signs. Irregularly shaped deep corneal scars, with or without deep neovascularization, are most common. Patient history of multiple episodes of “infections,” especially unilaterally, are good clues that there may have been a viral etiology.

Topical treatment of herpetic keratitis involves quite a large arsenal of possibilities. First, and perhaps most importantly, are the antivirals. Viroptic (trifluridine, GlaxoSmithKline) has been the mainstay for topical HSV-related keratitis. It is dosed one drop every two hours while awake until reeepithelialization, not to exceed nine drops per day, and then one drop every four hours for another week, not to exceed five drops per day.

Its side effects include increased redness, punctate epitheliopathy, and staining, despite improvement of the dendrite, suggesting some level of drug toxicity. It is recommended that its treatment span does not exceed more than 21 days. The ointment Vira-A (vidarabine, Monarch Pharmaceuticals) was often used in conjunction with Viroptic, but is no longer available for use. Zirgan gel (ganciclovir, Bausch + Lomb), the topical antiviral newcomer, was approved by the FDA in September 2009.

Its dosage is one drop five times per day until resolution of the keratitis, then three times per day for one more week. The upside of ganciclovir gel is its efficiency and markedly lessened corneal epithelial toxicity as compared to trifluridine. The downside is the sometimes prohibitively high cost to the patient.

Other ophthalmic topicals to bear in mind are the antibiotics. Epithelial corneal disease, whether herpetic or different etiology, essentially does create an open wound, ergo potential entrance for bacteria. It may be prudent to add a cautious few drops of topical antibiotic to existing antivirals as a protective mechanism.

Another adjunctive topical to keep in mind is the steroid family, though certainly used with caution in active epithelial disease. There is emerging thought that steroid use post closing of epithelium concurrently with antivirals may help to decrease scarring.5 This is especially useful if lesions verge near the visual axis. Aside from the danger of being used too soon, its use may become addictive, of sorts, and may require a lengthy taper post viral attack-again, uses should be with caution.

If an oral agent is possible, there are three antiviral treatment options for herpes simplex. In general, they have few contraindications and are safe to use in patients above the age of 2. They are pregnancy category B and are excreted in breast milk.

Side effects are fairly rare, generally localized to mild lethargy or gastrointestinal discomfort. They are metabolized by the kidneys, so caution with HIV-positive patients or those who have had a kidney transplant.6

It is important to note that for all oral dosage regimens, it is suggested that after the initial 10 days, there be some taper schedule. HSV keratitis is known to rebound or re-ignite, so minor dosage (500 mg per day of Valtrex, for example) is common for up to months after the initial incidence, longer for repeat occurrences.

Other potential oral treatments are the addition of doxycycline 100 mg daily and 1000 mg vitamin C-both used only in acute epithelial disease with the thinking that the anticollagenase activity of both will speed closing of the epithelium.

This latest approach is gaining some momentum, though a formal study has not yet been completed.7 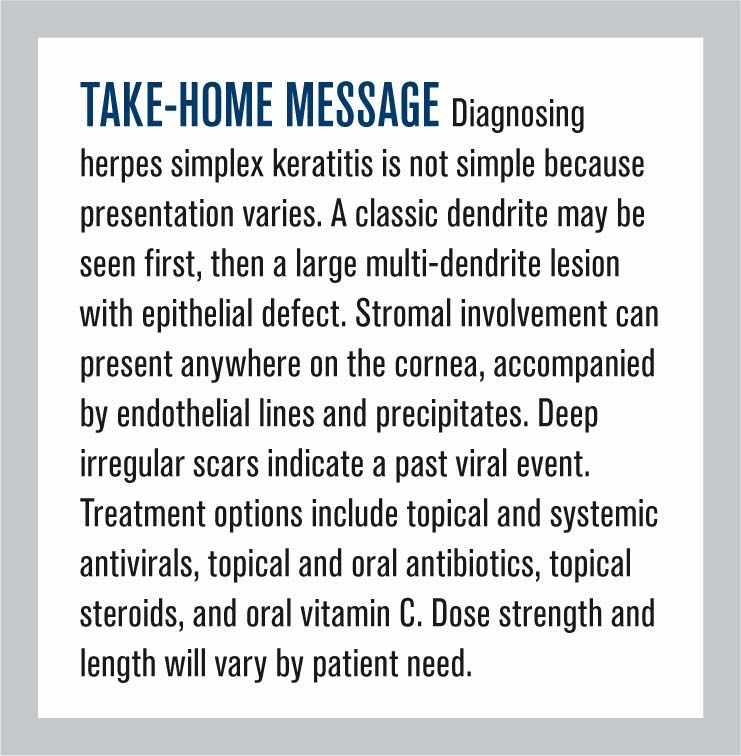 Oral treatment of ocular herpes simplex is fairly common practice, but when to combine with topical medication? Luckily, the landmark Herpetic Eye Disease Study (HEDS) has been giving us guidance for the last 20 years.1

HEDS also taught us that for patients with recurrent disease, maintenance dosing of antivirals, for example 400 mg acyclovir bid, is an effective outbreak suppressant.

Treatment strategies for HSV keratitis, both oral and topical, are about finding the right algorithm for each patient. Some may require a longer and higher dose of oral antivirals to best suppress an outbreak; others may require very small daily doses with the same success. Not only are we diagnosticians, but we must be keen pattern and trend observers.

Herpes simplex keratitis has a prolonged clinical course, which can be complicated and confounding. Its tendency to cause corneal scarring and potential vision loss requires close attention. HSV often responds well to both topical and oral treatments as long as the diagnosis is made in a timely manner.

As primary care practitioners, we are tasked to keep HSV on our radar when examining unilateral red eyes with nonspecific corneal presentations and potential history of inciting factors.