Congenital anomalies, angle closure, and juvenile open-angle glaucoma aside, it can be generally agreed upon that glaucoma tends to be a disease of relatively older persons. This rings especially true in the arena of normal-tension glaucoma in which intraocular pressure (IOP) may play less of a causative role compared to vascular and hemodynamic dysfunction.

Congenital anomalies, angle closure, and juvenile open-angle glaucoma aside, it can be generally agreed upon that glaucoma tends to be a disease of relatively older persons. This rings especially true in the arena of normal-tension glaucoma in which intraocular pressure (IOP) may play less of a causative role compared to vascular and hemodynamic dysfunction.

I subscribe to the notion that many cases of glaucoma are truly mixed-mechanism with several causes such as high IOP, low cerebrospinal fluid pressure, vascular compromise, and anatomic predisposition having varying degrees of causation. If there is any good fortune in all of the confusion surrounding such a multifactorial disease, it is that the number-one risk factor (ocular hypertension) also happens to be just about the only risk factor we can change in any significant fashion.

With this said, I recently came across an interesting publication concerning retinal vessel diameter and a purported correlation with glaucoma.1 The paper, recently published in Investigative Ophthalmology and Visual Science, was retrospectively observational in nature and included a sample size of 205 patients (63 with “high-tension” glaucoma, 82 with “low-tension” glaucoma, and 60 controls). The overall conclusion pointed to retinal vessel narrowing as a good indicator for the development of glaucoma over time.

While not a novel concept in the field of glaucoma diagnosis (and certainly not pathognomonic), retinal vasculature appearance has the potential to be another tool in the glaucoma workbench, if you will. It has long been said that the eyes are like water from the well in the presence of systemic diseases such as hypertension and diabetes. By this it is meant that chronic vascular changes seen in the retinal vasculature are likely going on elsewhere in the body, and the same case could be made for the microvasculature of the optic nerve with its sometimes marked variability not only between two persons, but perhaps also between the eyes of the same person. In short, vascular compromise in the retina is likely indicative of compromise elsewhere. The retina is just the only place in which we can see it with our own eyes.

Next: Case in point 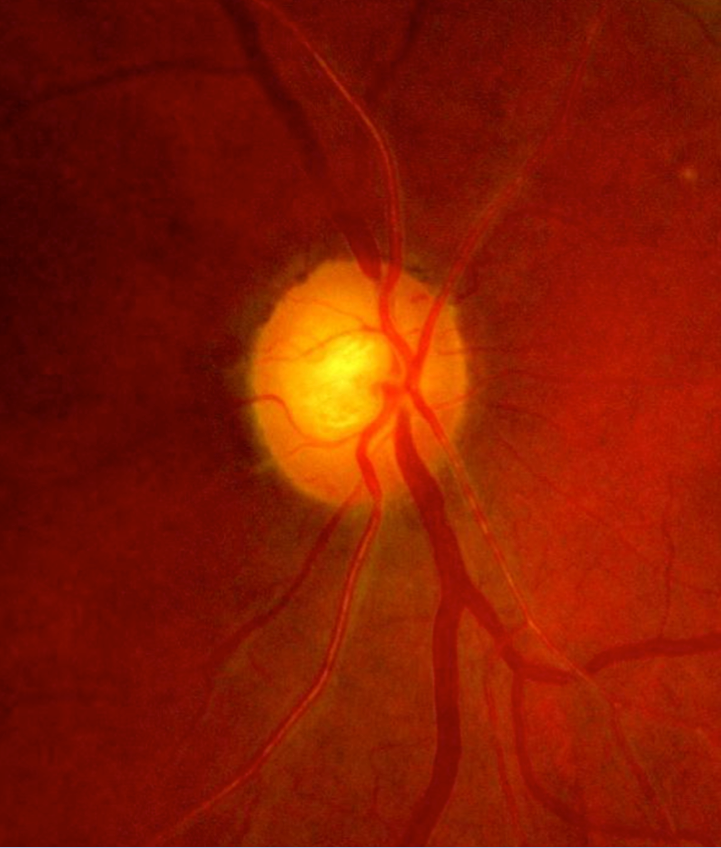 Keeping this concept in mind, a particularly memorable glaucoma patient (an African-American male in his early 60s) recently presented for a comprehensive eye examination and fundus photos. Several years ago, I had to really work to get him to understand that while his glaucoma was not causing any symptoms, it very likely would in the future if he was not compliant with his medications. He also has type 2 diabetes and hypertension, which are treated with metformin (Glumetza, Salix) and hydrochlorothiazide (Microzide, Allergan) respectively.

Figure 1 shows a fundus photo of his right optic nerve and surrounding retina from years ago that I used previously in an attempt to impress upon him the seriousness of his glaucoma (and diabetic retinopathy, for that matter). His highest recorded IOPs before treatment in the morning were 23 mm Hg in the right eye and 22 mm Hg in the left eye. When he is compliant-which is almost all of the time for the past few years-his IOPs are easily at target (14-16 mm Hg) in both eyes with prostaglandin monotherapy. I have not documented progression structurally or functionally as of yet.

Getting back to the photo of this patient’s right optic nerve and surrounding tissues: even in two dimensions, cupping is evident, especially along the inner superior border of the neuroretinal rim. Vessel baring is also evident inferiorly along with some areas of mild parapapillary atrophy superotemporally. However, taking a closer look at this patient’s retinal vasculature may lead one to think that high IOP may not be the only causative agent of his optic nerve compromise. The retinal arterioles are markedly attenuated, indicating some degree of relative ischemia to the tissues those arterioles supply. Conversely, the superior and inferior retinal veins are engorged in some areas, indicating the presence of relative venous stasis. This is all evident upon direct fundus examination and interpretation of the fundus photo.

Next: Why IOP may not be the only factor

Why IOP may not be the only factor

However, the take-home message is the notion that this degree of compromise very likely is not constrained to the portion of this patient’s cardiovascular system that we can directly image. It is likely happening elsewhere, to include the optic nerve’s vasa nervorum. This leads me to the unfortunate conclusion that high IOPs are probably not the only culprit responsible for this patient’s glaucoma. I’m confident that they are playing a large role  because lowering them seems to be halting progression. However, I’m also confident that there are other sides to this optic nerve’s compromise.

As health care in general becomes more personalized, glaucoma treatment will likely follow suit, as we get better and better at distinguishing patients in whom IOP matters more or less. Until then, we are left with lowering IOPs as our standard practice. This does not preclude, however, that other factors-such as vascular compromise-shouldn’t be taken into account on the diagnostic end of glaucoma. We have good science indicating such a relationship, and, more fundamentally, it just seems like good common sense.

Click here to check out the latest glaucoma news and advice