Will the SMILE procedure replace LASIK?

The femtosecond laser has brought many significant advances to eye surgery. For more than a decade, it has been used to create lamellar corneal flaps for laser in situ keratomileusis (LASIK), and more recently this laser is used to precisely perform several steps in cataract surgery.

The femtosecond laser has brought many significant advances to eye surgery. For more than a decade, it has been used to create lamellar corneal flaps for laser in situ keratomileusis (LASIK), and more recently this laser is used to precisely perform several steps in cataract surgery.

Additionally, it is used to create matching perforations and buttons in corneal transplant surgeries.

The ability of the laser to accurately create a separation in corneal tissue makes it a very versatile laser. We will describe a new application of the femtosecond laser in refractive surgery: a procedure called small-incision lenticule extraction for moderate to high myopia (SMILE).

Currently, LASIK is a two-step procedure in which a femtosecond laser creates a corneal flap and an excimer laser ablates tissue to change the curvature of the cornea, resulting in the desired refractive outcome.

SMILE is a one-laser, femtosecond-only procedure. The femtosecond laser creates a lenticule of tissue, which is removed via a “channel” in the cornea, eliminating the flap in the cornea.

This procedure is CME approved in Europe and is under FDA investigation in the United States and not yet approved.

When performing the SMILE procedure, the surgeon applies suction to the eye and “docks” the femtosecond laser. The laser photo-ablates a refractive lenticule with a diameter of 6.0 mm to 6.8 mm at a depth of 100 µm to 120 µm.

A single side-cut is made at the superior position, which has a width of 2.5 to 4.0 mm. Once the laser treatment is complete, the surgeon dissects the lenticule through the side-cut with forceps, removing the small piece of corneal tissue. Postoperative treatment includes the use of antibiotics and steroids similar to LASIK.

There are several theoretical advantages of this new procedure. Several of the known complications of LASIK are flap related, such as displaced flap, flap striae, and epithelial ingrowth.

While many of these complications are eliminated with a flapless procedure, some cases of epithelial ingrowth have been reported. The procedure is likely to sever fewer corneal nerves-possibly resulting in less dry eye-and the treatment removes less tissue per diopter, allowing for safely treating higher refractive errors and creating more corneal biomechanical stability.

Finally, only one laser is used completely to treat the patient; therefore, there may be less capital and per procedure costs to the surgeon and ultimately the patient.

Several published studies have shown refractive results approaching those of LASIK. Published studies show that between 77 percent and 100 percent of moderate myopes achieve within ±0.50 D of their attempted target refraction.1

In a prospective study, Lui compared the refractive outcomes of 113 SMILE patients to those of 84 matched LASIK patients with moderate myopia. There was not a statistical difference in the outcomes, except Lui found that the SMILE group had a lower amount of spherical aberration at six months vs. the LASIK cohort.

A five-year study conducted by Blum shows that SMILE is a stable, predictable procedure over that period of time. The overall efficacy of SMILE appears to be determined by the precision of the femtosecond to create a pristine lenticule.3

The comparison should be made to the most recent LASIK data from the Alcon FDA filing for the topography-guided procedure Contoura Vision. The FDA results found that nearly 69 percent of Contoura Vision patients achieved uncorrected vision of 20/16 or better.

The most common side effect of LASIK is dry eye, which is believed to be, in part, caused by the decreased corneal sensation from severed corneal nerves. Theoretically, the SMILE procedure severs less anterior stromal corneal nerves, resulting in less post-operative dry eye.

In a contralateral eye study, Demirok evaluated 28 patients for corneal sensitivity and dry parameters, including tear osmolarity, tear break-up time (TBUT), and Schimer’s at one week, one month, three months, and six months after LASIK and SMILE procedures.

Wang evaluated 93 patients in a contralateral eye study in which he measured dry eye parameters including TBUT along with the Salisbury Eye Evaluation Questionnaire (SEEQ), which is used to evaluate a patient’s dry eye symptoms.

SMILE does not appear to provide overwhelming benefits regarding dry eye, but certainly is not worse. With improved techniques, it may provide a decrease in dry eye signs and symptoms in refractive patients.

The SMILE procedure delivers energy to the cornea, and that energy can create diffuse lamellar keratitis (DLK). Zhao and colleagues enrolled 1,112 eyes to evaluate the incidence DLK with SMILE.

They reported an incidence of 1.6 percent, with all cases sporadic and significantly more with thinner and larger lenticules.7 This compares to an incidence of 0.20 percent in LASIK patients reported by Schallhorn in a study of 32,569 eyes.8

One paper proposes a more stable corneal structure with SMILE,9 but there are also reported cases of post SMILE ectasia.10 I believe we will still need to diligently evaluate the cornea structure in our selection of these patients.

Removing a second lenticule does not appear to be an option at this time.

There are surgeons who are using the femtosecond laser to dissect the “cap” of the SMILE procedure, use that a LASIK flap, and then treat as a LASIK procedure. There is the risk of a sliver of corneal tissue with this type of a procedure.

Therefore, currently most surgeons prefer to perform the secondary procedure as PRK on the SMILE cap. This would be similar to performing PRK over a LASIK flap.

The idea of having only one laser and eliminating many of the flap complications is quite attractive. Presently, the refractive outcomes for SMILE are approaching that LASIK, and there may be the potential of fewer dry eyes and a more stable cornea.

The SMILE procedure shows promise, and it will be interesting to follow its progress once it has FDA approval within the United States. 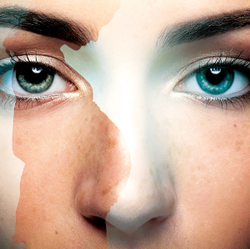 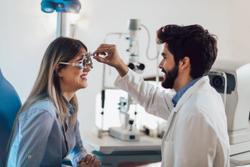 The many options of vision correction 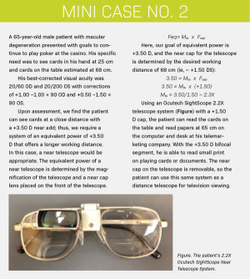