Be leery of large optic cups when screening for pediatric glaucoma

Kids with big optic cups make me leery. They always have. I will say that, like most ODs, I have seen far more cases of pediatric physiologic cupping than I have of pediatric glaucoma.

For this reason, I feel better when I see a large optic cup in the presence of a large optic disc. A big disc should have a big cup because the number of ganglion cells (a million or so) that converge to the optic nerve head is not governed by the size of the disc.

I had an experience as a young clinician at a school screening that drove home this concept.

I was a fourth-year student working at an ophthalmoscopy station of an elementary school screening with my binocular indirect ophthalmoscope (BIO) in hand.

To note: I am more comfortable with a BIO and 20.00 D lens at a school screening than I am using a handheld ophthalmoscope because I do not really have to direct gaze all that much.

Even if the pediatric patients just want to follow the light around with their eyes, I can still get a decent view of the optic nerve head, arcade vessels, and macula all in one go.

During this particular screening, I had, for the first time, an opportunity to look at a number of optic nerve heads consecutively in a short period of time.

The concept of vast difference between optic nerve head sizes became readily apparent that day. Even now, I make a note of optic nerve size in a patient’s chart. I do not take exact measurements, but I do make a qualitative remark of the size: small, normal, or large.

Scenario
With this notion in mind, a new patient was referred to me a few weeks ago for suspicion of glaucoma.

Accompanied by his grandfather, this 14-year-old white male presented with no other complaints. His medical history was remarkable for attention-deficit/hyperactivity disorder (ADHD), which was managed with a methylphenidate extended-release tablet every morning.

Visual acuity through his conventional spectacles was 20/20 in each eye (he wore a low hyperopic correction on an as-needed basis). Pupil function was unremarkable for each eye, and confrontational visual fields were intact for each eye.

Anterior segment examination was unremarkable for each eye to include open angles. Intraocular pressures (IOP) by means of Goldmann applanation tonometry were 24 mm Hg in the right eye and 21 mm Hg in the left eye at 2:15 pm.

He was a little apprehensive with his lids, but I think I prevented any squeezing from affecting my measurements. The patient was dilated with the consent of his grandfather, and each eye’s posterior pole was photographed (see Figure 1).

I judged each vertical cup-to-disc ratio to be around 0.65. Each corresponding optic disc appeared to be a bit large. With the help of a pre-corneal lens and my slit lamp’s red-free filter, I judged each eye’s retinal fiber layer-as it approached the optic nerve head-to be frankly intact without defects.

Each optic nerve also appeared to respect the ISNT guideline (inferior neuroretinal rim thicker than its superior counterpart and so forth and so on).

Findings
At the conclusion of the examination, I informed the patient and his grandfather that his optic nerves looked interesting but not pathological. I went on to explain what so-called “normal” IOP is, and that clinically ODs measure it only by an indirect means.

I told them both not to be concerned about the findings and advised the patient to return for a follow-up visit to include  additional testing of pachymetry, gonioscopy, spectral-domain optical coherence tomography (SD-OCT) studies of each optic nerve, retinal nerve fiber layer (RNFL) and ganglion cell complex (GCC), and consideration of a visual field study.

I also asked that they make time to have the patient’s follow-up visit during a morning so that I am able to get a feel for how his IOP behaves throughout the day.

My hope is that pachymetry will be the most useful piece of information, and that it will show thicker-than-average central corneal thickness values.

Wrapping up
This patient encounter reminds me how fortunate I am to be practicing optometry in this day and age. Even if I thought the patient’s retinal nerve fibers looked pristine, a young patient with big cups and slightly elevated IOP requires an OD’s close attention and access to ancillary testing technology available through a new generation OCT studies.

Although the normative database on my particular instrument does not include patients younger than 18 years of age, I can still receive qualitative information through such a study.

I am still hoping that pachymetry will give ODs the most information, for kids with big optic cups make me leery.

More from Dr. Casella: How inflammation may play a role in retinal disease 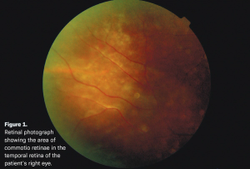