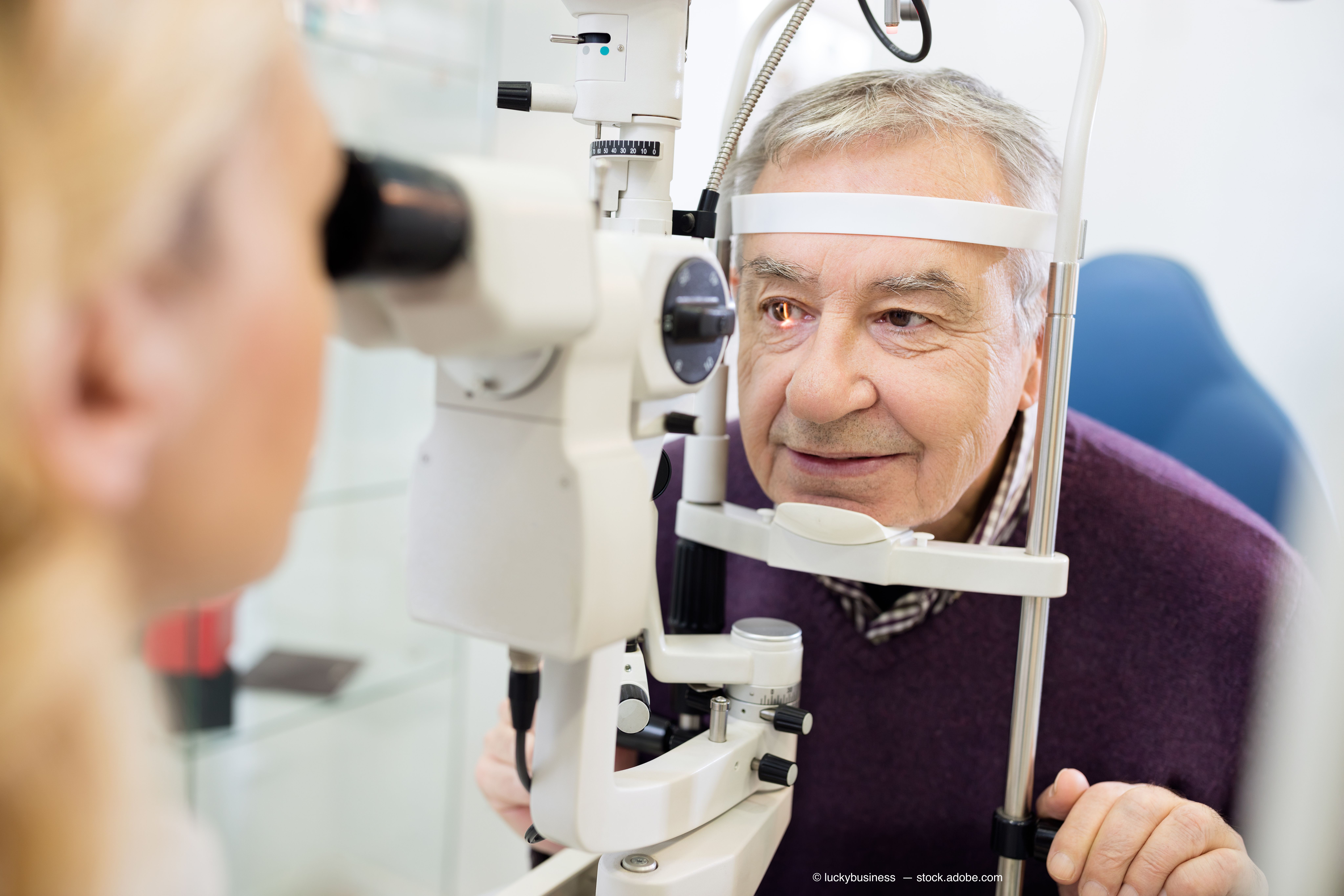 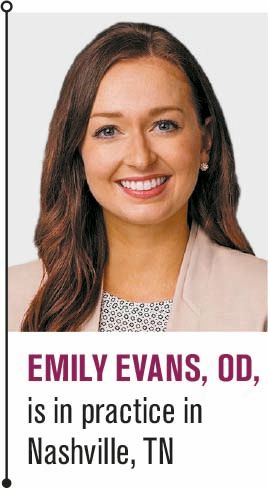 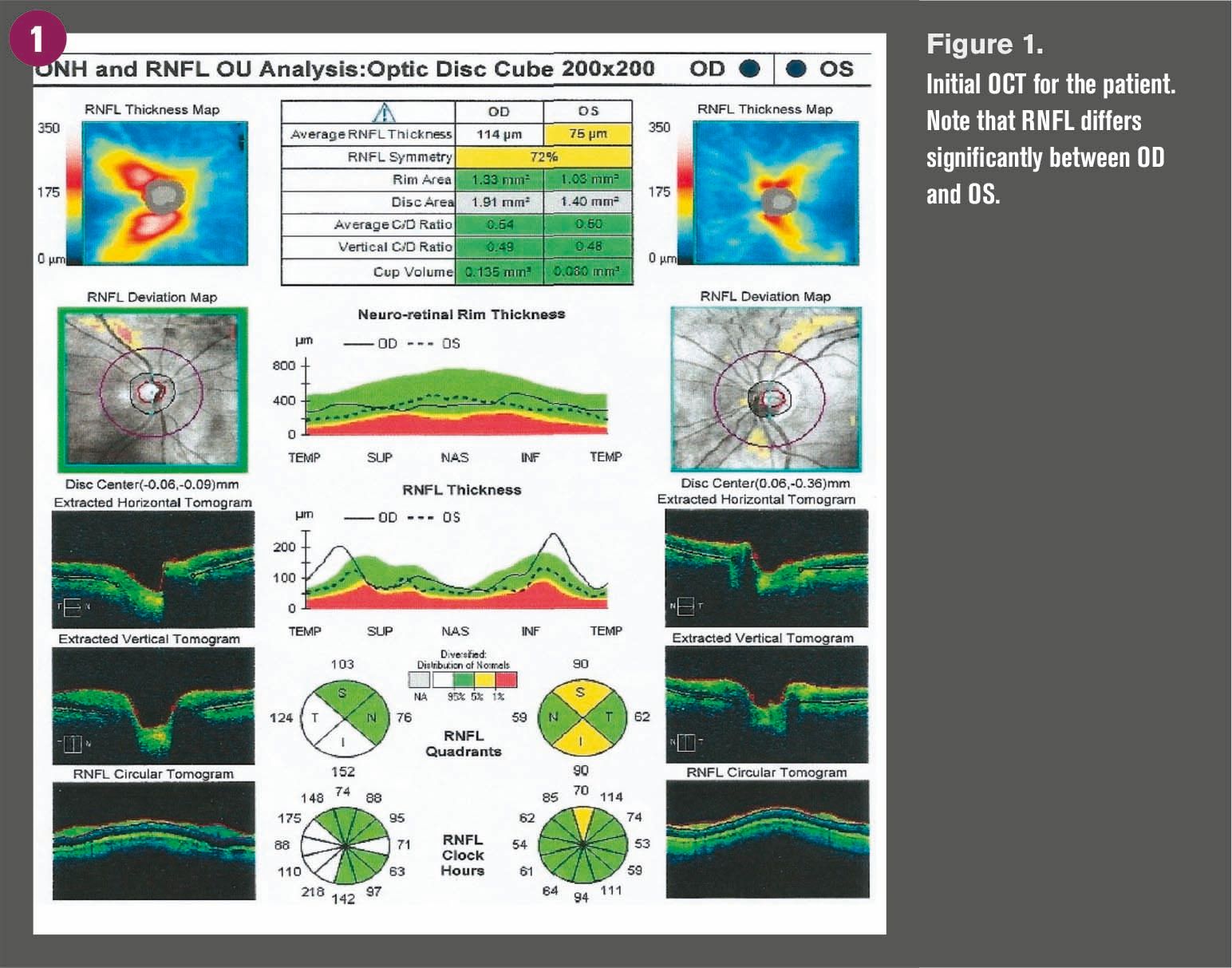 A 65-year-old Caucasian male presented as a work-in appointment with a chief complaint of sudden painless vision loss in the right eye, gradually worsening over the prior week.

When asked, he admitted to a right-sided temporal headache. He denied having jaw claudication, neck pain, or scalp tenderness, and his temporal artery was not particularly palpable or different from his left side.

History
His medical history was pertinent for Type 2 diabetes mellitus (with unknown A1C or blood sugar), hypertension, and high cholesterol, with compliance to all medications.

He admitted to not having had an eye exam in over a decade and reported no family history of ocular disease.

Clinical findings
Best-corrected visual acuities were counting fingers at 4 feet in the right eye and 20/30 in the left eye. Confrontation visual fields showed an inferior temporal

defect in the right eye with a full field in the left eye.

While facial symmetry and extraocular motility were normal without proptosis or ptosis, a 2+ afferent pupillary defect was found in the right eye.

His anterior segment exam was unremarkable.

Intraocular pressure (IOP) by Goldmann applanation tonometry was 31 mm Hg in both eyes. Upon finding elevated IOP, gonioscopy was performed, and a Grade 4 open angle was noted in all four quadrants in both eyes.

Blood pressure was 171/97 mm HG, which was reported by the patient to be “normal” for him. 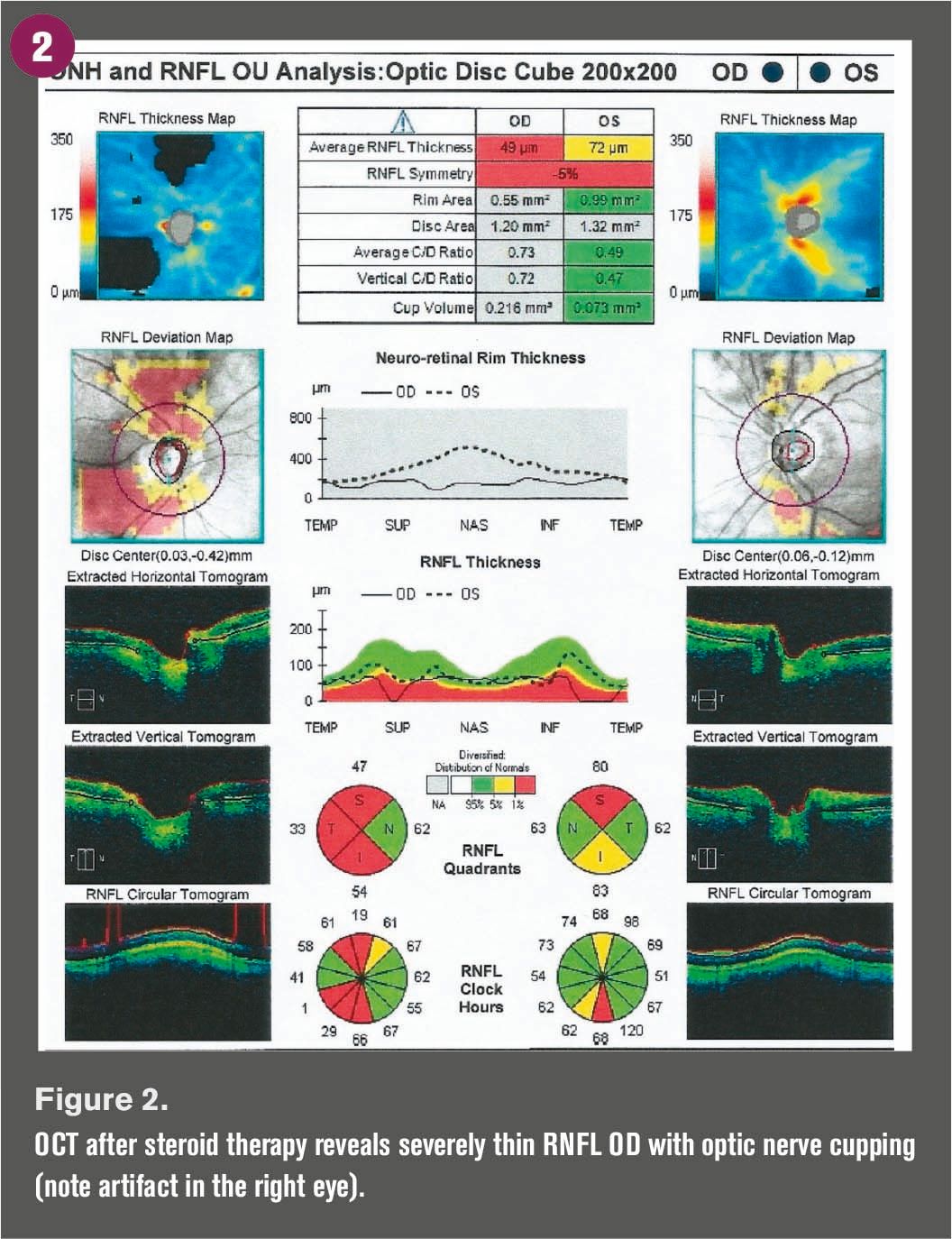 Treatment
Even with a non-thin retinal nerve fiber layer (RNFL) in the right eye, the high bilateral IOPs deemed it necessary to follow the community standard of care by initiating an in-office topical IOP treatment in both eyes.

After one drop of Alphagan P (brimonidine 0.1%, Allergan), IOP reached 22 mm Hg OD and 25 mm Hg OS before the patient left the office. He was given a sample of Simbrinza (brinzolamide 1%/brimonidine 0.2%, Novartis) to use three times daily in both eyes.

The patient was sent for same-day bloodwork with his primary-care physician (PCP) for complete blood count (CBC) with differential, erythrocyte sedimentation rate (ESR or sed rate), and C-reactive protein (CRP). A strong recommendation was given to the patient to manage his hypertension, and a prompt letter was sent to the PCP accordingly.

At his next day follow-up visit, visual field 24-2 was performed, which revealed a severe central visual field defect in the right eye and superior arcuate defect with nasal step in the left, corresponding to his OCT.

ESR and CRP were both significantly elevated: 46 and 6.9, respectively.

The patient was sent the same day to rheumatology for giant cell arteritis evaluation and was started on 40 mg of oral prednisone.

Temporal artery biopsy came back inconclusive, but after six weeks of oral steroids, the patient’s vision had improved to 20/100 OD, and his IOPs were much improved.

An optic nerve OCT was repeated (see Figure  2). The optic nerve swelling had resolved and subsequently revealed what was likely a combination of both post-AAION cupping and glaucomatous cupping.

Because both glaucoma and post-AAION status derive from similar vascular mechanisms, it is suggested that the acute ischemic event in an AAION acts as a faster version of the chronic ischemia occurring in glaucomatous optic neuropathy.1

Consequently, this patient is now being tapered off of oral prednisone and is being managed for glaucoma.

This case was complicated by the fact that there was no obvious optic nerve elevation seen on slit-lamp biomicroscopy, thus OCT had to be utilized to confirm disc edema.

Per the baseline OCT, it appears that the right eye has somewhat “normal” RNFL. These results are likely explained by assuming that the right eye started out with a lower RNFL thickness secondary to the undiagnosed glaucoma; however, with the mild disc edema, the retinal nerve fiber layer became artificially “normal.”

A small study showed that IOP is usually significantly lower in patients with giant cell arteritis, with hypotony occurring in one third of these cases.2 The difference in this case resulted from the concomitant glaucoma, causing IOPs to be high.

Additionally, in patients with giant cell arteritis, it is not likely that vision will improve after initiation of corticosteroid therapy, but this patient was part of the approximately 34 percent of patients who do have small improvement after steroid treatment.3

Conclusion
In a case such as this, communication with other specialties is vital. If AAION is suspected, time is crucial, and same-day bloodwork and urgent rheumatology consultation are both imperative.

This case additionally highlights the importance of noting the presence of concomitant illnesses. Currently there is no known causative relationship between AAION and glaucoma, but their similarities lie in vascular origin.1 In the future, optical coherence tomography angiography (OCT-A) may prove to be an important tool in the management of cases like this with ischemic optic nerve conditions.4