A closer look at the retina in multiple sclerosis

A 40-year-old black male was evaluated at UAB Eye Care for decreasing vision secondary to multiple sclerosis (MS). He had been diagnosed with the disease over 6 years ago and is currently under treatment with Avonex (interferon beta 1a, Biogen Idec). Currently he is a one pack-per-day smoker with a BMI of 27.1. He is an occasional partaker of alcohol (fewer than three drinks per week). Interestingly, he does not report treatment for a bout of optic neuritis.  Visual acuity was correctable to 20/30 OD and 20/20 OS with a minimal refractive correction. Pupillary reactivity was sluggish but without differential afferent responses. The anterior segment of each eye was unremarkable and intraocular pressure (IOP) was 14 mm Hg OU (Goldmann applanation).

Fundus evaluation was remarkable for optic atrophy and retinal nerve-fiber layer (RNFL) defects in each eye (Figure 1). In addition, there was an isolated CHRPE lesion observed in each eye. These were considered stable. An optical coherence tomography (OCT) scan was ordered for each eye to investigate quantitatively the RNFL thickness and, more importantly, the ganglion-cell thickness.

MS is a chronic autoimmune central nervous system (CNS) disorder characterized by focal and diffuse inflammation and demyelination as well as neuronal and axonal damage.1 In addition, recent evidence has suggested that average RNFL and macular ganglion-cell thickness is reduced in the disease and that these measures may be useful to establish diagnosis and as markers for progression. These features argue for a diffuse neurodegenerative process.2-6

The optic disc cube in each eye is shown in Figure 2. There is good quality signal strength. The average RNFL thickness is 64 and 63 µm OD and OS, respectively. It has been shown that average RNFL thickness is diminished in patients with MS, especially those who have had previous attacks of optic neuritis (ON).6 The optic discs are small, and both the RNFL thickness and deviation maps show RNFL thinning that is consistent with the fundus appearances. The cross-sectional images of the optic discs are incongruent with glaucomatous optic atrophy. The RNFL damage appears to be greater OS, which is the eye with better visual acuity.

The macular ganglion-cell analysis has excellent signal strength and shows considerable thinning in all sectors as well as grossly on the topographic presentations (Figure 3). It is unlikely that these are artifacts.

What may emerge is the use of OCT and specifically the inner retinal thickness presentations to confirm or even make a diagnosis of MS. Finally, if may be that the inner retina may become the focus for marking subtle changes that indicate progression. 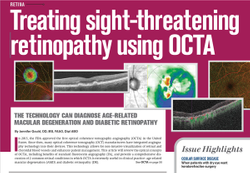 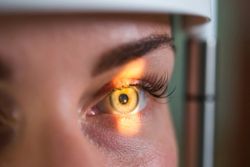