The etiology and pathogenesis of IOI has not yet been identified; however, molecular mimicry of self-antigens status post an acute infection, concurrent autoimmune disorders (Crohn’s, psoriasis, and ankylosing spondylitis), immune-mediated aberrant wound regeneration, and imbalance of inflammatory cytokines have all been proposed as having a contributing factor.1

Histologically, IOI is characterized by non-granulomatous inflammatory infiltrates, predominantly lymphocytic T-cells, which can be focal or diffuse.1

There is a total of 8 subclassifications of IOI depending on which structures in the orbit are affected by the infiltrates, including anterior IOI, diffuse IOI, apical IOI, myositis, dacroadenitis, peri-scleritis, perineuritis, and focal mass.1

Each sub-classification comes with a host of differentials, such as orbital cellulitis, inflammatory conditions (Tolusa-Hunt syndrome, sarcoidosis, granulomatosis with polyangiitis), thyroid eye disease, congestive cardiac failure, or orbital mass which need to be ruled out before a definitive diagnosis can be made.

IOI typically presents with unilateral injection, chemosis, and possible proptosis with associated symptoms of severe pain, the potential for restricted eye movements, and loss of vision. Just as the subclassification is determined by the structures affected, the symptoms are also dependent on which structures of the eye are affected.

Allergies include seasonal, and sulfa drugs. Family ocular and medical history include a father with type 2 diabetes and glaucoma.

Presenting visual acuities, without correction, were OD 20/150, PH 20/70 and OS unable to obtain. Confrontation visual fields were full to finger count OU. Upon extraocular muscle examination the right eye was found to have full range of movement and the left eye was found to have restricted movements 360 (see Figure 1).

Related: How to implement IPL into an optometry practice

Pupils were difficult to assess but appeared equal, round, and reactive to light with no afferent pupillary defect (APD) noted. With the extent of swelling in this case, it is important to thoroughly check for an APD to determine if the swelling is compressing the optic nerve.

Intraocular pressures were measured using Goldmann applanation tonometry by instilling one drop of Fluress (fluorescein sodium and benoxinate hydrochloride, Akorn) in both eyes and applanating the cornea. The pressures were found to be OD 18 mm Hg and OS 16 mm Hg.

Color vision testing with Ishihara plates was normal with 12 correct plates OU. This, as well as the negative APD, indicates that possible compression on the optic nerve due to the swelling is not an emergent concern.

Orbital cellulitis typically presents with severe eye pain, redness, swelling, conjunctival chemosis, proptosis, restricted eye movements, and a fever.2 Because S.O. presented with all of these symptoms besides fever, orbital cellulitis was high on the list of differentials.

The patient was immediately taken off of Inveltys and placed on 500 mg Augmentin (amoxicillin/clavulanate, GlaxoSmithKline) by mouth bid for 10 days. Topical erythromycin ointment was also added to treat the exposure keratopathy. An emergency computed tomography(CT) of orbits with contrast was ordered to rule out a mass-occupying lesion or congestive cardiac failure. CT results ruled out a mass-occupying lesion or cardiac failure and determined that the edema was confined to the preseptal space. The patient returned the next day with only minimal improvement, despite compliance with the Augmentin.

The patient was directed to continue the oral antibiotics for the full course and start 10 mg prednisolone by mouth 6 times per day. At this time, patient S.O. was referred to a rheumatologist for bloodwork to assess for inflammatory conditions, including; C-reacitve protein (CRP), rheumatoic factor, rapid plasmareagin/serology test for syphillis, thyroid stimulating hormone (TSH), thyroxine, complete blood count (CBC) with differential, angiotensin-converting enzyme, antinuclear antibody (ANA), myeloperoxidase, and proteinase 3. All lab tests, apart from CRP, were negative. This indicates that the cause is likely inflammatory, and idiopathic in nature.

Inflammatory syndromes, such as sarcoidosis or granulomatosis with polyangiitis, can cause similar signs and symptoms; however, will also present with elevated ACE and ANCA, respectively, as well as hilar lymphadenopathy with sarcoidosis. As the ACE and ANCA were negative, idiopathic inflammation of the left preseptal orbital tissue is more likely. The patient returned 4 days later with marked improvements.

At this point, the patient was definitively diagnosed with anterior IOI. Over the course of multiple follow-up visits, patient S.O.’s symptoms continued to improve, and the oral steroid was tapered by the rheumatologist. As the inflammation subsided with treatment, a peri-scleritis OS manifested, which is a known sub-classification of IOI. The topical steroid Inveltys,was re-started tid OS. Patient S.O. has since recovered with no further occurrences.

As mentioned previously, anterior IOI is one of many sub-classifications of IOI. The treatment strategy implemented for patient S.O. is considered common practice, regardless of the sub-classification. There are 11 potential treatment options, 3 of which are most common, including corticosteroids, non-steroidal anti-inflammatory agents (NSAID)s, and external beam radiotherapy (EBRT).1

In this case, the patient’s symptoms were managed with 10 mg prednisolone by mouth 6 times per day as the sole treatment. It is imperative that these patients are followed closely because IOI can affect any tissue within the orbit.1 The patient should be followed daily until improvement is seen.

Idiopathic orbital inflammation can be a difficult ocular condition to diagnose, treat, and manage. It is important to rule out other diagnoses such as orbital cellulitis or orbital mass before making a definitive diagnosis. It is also just as important to diagnose IOI in a timely manner because any orbital tissue could be affected, from compression on the optic nerve to exposure keratopathy.1 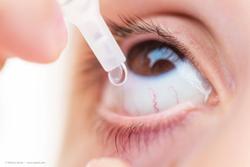