Water increases the effect of some pepper chemicals

Years ago, I treated a police officer who presented for a dry eye evaluation. While other doctors before me had treated him with tears and punctal plugs, I used steroids and cyclosporine (Restasis, Allergan) to control his ocular inflammation. Following any use of pepper spray, he would see the departmental doctor who would insert plugs to improve his extremely dry eye.

This would inevitably backfire, and within 2 weeks he would return to the office begging me to remove his plugs. Each time I would remove them, treat with a topical steroid taper, and maintain topical cyclosporine. Despite my written instructions on how to better treat his ocular surface following exposure, this cycle went on for years.

Related: 2020 not the year ODs hoped for

As healthcare providers, ODs may be called on to assist those who have been affected by tear gas, pepper spray, and other agents used during periods of unrest. It is not their job to judge but rather to assist these patients by resolving pain and promoting healing. While exposure to these irritants may be common to military medical personnel, civilian practitioners may not be as familiar. This article is not meant to incite political discussion regarding the intended or actual use of these agents. It is to educate readers on the history of and management of exposure to them.

To begin, a historical perspective on chemical warfare may be of value. Chinese armies used “stink pots” in 2300 BCE during warfare. They burned red peppers in hot oil to produce offensive smoke to burden their opposition prior to attack. Japanese fighters ground peppers to a fine dust and wrapped the dust in rice paper to throw into the faces of opponents.

Wood saturated with pitch and sulfur was burned to create offensive smoke in the Peloponnesian wars (431 BCE). “Greek fire,” a liquid containing sulfur, lyme, pitch, resin, and petroleum, was pumped into the water in front of ships and burned. Greek fire and hot oil were catapulted over walls in the Middle Ages.1

Chemical agents in grenades of clay and glass jars were first used in the 13th century. Separate containers would contain two different chemicals, resulting in a chemical reaction when mixed.

Bacteriolgical warfare was first used in 1422 in Italy when cartloads of horse manure were launched over city walls to the detriment of those inside the city of Tarantine.

The Civil War saw the first chemical warfare in America. Wood covered with pitch and sulfur was burned around cities. Greek fire was used on coastal cities.1

During World War I, omega-chloracetophenone (CN) was used to train soldiers using masks. In 1913, Germans used diphenylaminechlorarsine (DM) to make enemies sick, requiring removal of gas masks to strengthen exposure.2 This was later used by British police during civil disorders, resulting in several deaths.1 It was declared a war gas by the United Nations and banned for export from the U.S. in 1958.1

In 1928, scientists developed orthochlorbenzalmalononitrile (CS), which irritated the skin and respiratory system as well as the eyes. Lacrimators and irritants were widely used during World War II. English scientists developed dibenzoxaprine (CR) in 1962, but leaking containers caused third-degree burns on military police so it was discontinued.1

Oleoresin capsicum (OC) was introduced in 1982. This inflammatory agent is produced from cayenne or chili peppers. It causes lacrimation, blepharospasm, and capillary dilation. The mucous membranes are directly affected, causing swelling in the nose throat. Skin inflammation may result. It is the most commonly used agent in policing, riot and crowd control, and self-defense, including defense against attacking animals.3

Effects of these gases

High concentrations of CN may cause corneal damage, opacity, and permanent visual impairment. Papulovesicular dermatitis and superficial burns may affect periocular skin. Ingestion of food or water contaminated with CN may result in ulcers, nausea, vomiting and lower GI upset. Exposure to CS may result in abortion or premature labor and delivery in pregnant women. Hydrolysis of CN is slow in aqueous solution, difficult to decompose or decontaminate while CS can be easily inactivated using water with soap.

OC may cause more intense burning to eyes, nose, and respiratory tract than other products, with difficulty breathing due to throat closure, loss of motor skills, and inability to speak.4 OC is also associated with keratitis, conjunctivitis, corneal burns, and damage to nerve fibers.

Related: Homeostasis is the Holy Grail in dry eye disease

A peptide neurotransmitter called substance P is generated by nerve endings within the central nervous system (CNS) to transmit pain signals. Upon contact with skin, capsicum causes depletion of substance P, telling the brain the body is suffering life-threatening pain and results in disorientation. When Substance P is applied to small areas, transmission of pain from the area may be reduced, and this treatment may be used to address chronic pain. In the eye, however, this effect may be catastrophic.

Subtance P is also considered a polypeptide neurotoxin because aerosol inhalation causes rapid loss of blood pressure and may result in loss of conscieousness within seconds. Direct skin contact results in a similar but delayed reaction (10 to 15 seconds). Note than those with darker skin will have a significantly delayed reaction of up to 5 minutes. Prior exposure to pepper products will increase response time.

The Scoville Heat Scale was used in the 1920s to assess the “hotness” of certain foods; the foods were mixed with a sugar solution and sampled by five trained testers. This process was abandoned due to subjectivity and replaced by science such as high-pressure liquid chromatography. The unit of measure is the Scoville Heat Unit (SCH). Examples of levels of potency using this measure are noted in Table 2.

Unfortunately, it is common to boost the “hotness” level of OC products without information on boosting released to the public. In addition, different products may be blended to enhance effect. OC/CS combinations are referred to as “Fortified Mace” or “Freeze+P.”

The molecular target of capsaicin TRPV1 is a transient receptor potential (TRP) ion channel expressed in nociceptors.5 These receptors are part of the pain-sensing sensory nerves of the trigeminal, vagal, and dorsal root ganglia (DRG). Nociceptors are located in the skin, cornea, and conjunctiva, as well as in mucous membranes of the respiratory system. TRPV1 promotes neuronal depolarization when activated, acting as a warning sensor for imminent tissue damage.5 TRPV1 is sensitized through signaling from a range of G protein–coupled receptors including bradykinin, prostaglandin, nerve growth factor, cytokine and chemokine receptors.

The tear gas agents CS, CN, and CR have been linked to a single target, TRPA1, despite being structurally dissimilar. TRPA1 is also a TRP ion channel expressed in nociceptors. Pain neurobiological research has demonstrated that TRPA1 is also the target of mustard oil, wasabi, and horseradish. This will not come as a surprise to anyone eating these foods by mistake.5

Ocular and nasal pain are sensed almost immediately after exposure to CN, CR, and CS as well as OC due to activation of TRPV1 and TRPA1 receptors in trigeminal nerve endings in the cornea and nasal passages. Chronic TRPA1 activity creates nerve calcium overload and excitotoxicity. This results in chronic pain signaling and peripheral neurodegeneration, a loss of sensation, or altered sensations.5 When ligands of TRPV1 and TRPA1 are applied topically, extensive desensitization and remodeling of cutaneous nerve endings may occur.

Corneal TRPV1 and TRPA1 activation provides immune responses to noxious environmental stresses such as temperature fluctuations, rises in ambient osmolarity, mechanical stretch, decline in pH, tissue injury, and exposure to irritant ligands.6 Expression of TRPV1 is demonstrated in the corneal epithelial cell membrane in addition to corneal nerve fibers.6 This is particular disconcerting for patients with diabetes and pre-existing neurotrophic corneal disease.

As previously stated, the most common effects of these agents include lacrimation, blepharospasm, conjunctivitis, keratitis, periorbital erythema, and edema.

Photophobia may occur. Because CR/CN/CS are solids, dust may be captured beneath the eyelid or embedded in the cornea or conjunctival tissue and require removal.1 OC solvents may cause corneal abrasions.

Periocular skin erythema and pain may be significant, particularly when the skin is raw or in high temperatures, humidity, or agent concentration. Erythema may occur hours after CS exposure, followed by vesication. This appears similar to a severe sunburn.1 Oral steroids may be required for severe dermatitis.8

Some evidence indicates that OC temporarily inhibits the blink reflex and limits responsiveness to mechanical and chemical stimuli to the eye.11 Recurrent corneal erosions have also been reported.12

Following are recommendations to decontaminate eyes and skin.

Eyes: Thoroughly flush with water, saline, or similar substance. Note that water increases the effect of OC, so copious volumes should be used. Ensure no particles remain in ocular tissue. A study comparing the use of water versus baby shampoo with water found the use of baby shampoo was unhelpful following exposure to CS and OC.14

Skin (CS, CN, CR, and DM): Flush with copious amounts of water, soap and water, or a mildly alkaline solution (sodium bicarbonate or sodium carbonate). Decontamination is not needed if the wind is brisk and particles may be shaken off clothing and hair.7

Skin (OC): The pain from OC will increase with water, especially warm water. It is best to decontaminate with baby shampoo, milk (which contains casein), alcohol, or vegetable oil. Without decontamination, pain will subside over time.1

Educate patients regarding delayed symptoms and signs of increased ocular surface disease. Patients should be instructed to contact the OD should symptoms progress rather than resolve. Autoinflammatory treatments such as hypochlorous acid, topical steroids, and NSAIDs may be beneficial. For those with repeated exposure, periodic evaluations to assess corneal health may be advised. 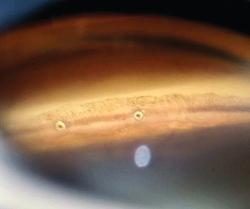 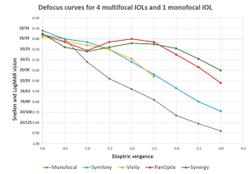 A guide to the latest presbyopia-correcting IOLs