Look at more than the optic nerve head in glaucoma patients 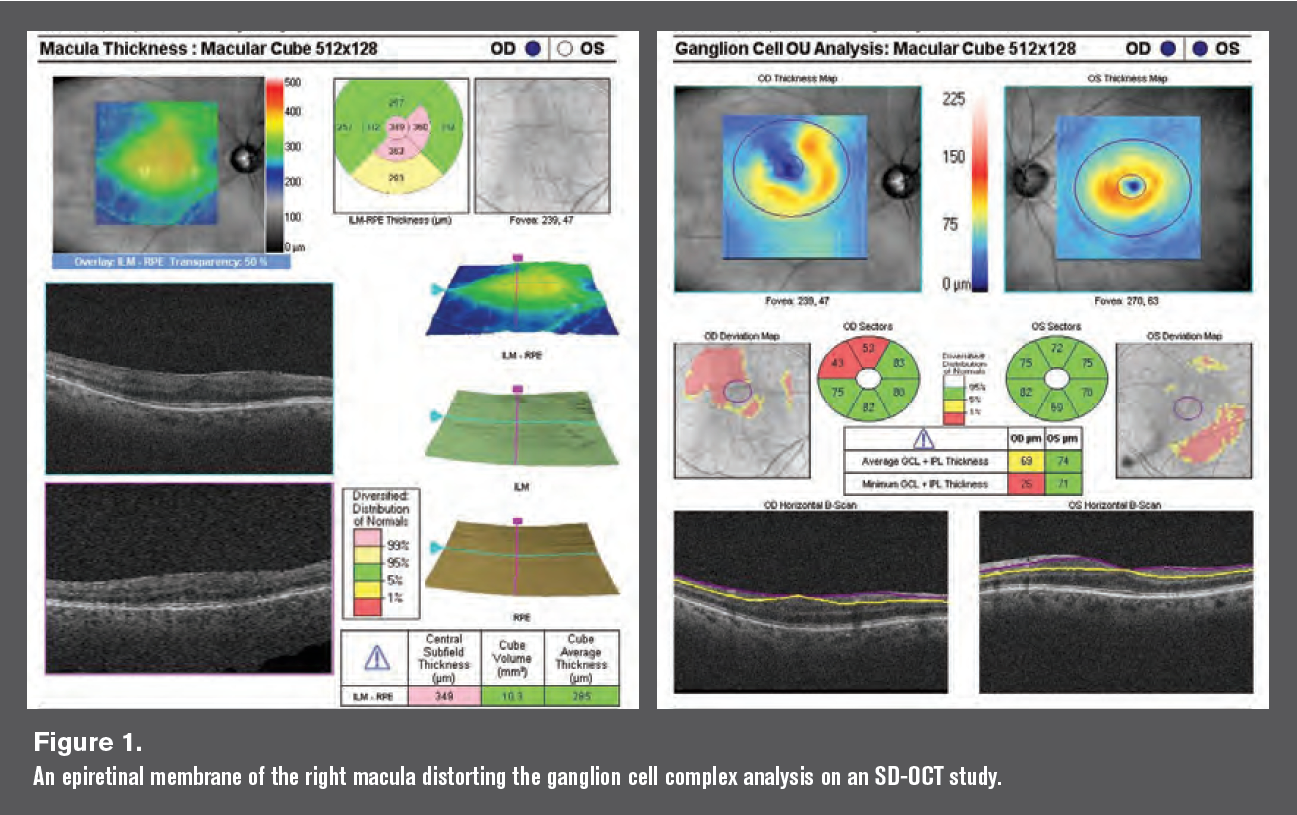 I often recall fondly how one of my mentors, Mitch Dul, OD, FAAO, told me that patients can have “as many diseases as they pleases.” We know this to be the case because we see it every day. We go to continuing education conferences where we see nice tidy cases and think, “I got this! This is easy!” Then, we get back to the office on Monday morning and are inundated with a slew of patients with lurking variables in their eyes and visual systems.

Go beyond the optic nerve

I take comfort in the fact that I know I’m not alone, and a paper published in the Korean Journal of Ophthalmology in October 2019 does well to hammer home the fact that, with respect to glaucoma, clinicians must take into account the rest of the eyeball and not just the optic nerve head.1

This retrospective study consisted of a cohort of established glaucoma patients with newly diagnosed epiretinal membranes (ERM): 28 eyes of 28 patients (16 males, 12 females). Of this cohort, 22 patients had primary open-angle glaucoma, three had pseudoexfoliative glaucoma, two had uveitic glaucoma, and one had chronic angle-closure glaucoma. Ages ranged from 44 to 73 years with a mean age of 61 years.

Subjects had SD-OCT studies before and after the onset of ERMs. Humphrey visual fields had also been obtained prior to and after ERM onset. Axial length and central corneal thickness values were also taken into consideration, with a mean axial length of 23.5 mm and a mean central corneal thickness of 542.9 Î¼m. Mean spherical equivalent refractive error was 1.40 D of myopia.

The onset of an ERM lead to a mean increase in the average RNFL thickness of 4 Î¼m. The temporal RNFL sector (as one may expect) demonstrated the most significant increase (a mean of 14.4 Î¼m). Such an expectation would be due to the location of the ERM, typically situated temporal to the optic nerve head. The central macular thickness values increased at an average of just over 33 Î¼m after the onset of ERM as compared to before. There was a slight but significant decrease in mean deviation of just under 1 dB in the visual fields.

Related: Be leery of large optic cups when screening for pediatric glaucoma

The authors of this paper separate out three distinct and significant arenas for which this study has important implications.

The first aspect has to do with glaucoma diagnosis and its potential delay. The onset (or progression) of an ERM can confound RNFL analysis, as measured by SD-OCT technology, thus having the potential to lull the clinician into thinking that RNFL loss is not occurring and that glaucoma is not present (Figure 1). This may be especially important in early so-called “pre-perimetric” glaucoma in which a patient’s visual field is not yet affected enough to become manifest on a visual field study. ODs, of course, want to detect glaucoma as early as possible in the hope of preserving visual function.

Secondly, detection of glaucoma progression, at least progression as measured by decrease in RNFL thickness, may be delayed as a progressive ERM begins to throw off SD-OCT results by masquerading as part of the RNFL. Progression means that anti-glaucoma therapy is not achieving its goal.

Lastly, if an ERM becomes significant, it can be surgically removed. In patients who have undergone a vitrectomy and membrane peel, their post-surgical inner retinas will have laid down as compared to their pre-surgical inner retinas. This surgical outcome may lead a clinician to think that the RNFL itself has decreased in thicknes from the presence and progression of glaucoma.

Related: Know the hidden links among glaucoma, contact lenses, and the cornea

This was a small study, and, being retrospective in nature, not all data was collected at set intervals. However, this study does well to point out the fact that ERM can affect the diagnosis of glaucoma and the monitoring for its progression in a clinically significant way.

SD-OCT technology is getting more similar to in vivo histology as the years ago on, but ODs cannot lose sight of the fact that we have to actually look at patients with our own eyes in order to have the full picture.

As I write this, my mind is drawn to other potential lurking variables with respect to glaucoma, such as endothelial corneal dystrophy affecting pachymetry and cataract or stroke affecting visual field assessment. As much evidence as we can gather is desirable in hopes of thwarting confounders and taking good, accurate care of our patients.