For many ODs, Lyme disease (Borrelia burgdoferi) and it’s 22+ variant cousins hit close to home. My father has been bitten by infected ticks  with these spirochetes from the genus Ixodes (primarily Ixodes scapularis) over seven times.

This narrative can be repeated with slightly different wrinkles by almost anyone who has been exposed to or knows of a family member or friend in kind. Incidence has more than doubled in the past 13 years with reported cases numbering 30,000 to 43,000 per year.1,2

Admittedly, the Centers for Disease Control (CDC) has said the figure is grossly underestimated by 10 fold coming in at 300,000 cases per year.1 This disease has been a silent epidemic in the United States-and now early stages in Canada-for the last 45 years.

Back in 1975, two desperate mothers from Old Lyme, CT, sought help after seeing an outbreak of arthritis and juvenile arthritis around town.3,4

Staring down a litany of unexplainable symptoms and unsatisfying diagnoses, they contacted the Yale School of Medicine and Connecticut State Department of Health. This initial inquiry would spark a widespread investigation that would culminate in the characterization of what is now widely known as Lyme disease.

First studies
The initial study focused on the three contiguous towns of Old Lyme, Lyme, and East Haddam where 51 residents were diagnosed with juvenile arthritis or arthritis of unknown cause (39 children and 12 adults) out of a total population of 12,000.5

While early physical examinations and laboratory tests revealed nothing abnormal, the interview painted a different picture.3 A geographic and temporal element to these cases showed multiple family members infected along with a noted appearance in more wooded areas outside of city/town centers with heightened activity from June to September.

Additionally, approximately 25 percent of patients in the study reported a skin lesion with an expanding bull’s-eye pattern four or more weeks preceding the onset of arthritic symptoms.5

Researchers found this to be particularly intriguing because the lesion correlated in description to erythema chronicum migrans (ECM), or erythema migrans (EM), a lesion previously reported in Europe that was thought to be a result of an unknown infectious agent but had never before been associated with arthritis.5,6Related: How the Japanese treat allergic conjunctivitis

They would dig further back in the annals of the literature finding EM first mentioned in a presentation at the 1909 meeting of the Swedish Dermatological Society in Stockholm.4 EM was sometimes associated with a tick bite and was accompanied by nerve pain, paralysis, or meningitis.

In European circles, doctors believed that EM might have been caused by an unknown bacterium, and penicillin and other antibiotics were moderately effective at treating it.

This connection between ticks and EM led scientists to hypothesize that Lyme disease might be transmitted by a tick bite.

Sneaking tick
With working conditions in place, researchers would find in 1976 that 30 new patients were identified with the illness.7 The new data strengthened the connection between the initial presentation of EM and the later development of arthritis. The Yale team would officially declared EM as the initial mark of infection and as the diagnostic hallmark of “Lyme arthritis,” the initial name given for the disease by the investigators.8

Interestingly enough, EM would be found later to only be present in less than 50 percent of cases.

Shifting backward from the disease presentation to the causative agent, the Yale team would hypothesize that a tick was a likely vector of Lyme arthritis as early as 1976.5,7,8

In 1978, the team showed epidemiological evidence for a tick vector by expanding its surveillance of the Lyme area across the Connecticut River.9 It found that the incidence of Lyme arthritis was 30 times greater on the east side of the river, where Lyme, CT, is located, than it was on the west side, similar to the difference in deer and deer tick distribution in the area.

Scientists later confirmed that ticks indeed are the transmission vector of the infectious agent in Lyme disease. In the U.S., Lyme disease (Borrelia burgdorferi), Babesiosis, Powassan Virus and Anaplasmosis are transmitted mostly by the deer tick, or Ixodes scapularis, member of the Ixodes family.

It is well established that deer play an important role in the tick life cycle by supplying a blood meal and potentially serving as a mating ground for adult ticks.

Accordingly, the recent explosion of the United States deer population is thought to be responsible for the dramatic increase in the instances of Lyme disease, particularly in the Northeast by greater than 320 percent.12

As could be expected, an effort to decrease the prevalence of Ixodes scapularis ticks and Lyme disease by controlling of deer populations have been proven successful and is one of many possible Lyme disease prevention strategy.

Another emerging trend as an early surveillance system is observing hot spots where dogs test positive for the disease as a measure of when the infective species may arrive in new geographic areas.13

More than ‘Lyme arthritis’
It became clear to the Yale team  by the early 1980s that “Lyme arthritis” was nothing more than only a small piece of a larger puzzle.

Now that the EM skin lesion was confirmed as the initial sign of infection, researchers made a massive effort to inform and educate the area near Lyme. They would ask local healthcare providers to refer patients to them soon after infection, enabling them to further characterize the disease and onset.

As a result of these further studies, the team reported that Lyme disease can manifest in a variety of systemic ways, including those involving the nervous system plus the eyes, heart, and joints.14-20

By 1984, serology testing that had been in development was released for public use, and Lyme disease 1987 it became a reportable disease to the Connecticut State Department of Health. Escalation to the national media would occur the following year in 1988 when people started coming forward with severe cases.

Early localization initially presents with the characteristic bull’s-eye patterned lesion, EM. This lesion can last anywhere from several days to several weeks and is most often accompanied by severe fatigue, myalgia, arthralgias, regional lymphodenopathies, and headaches or fever.3,21

The initial EM lesion can sometimes spread to produce smaller, secondary lesions three to five weeks after the primary lesion. As the spirochetes begins to spread throughout the body, early dissemination sets in, causing potential Neuroborreliosis which can best be described as a constellation of signs and symptoms including confusion and short term memory loss, headaches, insomnia, increased intracranial pressure communicating to papilledema along with additional satellite EM lesions, neck stiffness, facial palsy, severe neuralgia, and heart palpitations. The exact etiologies are still not fully understood.

Related: Topical antibiotics are effective, say those who Rx them for blepharitis

Late dissemination and chronic disease presents in a more pervasive fashion in that the patient can experience concussion or dementia-like symptoms related to Lyme encephalopathy with subtle cognitive difficulties, general feeling of being unwell, and/or changes in personality.

In extension, flare-ups of encephalomyelitis may trigger progressive features such as “brain fog,” vertigo, intermittent facial paralysis, cerebellar balance and gait deficiency, urinary incontinence, and back pain. In rare cases, there have been reported instances of psychosis.

Ocular Lyme presentation
When describing this condition within the eye, the best characterization is the “great imitator.” Ocular symptoms and signs are wide and vast, affecting all structures from the anterior to posterior segment (see Table 1).

Similar to systemic phasing, three ocular stages break into what I refer to as acute, ramp up, and smoldering sections.

The acute stage most commonly appears as a follicular conjunctivitis, mirroring a viral infection, followed by episcleritis.

Related: Why ODs should care about antibiotic resistance

The ramp up dives deeper into the tissue with presentation ranging from anterior to panuveitis, including a syphilitic/HIV mimicry of neuroretinitis paired with multiple cranial nerve bundle manifestations.

The smoldering stage looks similar to dry eye disease, viral conjunctivitis, or Thygeson’s superficial punctate keratitis with the appearance of multiple subepithelial infiltrates and bilateral keratitis. This stage can take months to years to become apparent to both the patient and the eyecare provider.

Treatment
Steere and Malawista reported in 1977 the presence of common antibodies extracted from patients experiencing an active EM lesion or active arthritis.7

Consequently, it was interpreted that there may have been a common origin for these two clinical symptoms. While it took several years before the infectious agent(s) that causes Lyme disease  was isolated, the Yale team had growing evidence for the role of a bacterial infection in the disease.

In 1980, Steere and Malawista determined that antibiotic treatment “shortens the duration of ECM and may prevent or attenuate subsequent arthritis.”22Related: Antibiotic resistance in the eyecare practice
The study consisted of 113 patients who presented with the EM lesion. Half of the group did not receive treatment, while the other half was treated with antibiotics. In patients who did not receive antibiotics, the EM lesion and associated symptoms resolved within 10 days. Those patients receiving antibiotic treatment experienced faster resolution of EM, within four days.

Antibiotic therapy, specifically doxycycline, is still the major line of treatment for Lyme disease. With this said, there is growing evidence that by understanding and attenuating the outer surface protein epitopes (Osp) of the spirochete pathogen, a potential new vaccination is on the horizon.24,25Read more content by Dr. Cooper

SmithKline Beecham (now GlaxoSmithKline) from 1998 to 2000 licensed LYMErix, a recombinant vaccination targeting OspA; it was 78 percent effective but failed overall.25,26 A permissive recommendation to the primary-care community lead to minimal usage compared to a requirement.27

In some respects, this cautionary tale is a double-edged sword. If there was more public distribution, the more serious side effects, including fatality of the product, might have scared off other pharmaceutical companies from pursuing any future endeavors.

While it has taken many years to dissect the genomes of these pathogens, I am glad to report this has not been the case as New York State in 2018 commissioned Regeneron to perform research and development of potential new lines of Lyme disease treatment, including vaccination.28Related: Applying precision medicine to glaucoma and genomics

What lies ahead
The future is promising for individuals who are newly infected or suffer from chronic Lyme disease. Moving forward, eyecare practitioners must step up their games in identifying and managing these cases with primary-care, infectious disease, and rheumatology colleagues.

As my father would always say while rifling through my hair as a child looking for ticks after playing outside, “awareness is preparedness.” A dose of reality never hurt anyone, especially in the presence of these real-life body snatchers.

27. King LP. The Ongoing 30-Year Lyme Disease War: Case Study of a Failure to Communicate. The Yale Forum on Climate Change & The Media. 2008. 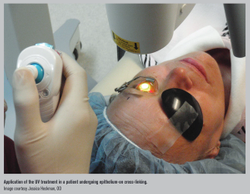 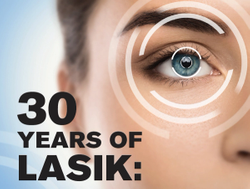 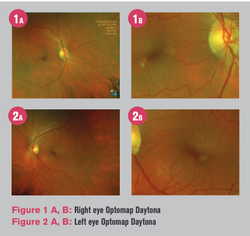 More than a yellow lesion?