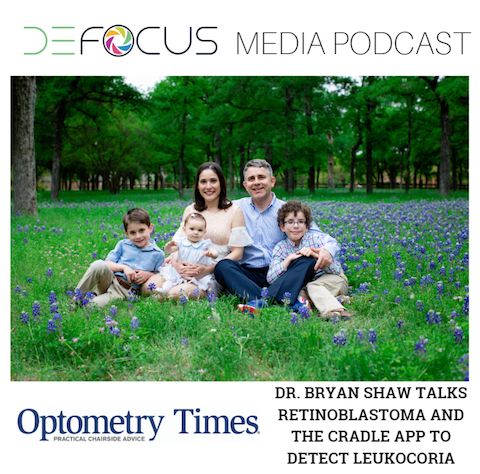 For parents whose children are diagnosed with retinal tumors or congenital cataracts, the process of learning their child has a vision or even life-threatening disease can be challenging.

At birth and then again at their regular pediatric well-checks, infants are screened by doctors with direct ophthalmoscopy, looking for a tell-tale white reflex, or leukocoria.

But detecting the presence of leukocoria can be challenging for general practitioners who are not eyecare specialists, prompting states like Florida to propose a law that would mandate dilation within 48 hours of a child’s birth.1

White reflections in pictures
Early detection is key to improved outcomes for these patients born with retinoblastoma, as Dr. Bryan Shaw learned firsthand. Dr. Shaw is not an optometrist but a biochemistry professor at Baylor University. When he was completing his postdoctoral work, he got devastating news: his son was diagnosed with bilateral retinoblastoma.

Related: Telemedicine in optometry: is it inevitable?

His son Noah was diagnosed at four months old, hours after he and his wife mentioned to their pediatrician at a well-check visit that they had been noticing white reflections in Noah’s pictures for about a month. The family was immediately referred to an ophthalmologist across town who dilated Noah’s eyes and diagnosed him with bilateral retinoblastoma. The family traveled to a children’s hospital in Boston for treatment and care.

Dr. Shaw often reflects that if he and his wife hadn’t mentioned their concern, how long would it have taken for their pediatrician to notice a problem with Noah’s eyes.

Diagnosis
Unfortunately, this story is all too common. The average age of diagnosis of bilateral retinoblastoma is between nine and 12 months, and for unilateral retinoblastoma it is 24 months.2 Research shows that it is often parents, not doctors, who see the first signs of disease. Detection of the initial presentation (typically leukocoria) in kids with retinoblastoma was found by parents or family members in 80 percent of cases.3 Pediatricians detected the initial symptoms in only 8 percent of patients.

Direct ophthalmoscopy is a difficult skill for pediatricians due to the difficulty of the instrumentation and the limited time they are trained on this instrument in medical school. As optometrists who spend a good portion of the four-year curriculum in mastering this piece of equipment, it comes as no surprise that practitioners who are not eye doctors struggle with the art of ophthalmoscopy.

Related: Use technology advancements to modernize your practice

Research shows that the doctors performing well-check pediatrician visits routinely miss these early presentations of leukocoria, and alternative approaches to ocular care are being explored, whether through artificial intelligence or dilated examinations.4 In optometry, the InfantSEE program offers no-cost comprehensive ocular care for infants aged six to 12 months-providers have examined over 150,000 patient to date and identified over 18,000 patients with vision or ocular health conditions.

But for patients born with retinoblastoma, detecting the condition even earlier than a six-month InfantSEE visit could have significant impact on the possible treatment options and outcome.

In Noah’s case, home photographs showed evidence of leukocoria at 12 days old. What could have been the outcome if his retinoblastoma had been detected and treated at this much earlier age? By four months when Noah’s tumors were detected, he underwent systemic chemotherapy, laser photoablation, and proton beam radiation of one eye and enucleation of the other eye. Earlier detection could have potentially prevented the need for radiation and enucleation, according to Noah’s ophthalmologist.

App development
Once Dr. Shaw found out that he had the signs of Noah’s cancer in his own cell phone photo library four months before he was diagnosed, the light bulb went off. He decided to create an app using artificial intelligence that could help parents detect leukocoria in their own children’s photos.

Working as a post-doctoral fellow at Harvard, he was in the perfect place to innovate and create.

“You work there for four years, and you come out and nothing is impossible. I never doubted it or felt discouraged,” Dr. Shaw says when asked why he was confident that he could build an app capable of detecting leukocoria.

To make his plan come to reality, he partnered with Dr. Greg Hamerly at Baylor who helped him create the machine-learning technology that detects leukocoria in pictures. It took about a year to build the core technology behind the app that they named ComputeR-Assisted Detector of LEukocoria (CRADLE).

How the app works
Downloading the CRADLE app gives permission to access the user’s photo library and scan the images inside for presence of leukocoria. With the Android version, the technology runs in the background scanning every photo taken; the iPhone version searches the usuer’s full photo library every time the app is opened. Photo uploading into the app is not necessary.

If the app detects leukocoria, it will alert the user privately, and parents have the option of sharing these leukocoric photos with the creators of the app to help build the machine learning software. The more photos in a user’s library, the better the app works. The app cannot distinguish physiologic leukocoria (light at random catches the optic nerve) versus pathologic leukocoria; however, the rate of physiologic leukocoria is very low.

The app also works in video mode, which actively screens each video frame in real time for leukocoria.

Results of the CRADLE app were recently published in Science Advances.3 The sensitivity of CRADLE at detecting pathologic leukocoria in facial photographs of children was 75 percent at age <6 months and 90 percent at age <2 years. There was a 0.7 percent false positive rate.

How can doctors help?
“We need photographs,” Dr. Shaw says.

Currently, the app’s software is built on the photos of children with leukocoria that parents have shared with him (over 52,000 photos to date). To improve the capabilities of the app, app developers need photos of disease from patients of different ethnic backgrounds and in diverse lighting and angles.

ODs able to help Dr. Shaw on his mission by sharing Health Insurance Portability and Accountability Act (HIPPA)-compliant photographs of children with leukocoria and known eye disease, contact him at brian_shaw@baylor.edu.