Tackling RP from all angles: From diagnosis to bionics

During a presentation at the American Academy of Optometry 2021 annual meeting in Boston, Micaela Gobeille, OD, MS, FAAO, discussed keys to the successful management of retinitis pigmentosa.

Retinitis pigmentosa (RP), a progressive rod-cone dystrophy, is the most common hereditary retinal dystrophy, and is characterized by progressive vision loss throughout the patient’s life beginning at diagnosis in young adulthood.

The management of the vision of these patients is paramount because of the great range in disease severity over a lifetime, according to Micaela Gobeille, OD, MS, FAAO, who practices at Solinsky EyeCare in West Hartford, Connecticut, Holyoke Health Center in Holyoke, Massachusetts, and IN-SIGHT Vision Rehabilitation in Warwick, Rhode Island.

RP diagnosis can be challenging because its presentation can vary greatly. Symptoms include night blindness, photopsias in about a third of patients, and visual field loss. During her presentation at the American Academy of Optometry 2021 annual meeting in Boston, she noted that the central visual acuity is relatively spared until late in the disease process, she noted.

A diagnosis can be established with a few tools available to clinicians, including visual field (VF) testing, electroretinography (ERG), and genetic testing.

The classic appearance seen on VF testing includes a mid-peripheral ring scotoma, peripheral islands, and preserved central vision. This appearance tends to be symmetrical in both eyes. Generally, the rate of VF loss is 15% to 17% of the remaining VF area annually.

Genetic testing in RP has identified multiple inheritance patterns, specifically, autosomal dominant in 30%, autosomal recessive in 20%, X-linked recessive in 15%, and sporadic in 30%, with more than 40 different genes implicated. Genetic testing for RP requires multi-gene panels; however, the genes included in the test panel vary by laboratory as does the sensitivity and specificity of the test for each individual gene.

Gobeille advises that genetic testing in RP should be ordered when the diagnosis remains unclear after the other tests are completed. It is also important to provide information about the patient’s genetic risk profile to facilitate genetic counseling and to determine eligibility for gene therapy trials/treatment if the patient is interested.

Following diagnosis, early management may include nutritional supplementation. There is limited evidence that vitamin A may reduce the rate of ERG loss. However, vitamin A toxicity can produce serious liver and kidney side effects. Notably, vitamin E supplementation accelerates loss of function.

Low-vision management is important for every stage of RP and is indicated for all patients with RP. Filters or tinted glasses may reduce problems related to transitions in lighting and glare sensitivity. Patients may also benefit from orientation and mobility (O&M) training, even if visual measurements are relatively good. Patients who admit to any trips, bumps, falls, or a fear of falling should be referred for this type of training. Patients may be trained on use of non-visual cues to facilitate navigation, a long white mobility cane, or perhaps with a guide dog after the patient has acquired basic O&M skills.

In RP, the vision is relatively preserved until the late stage, with the rods and then the cones affected. When the best-corrected visual acuity decreases, other causes associated with RP must be investigated, such as posterior subcapsular cataract and cystoid macular edema (CME). RP-associated CME is typically treated with carbonic anhydrase inhibitors. Oral acetazolamide is superior to topical dorzolamide for reducing edema and improving vision. However, the topical medication is often used instead to avoid the side effect profile associated with its oral counterpart. Treatment effectiveness is also limited by a rebound effect.

According to Gobeille, studies using optical coherence tomography (OCT) on patients with RP have found that the pattern of photoreceptor loss with eccentricity is consistent with field constriction. OCT is also an important tool to evaluate for RP-associated CME.

Supplemental audio strategies are often important for RP patients with advanced vision loss. Some examples of these include smartphone apps such as KNFB Reader (Sensotec) which can provide instant access to print; Voiceover or Talkback (built in speech output smartphone capabilities); and smarthome technologies (eg, Amazon Alexa), which may allow the patient to listen to news, search the Internet, and even control home lighting. This is often recommended in addition to the tinted lenses and mobility strategies mentioned previously.

Additionally, the Argus II retinal prosthesis (Second Sight Medical Products) provides electrical stimulation of the retina to induce visual perception for patients with bare light perception vision or worse and confirmed retinal function. Patients who receive an implant can expect improved ability to detect lights and movement, which Gobeille notes can be meaningful and of functional significance for a patient who would otherwise be blind.

Success with the Argus, Gobeille explained, is dependent on realistic patient expectations and adherence to training with the device.

Clinical trials are ongoing to investigate use of cortical implants for patients who are blind, and Second Sight’s Orion device is currently enrolling human subjects.

Gene therapies are another area of interest. Due to RP’s genetic heterogeneity, it is unlikely that any one gene therapy will cure RP. Gene therapies are also intended to prevent further vision loss and is not able to restore tissue that is already dead. Voretigene neparvovec (Luxturna, Spark Therapeutics) is the first such therapy, which is FDA approved for biallelic RPE65 mutation.

Cell therapies are another potential area of intervention. Early success has been achieved with stem-cell-derived RPE on a scaffold for AMD. Photoreceptor cell therapy is less advanced and faces greater challenges including cell differentiation, migration, synapse formation, and extension of outer segments toward the RPE.

“Clinicians should diagnose based on symptoms, clinical appearance, visual field, electrodiagnostic testing, and sometimes genetic testing, Gobeille concluded. “Monitor for progression with multimodal imaging. If visual acuity declines, rule out other etiologies. Low-vision management is critical in all stages of RP.”

Retinal prostheses and other innovations are increasingly available, but are unsuitable for certain RP patients. But most importantly, there is always something the clinician can do to help these patients.

This article is adapted from Gobeille’s presentation at the American Academy of Optometry 2021 annual meeting in Boston. She has no financial interest in this subject matter. 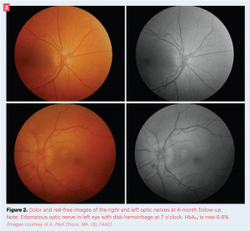 Optic disk swelling in an asymptomatic patient with diabetes 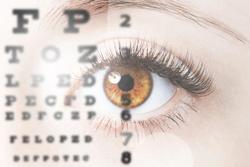 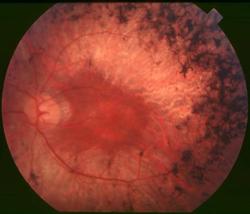