The wearable pupillometer weighs only 2.75 ounces and can hang on a pair of glasses. The device is worn in office for half an hour to monitor the patient’s pupils. It emits four colored lights to stimulate the pupil and a beam splitter attached to the device then filters the visible light that is reflected from the eye to the device’s camera, which processes the images to analyze the pupil’s size. By measuring 10 parameters associated with the pupil’s diameter and response time-five of which are significantly different in patient’s with diabetic autonomic neuropathy-doctors can then detect the earliest signs of the condition, which could lead to better outcomes, according to researchers.

Currently, diabetic autonomic neuropathy is often not detected until moderate nerve damage and organ dysfunction are present because doctors rely on changes in digestive speed, heart rate, and blood pressure to detect the condition.

According to researchers, if the clinical trials are successful, the pupillometer could be available within the next few years.

How ODs can address patients lost to follow up 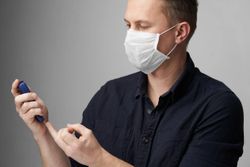