Blog: Why Hollenhorst plaques can be key to carotid disease diagnosis 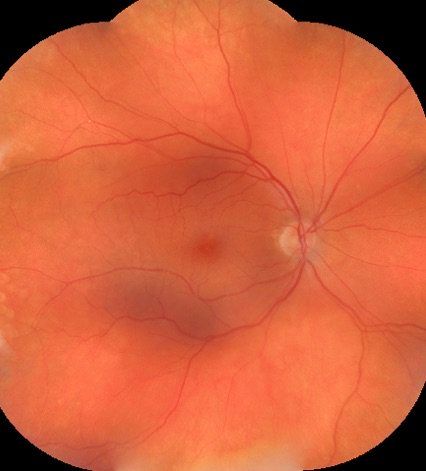 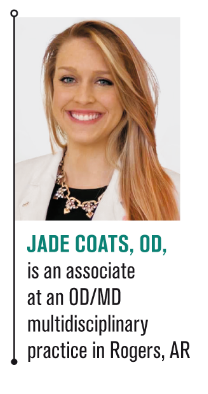 Cardiovascular events and heart disease make up the number-one cause of death in the United States. Stroke is the fifth most common cause of death in the U.S. with nearly 80 percent of all strokes caused by occlusion of a vessel secondary to embolus or atherothrombosis.1Previously by Dr. Coats: Blog: A case of demodex infestation with eyelash extensions

Case history
A 74-year-old male presented for his routine annual exam with no visual complaints. After monovision cataract surgery, he subjectively saw well at both distance and near, with a best corrected visual acuity of 20/20 at distance and near.

In his chief complaint, the patient mentioned a short episode that had occurred a few weeks prior in which he noticed a “pink tint” to his vision while playing golf. Other than that, however, he reported no other known visual disturbances.

The anterior segment was unremarkable other than mild dry eye disease. Upon dilated evaluation, a small resolving branch retinal vein occlusion (BRVO) was noted along the superior temporal artery in the mid-periphery of the right eye.

A shiny, almost prismatic, Hollenhorst plaque was found upstream to the BRVO at an adjacent artery bifurcation. Because this BRVO was not in the vicinity of the macular area, the patient was able to still see well and did not experience any decline in vision.

A second Hollenhorst plaque was also noted as a artery bifurcation along the superior temporal arcade (See Figure 1).

Now what?
Although having a carotid artery doppler is recommended within the first two weeks of noticing plaques, I tend to refer for an evaluation more urgently.

If the patient is exhibiting multiple new plaques or retinal occlusions, especially paired with previous subjective visual disturbances, I recommend within one week, if possible.

Because this patient had multiple newly documented emboli plaques, an occlusion in the same eye, and an increased in-office blood pressure (160/80), I decided to refer to his primary-care practitioner (PCP) for a blood workup including fasting blood glucose (FBS)/glycated hemoglobin (A1C), complete blood count (CBC), lipid profile, and an emphasis on the need for a carotid artery evaluation and ultrasonography.

Patients with these findings typically end up needing a full cardiac workup, as well as hypercoagulable testing such as antiphospholipid antibodies and homocysteine levels.

In this particular case, the patient was leaving four days later for vacation, so his PCP was able to get him in 72 hours after diagnosis. His blood work revealed increased high-density lipoprotein (HDL) cholesterol and increased triglycerides levels. The ultrasonography confirmed an ipsilateral carotid artery aneurysm, which required further computed tomography (CT) angiography to diagnose a 11.6 mm right fusiform aneurysm of the proximal right cervical internal carotid artery that required immediate treatment.

Due to the high association of ipsilateral carotid disease and the presumed potential for further cerebral or retinal emboli patients with symptomatic embolic disease, the patient was immediately prescribed a statin cholesterol medicine, an anticoagulant called (clopidogrel [Plavix], Bristol-Myers Squibb), and the antiplatelet acetylsalicylic acid (ASA).

Based on his carotid doppler results, the PCP also referred urgently to the cardiologist who is now closely following the patient to determine if further surgical intervention may be necessary.

At his one-month dilated eye exam follow-up, the BRVO was improving, and the two previously noted Hollenhorst plaques had passed and were no longer present. The patient’s blood pressure was also improved (130/70) after one month of oral treatment, without surgical intervention.

It is thought that ulcerated plaques distal to the bifurcation of the common carotid artery and split into external and internal branches. This may be a source of retinal emboli that can be asymptomatic or produce transient monocular blindness.1

The presence of cholesterol emboli in the retina is a clinical sign indicating heart disease that needs to be treated.

Cholesterol plaques are typically yellow, reflective, located at the carotid artery bifurcation, and tend to originate from the ipsilateral carotid artery or the aorta.1

Comparatively, calcific places are white, dull, larger, are usually closer to the optic disc, and tend to originate from calcifications of the heart valve.1

In reviewing this literature, it appears that the relationship between Hollenhorst plaques and carotid disease has been well established; however, the degree of this relationship has been difficult to track since it can occur in both asymptotic and symptoms patients.

Hollenhorst plaques, like other types of retinal emboli, may not stay in one place and may dislodge and move to a smaller diameter vessel before becoming lodged again, or the plaque may dissolve completely. Because of this, the presence of a Hollenhorst plaque during retinal examination is a confirming diagnosis. But the absence of a plaque does not rule out the possibility of future embolic occlusion.3Related: Vision loss could warn of cardiovascular event

Statistics
According to Robert Hollenhorst, MD-who performed original studies on these cholesterol plaques-patients who present with cholesterol emboli have a 15 percent mortality after one year, 29 percent by three years, and 54 percent by seven years.4

Cholesterol emboli are shown to be significantly more prevalent in men (67 percent) compared to women (33 percent).2 Patients with retinal cholesterol plaques had a higher incidence of stroke (8.5 percent with emboli vs 0.8 percent without).2

These results demonstrate that Hollenhorst plaques are a marker of carotid disease, regardless of the presence of retinal and visual symptoms in symptomatic and asymptotic patients. Therefore, all patients with emboli present should have a medical workup, including carotid ultrasonography.3Also by Dr. Coats: Blog: Recognize the signs of SND in your patients

Conclusion
Fortunately, there are now many nonsurgical treatment options a patient can try before needing surgical intervention. The discovery of asymptomatic emboli has a greater concern for a patient’s systemic health than visual health.

Because Hollenhorst plaques are key markers of carotid disease, it is important to properly identify the problem and quickly refer the patient for a medical workup, carotid auscultation, and carotid ultrasound (in asymptomatic and symptomatic patients).