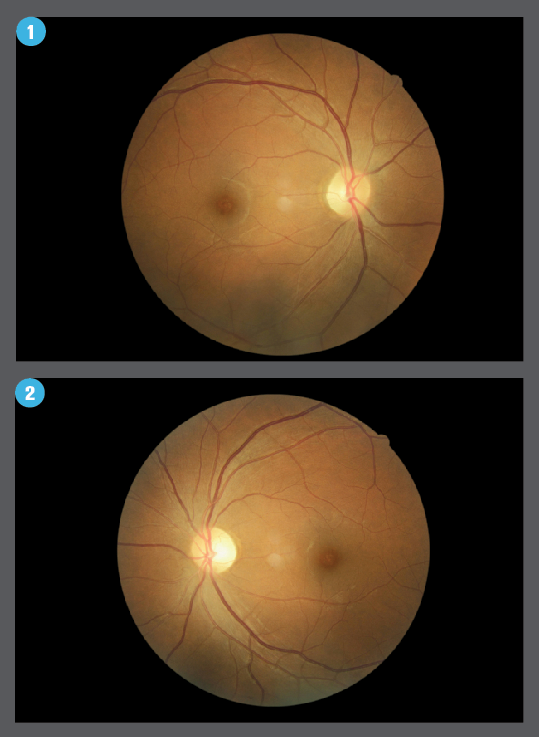 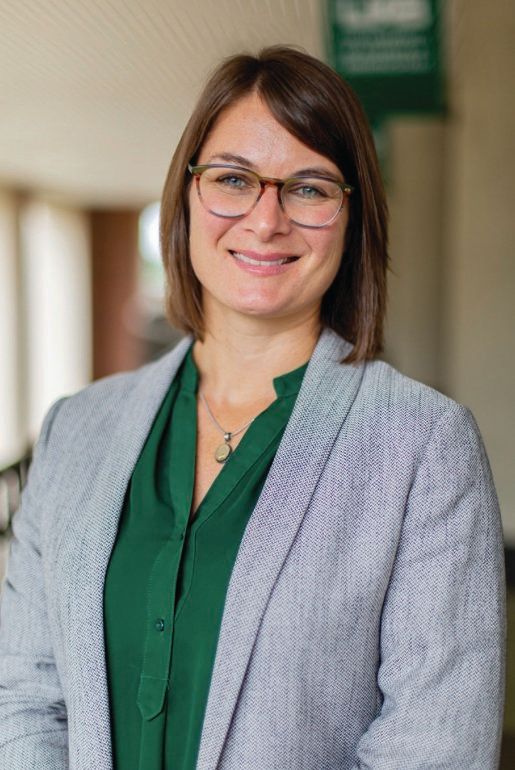 Elizabeth A. Steele, OD, FAAO is associate professor and associate dean for clinical affairs at University of Alabama Birmingham School of Optometry 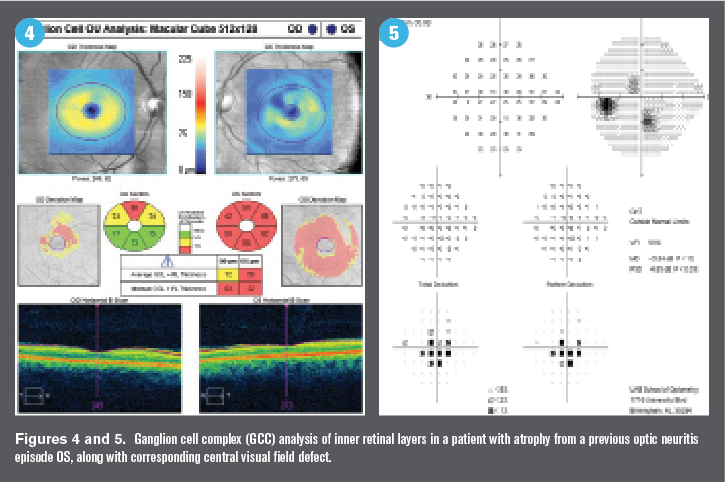 Figures 4 and 5: Ganglion cell complex analysis of inner retinal layers in a patient with atrophy from a previous optic neuritis episode OS, along with corresponding central visual field defect. 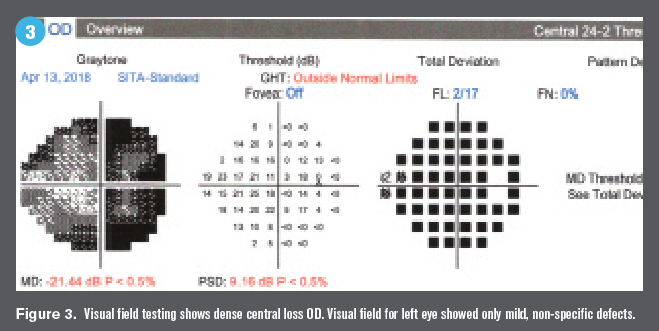 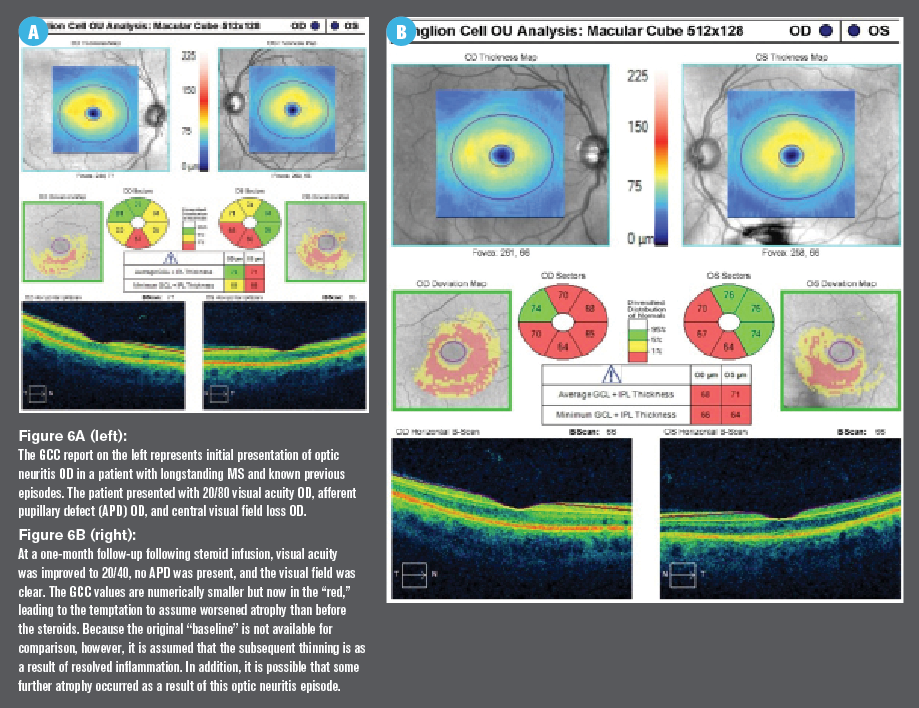 Optic neuritis is the presenting sign of MS in up to 30 percent of patients, so optometrists can play a vital role in initial diagnosis and effective treatment. High-resolution OCT aids both the diagnosis and management of optic neuritis. Although high-dose IV steroids are still the most widely accepted form of treatment for optic neuritis, numerous other avenues are showing promise.

Together with optometry’s expertise in examining the physical appearance of the prelaminar optic nerve, the technology at our fingertips-namely spectral domain optical coherence tomography (OCT)-positions ODs to play a pivotal role in the care of patients with multiple sclerosis (MS).

Related: Neurostimulation in the treatment of dry eye disease

It is well known based on autopsy studies and clinical examinations that most patients with MS suffer from optic neuritis at some point in their disease course.1-4 This sign of a neurologic condition can lead to a systemic diagnosis from the optometric exam chair and has been shown to aid in earlier diagnosis using OCT, in some cases without other physical evidence of optic neuritis.5,6

OCT and other examination tools can also be used throughout the careful management of this vision-threatening condition; as time and therapeutic interventions allow for regression of inflammation, the eyecare professional can watch for the return of visual function. And while neurologists are often well-read on the capabilities of OCT in MS management, they may not have the access or experience in image interpretation of ODs.

MS classification
MS is the most common disability in young adults, and its prevalence is increasing, particularly in some Asian countries.2 It is considered an autoimmune disease leading to central nervous system demyelination and subsequent symptoms of muscle weakness, fatigue, pain, and impaired coordination.

The severity, duration and rate of progression for a given patient vary and depend on which of the four the types of MS is present:7
• Relapsing-remitting is the most common, occurring in 85 percent of MS patients
• Secondary-progressive (which often progresses from relapsing-remitting) manifests with symptoms worsening over time, with or without relapses and remissions
• Primary-progressive is uncommon, occurring in 10 percent of patients, and symptoms slowly worsen over time without relapse/remission
• Progressive-relapsing is the most rare, occurring in only 5 percent of patients, and includes continuous progression with acute relapses and no remissions, often without recovery

Related: The neurology of glaucoma

MS and CME
As it turns out, treatment option fingolimod (Gilenya, Novartis) is associated with cystoid macular edema (CME), and therefore patients prescribed this treatment are recommended to have baseline OCT and close follow-up.

Fingolimod leads to CME in 0.5 percent of patients taking the lowest dose, with  an incidence of up to 20 percent in those more susceptible to compromise in the blood–retina barrier, such as patients with a history of uveitis or diabetes. The condition can occur unilaterally, or bilaterally, and may be asymptomatic. An OCT and dilated fundus exam are recommended initially and again every 4 weeks for the first 4 months of treatment.8

Earlier treatment of MS and subsequent optic neuritis may not only improve visual prognosis but also may be consistent with a higher quality of life and lower rates of systemic disability over time.3,4 The first year of systemic disease course has been found to be when most permanent damage occurs, highlighting the importance of an accurate diagnosis along with an appropriate and timely comanagement plan.

Optic neuritis is a general term describing inflammation of the optic nerve anywhere along its long path. The condition must be analyzed not just by its own characteristics gathered in the eye exam but also by accompanying systemic signs and symptoms. Most clinically isolated optic neuritis cases are eventually diagnosed with MS; however, other etiologies to initially consider must include infection, inflammation and vascular insult.9-11

Optic neuritis in MS can present with many faces, ranging from a severe to mild reduction in visual function and an optic nerve appearance that may or may not be indicative of pathology. The inflammation caused by demyelination typically occurs proximal to the optic nerve head within the retrobulbar portion of the nerve (hence the term retrobulbar optic neuritis).

While visual acuity may range from normal to moderately or severely reduced, visual function is more sensitively measured by threshold visual field and contrast sensitivity. Visual field loss is most commonly central, consistent with damage to the anterior visual pathway.

Related: A closer look at the retina in multiple sclerosis

Varying degrees of optic disc swelling and/or pallor may be present, with acute neuritis more likely associated with edema, and chronic, longstanding, and recurring neuritis more likely to be associated with pallor. In a recurrence, patients may demonstrate new edema, adjacent to older pallor, assuming the remaining tissue is viable enough to swell.

The old saying about retrobulbar optic neuritis, “The patient sees nothing, and the doctor sees nothing,” does not always hold true because the doctor and patient alike will often see more than “nothing.” In addition, most patients with acute optic neuritis will report eye pain, often more noticeable during eye movements.2,3

In both acute and chronic neuritis, an afferent pupillary defect is common. Visual evoked potential will likely show reduced amplitude and increased latency.12

OCT in diagnosis and management
High-resolution OCT is useful in both the diagnosis and the management of optic neuritis, as regression is sought after following treatment. Furthermore, OCT has been suggested to be predictive of disability secondary to MS, and indicative of quality of life, particularly in early MS without previous history of optic neuritis.5,6

Recalling that the inner retinal layers are in fact an extension of the central nervous system, ODs can deduce with reason that these tissues are vulnerable to damage in MS and other neurologic diseases. Episodes of acute optic neuritis will lead to swelling (manifesting as thickening on OCT), while longstanding optic neuritis or recurrences will lead to atrophy and therefore thinning. It is also common to see inner retinal thinning in MS patients who have no reported history of optic neuritis, possibly suggestive of a subclinical episode, retrograde degeneration, or retinal ganglion cell damage independent of optic neuritis.4-6

While there may be a tendency to focus on the optic nerve, the inner retinal layers around the optic nerve as well as in the macula must be evaluated. In contrast to the inner retina around the disc, which contains mostly retinal nerve fiber layer (RNFL) axons, one-third of the total macular volume is made up by ganglion cell layer (GCL) neurons. Given that the GCL is particularly susceptible to impact in MS, the macula will often bear the brunt. This correlates well with the typical central visual field defect (Figures 4 and 5).

Acute optic neuritis, on the other hand, is consistent with inner retinal thickening noted in the central ganglion cell complex (GCC) as well as in the peripapillary RNFL. However, unless the affected patient is experiencing optic neuritis for the first time in his life, it may not present as “abnormally” thick according to the instrument’s normative database. This is due to existing atrophy and therefore thinning from a previous episode, which  also means less cellular function and nerve fibers which do not as actively swell (Figure 6).

Optic neuritis which progresses to atrophy is differentiated from other conditions which can cause RNFL/GCC thinning (e.g., glaucoma) due to its dramatically fast rate of progression. It has been shown that, in less than three to six months, 10µm to 40 Î¼m of RNFL loss can occur.4-6

Related: The case of the blurred disc margins

Important differential
Neuromyelitis optica (NMO), previously thought to be a variant of MS, is also a demyelinating disease that can lead to optic neuritis. While NMO and disorders within its spectrum are much  rarer compared to MS, only accounting for 1 to 2 percent of demyelinating disease in the US, they have an equally negative outcome. NMO has a 5-year mortality rate of 20 percent, and patients with progressed disease are often blind or partially sighted, unable to walk, and suffer from respiratory failure.11

NMO manifests as acute transverse myelitis with a predilection for optic neuritis which may or may not manifest recurrent attacks. When optic neuritis presents, considering NMO with caution is important because the treatment is often very different than for patients with MS.

While optic neuritis secondary to MS generally responds to steroids (discussed  in more detail below), optic neuritis from NMO may require immunomodulators to prevent progression.14 When NMO is suspected, lab testing for the anti-aquaporin-4 (AQP4) or anti-myelin oligodendrocyte glycoprotein (MOG) antibodies are diagnostic.12,13

Imaging and other testing
Without a known diagnosis of MS or other cause of optic neuritis, MRI with fluid-attenuated inversion recovery (FLAIR) is preferred for detecting white matter lesions in demyelinating disease. Fat suppression can enhance the anterior optic nerve when there is acute optic neuritis without known cause.7

As many as 50 percent of patients at initial episode will show signs of MS with neurologic imaging.9-11 A more severe initial presentation of optic neuritis correlates with lesion load on MRI, as well as a worse visual prognosis.

Related: MS medication may be associated with macula edema

Treatment of acute optic neuritis
While the Optic Neuritis Treatment Trial remains the flagship study in the treatment of acute optic neuritis, clinical approaches based on its conclusions are not without debate.9-11,14,15 In the randomized study, a three-day course of intravenous (IV) methylprednisolone (250 mg q6 hours, followed by two weeks of daily oral prednisone at 1 mg/kg/day), was compared to both a 14-day course of oral prednisone at 1 mg/kg/day, and a 14-day course of placebo.

While high-dose IV steroids are still the most widely accepted form of treatment for optic neuritis, a variety of clinical approaches are used among neurologists and eyecare providers due to their questioned efficacy, practicality and long-term benefit.15

Treatment strategies are often influenced by the professional opinion and approach of the neurologist and/or eyecare provider and the particular needs of the individual patient. Given the controversy and inconvenience with IV steroids, alternative options are a popular topic of discussion and study.

Morrow and colleagues found that oral prednisone in a dose equivalent to the typical IV dose showed no significant differences in acuity, contrast sensitivity, or visual evoked potential (VEP) at both one and six months, for example.16

In addition, promising therapies focusing on immunosuppression, neuroprotection and remyelination are in Phase 2 and 3 trials, offering more targeted alternatives for the future.14

Related: Why are medications so expensive in the U.S.?

Conclusions
Diagnosing and managing patients with MS and other demyelinating disease creates a collaborating opportunity for optometrists with neurology and other healthcare providers. OCT instrumentation and interpretation is a standard aspect of care for MS patients and is optometry’s strong suit.

Furthermore, given the correlation between the severity of optic neuritis and its response to treatment with systemic disease activity, a strong relationship between communication and coordination of care will greatly benefit MS patients.

Read more by Dr. Steele: Know the latest on classifying and referring hypertension