New-onset, atypical retinopathy in a patient with diabetes

A diabetic patient presented with atypical retinopathy, likely resulting from the combination of idiopathic aplastic anemia and concomitant diabetes. Reduced Hb levels in this patient made accurate HbA1c analysis impossible, but an error message that arose in testing pointed to an underlying etiology of the patient’s symptoms.

A 72-year-old male with type two diabetes came to my office for a dilated retinal examination. He reported that his diabetes arose 10 years ago and that his HbA1c was “good” but he felt unusually tired the last several months and was having trouble catching his breath.  His previous eye exam from one year earlier, showed no diabetic retinopathy and mild nuclear sclerosis in each eye with best-corrected visual acuities of 20/20+.

His current medications included losartan, feonfibrate, and metformin and he noted a an internal medicine doctor’s diagnosis of diabetic peripheral neuropathy but no evidence of kidney dysfunction. Corrected acuities were again better than 20/20, with minimal refractive change. Both lenses showed early nuclear sclerosis and the irides were normal. Intraocular pressure measured 19/18 by applanation. A dilated fundus exam showed dot and blot hemorrhages in the posterior pole, which appeared far more numerous in the mid-peripheral retina with BIO exam. I did not detect retinal thickening with a fundus lens.

Related: Look at the retina in a different way

Given the fundus appearance and clinical history, moderate, non-proliferative, diabetic retinopathy as well as predominantly peripheral, diabetic retinopathy lesions (PPL), both risk factors for sight-threatening diabetic retinopathy, seemed probable. The white-centered hemorrhages, though, were less typical of diabetic retinopathy and careful review of previous fundus imaging showed no retinopathy whatsoever. Moreover, the HbA1c error message and self reported malaise/dypsnea made me suspect a hematologic disorder. I sent a report to the patient’s internist and asked him to return in eight weeks.

At the next follow-up, the patient reported he had been hospitalized twice in those eight weeks for severe anemia, receiving multiple transfusions and referral to hematology. His vision and retinas remained unchanged. He returned to my office the following week to tell me he had been diagnosed with aplastic anemia and was started on several new medications, including cyclosporine A and prednisone. Unfortunately, the patient died three weeks later from acute intracranial hemorrhage.

This case represents atypical retinopathy, likely resulting from the combination of idiopathic aplastic anemia in a patient with concomitant diabetes but no previous evidence of diabetic retinopathy. Reduced Hb levels in this patient made accurate HbA1c analysis impossible, but the assay error message pointed to the underlying etiology of the patient’s symptoms and signs.

One analysis showed that roughly 15 percent of patients with diabetic retinopathy (DR) had at least one white-centered intra-retinal hemorrhage; the white center represents accumulation of fibrin-platelet emboli extruded through damaged retinal capillaries, but it has also been associated with focal ischemia akin to cotton-wool spot formation 3. Roth spot formation has been correlated aplastic anemia 4.

Aplastic anemia refers to chronic, primary hematopoietic failure from injury leading to diminished or absent hematopoietic precursors in the bone marrow and attendant pancytopenia (pathologically diminished numbers of red and white blood cells, as well as platelets). Symptoms include weakness and shortness of breath from hypoxia, as well as infection and poor healing. Incidence is extremely low (0.6 to six cases per million) and requires bone marrow biopsy for definitive diagnosis.

Two-thirds of cases are idiopathic; the balance are attributed to hereditary (Fanconi) anemia, seronegative hepatitis and other viral infections including HIV, Epstein-Barr and cytomegalovirus, toxins (e.g. benzene exposure), telomerase defects that prevent maturation of hematopoietic stem cells, and some drugs, including chloramphenicol, carbamazepine, felbamate, phenytoin, quinine, and phenylbutazone 5,6 Common ocular findings include intra-retinal hemorrhage (24 percent) which increases with severity of the anemia (69 percent if Hb < 80g/L and platelets < 50x10-9/L) 7.

Related: Know the latest on classifying and referring hypertension

Treatment consists of blood transfusion and immunosuppressive therapies including cyclosporine A and prednisone, as well as bone marrow transplantation. Survival depends largely on age, disease severity, and response to initial therapy. Five-year survival is >75 percent for patients who undergo bone marrow transplant from a suitable donor. The majority of untreated patients die within one year from disease-related complications including bleeding, infection, or transformation to lymphoproliferative disorders including leukemia and lymphoma.

This case underscores the importance of considering alternate or coincident pathologies in patients with significant, new-onset, retinal findings, despite initial clinical impressions. 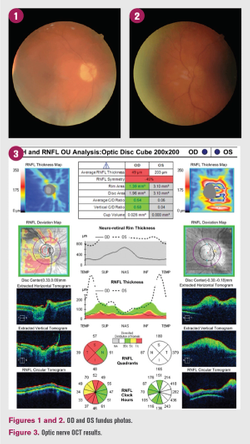