Patient horror stories can happen at any time of the year, but late October makes these tales particularly chilling.

The sun sets earlier, and the leaves are changing colors. Pumpkins appear on doorsteps, and spiderwebs adorn shrubbery.

Patient horror stories can happen at any time of the year, but late October makes these tales particularly chilling.

Step closer, gather round, and shudder as you read….

Check out our story from last year!

A 25-year-old with type 1 diabetes who was seven months pregnant came in for an emergency consultation with sudden vision loss in one eye. While recapping an insulin syringe pointed toward her face, she missed and perforated the cornea, resulting in a traumatic cataract with 20/400 vision.

My advice: Don't recap syringes or, at a minimum, point the business end away from your face!

Shortly after opening my new office, I had a nice older gentleman show up. When I clicked to start a new exam on my electronic medical record, I noticed the exam was #666.

It turns out the patient was a priest.

After a bit of discussion, we decided he didn't need to reschedule. True story.

I saw bilateral 360 subconjunctival hemorrhages that managed to burst through the conjunctiva, so blood was running down both cheeks. The patient was a senior citizen who had a fall. She also had bilateral lid contusions. There was a lot of chemosis, and I guess she must have rubbed the eyes enough to tear the conjunctiva so blood seeped out.

We once had a patient arrive during lunch when our doors are locked until 2:00 pm. At 1:59, he started violently kicking the door and screaming to let him in.

Needless to say, my staff was scared out of their wits to open the door, so they let him keep up his tantrum for a few minutes (which seemed like forever) until I finally had to open the door and confront him. Obviously, we fired him as a patient, and he never came  back.

A patient showed up 30 minutes late, and he was told he would be rescheduled.

He demanded to speak to the doctor.

“You will be seeing me today because doctors always run behind,” he told me.

My response: “I will gladly see you today if the two other patients in the waiting room will give up 15 minutes of their exam time to you.”

Unbelievably, he went over and asked a patient in her 70s to give up her exam time.

She said, “No, you may not have my time. Showing up late is disrespectful.”

Those two patients in the waiting room still see me 10 years later, and we still get a laugh.

Related: How patients perceive your practice

Years ago when I was new to practice and not very smart, I made the mistake of entering the exam room without glancing at the patient’s chart. So I walked in knowing nothing about him.

When I asked his occupation, he told me he ran the safety program at a local manufacturing plant.

He then asked me, “So, Doc, do you ever have trouble getting folks to wear their safety glasses?”

When I admitted that yes, that could be a challenge, he said, “Well, whenever I see one of the guys not wearing the safety glasses, I go up to them, stand real close, and do this (insert mental picture of the guy reaching up, removing his prosthetic eye, and holding it right up to my nose!) and then I tell them, “That's what could happen to you if you don't wear your safety glasses!"

I didn't scream even though it scared the hell out of me. I had never actually seen someone remove a prosthetic eye before-I guess I skipped that day in optometry school.

It taught me a valuable lesson about reviewing the chart before entering the exam room!

The flash from the Kowa fundus camera set a patient into an epileptic seizure. That was definitely our first!

Related: Marijuana’s role in optometry and beyond

A 40-something-year-old patient presents with blurry vision at distance x 2 weeks with onset after being stung by bees in the neck. The exam reveals very severe nonproliferative diabetic retinopathy OD and high-risk proliferative diabetic retinopathy with a complete circle of fibrosis around the macula (which had clinically significant macular edema) that screamed of impending retinal detachment.

After further probing, I learned that the bee stings prompted him to seek medical attention, at which type 2 diabetes was diagnosed and treatment was initiated. The vision screening at the physical is when the blurry vision was detected.

We educated husband and wife at nauseum about the findings and retinal referral, including the fact that he probably had been living with uncontrolled diabetes for 10 to 15 years-or more-in order to have such significant changes in his eyes. We told them the bee stings did not cause the vision loss and actually may have saved his life by forcing him to see a primary-care physician and then me.

We sympathized to his life-changing situation and educated him on his condition as best as we could, but he and his wife still seemed shocked and in denial about his recent diagnosis.

On the way out, his wife dejectedly said, “He was fine until the bees got him.”

I guess he got dia-bee-tes.

Related: Why communication is the key to diabetes success

A patient arrived with fingernails like this, and I had to teach her how to insert and remove her contact lenses. We found a way but watching her attempts at removal still haunts me 15 years later.

During my optometry school rotations, a 40ish white male presented with blurry vision. While doing unaided visual acuities, he is yelling the eye chart at me.

He was creeping me out.

I gave attending doctor the preliminary findings and asked if someone can come in the room with me. She said no.

I went out to my attending and said that I may fail the rotation but I’m not going back in there with him.

She didn’t believe his licking was intentional.

She went into the room to check behind me, and he licked her too!

We called security and wrote a report in his chart in case he sued us for missing something during the exam.

Related: 5 ways to fire a patient

I fit a foreign patient with a cosmetic contact lens. He had a large corneal scar from a knife wound. The lens looked great on the first try. The staff and I could not believe the positive result.

I asked him what he thought, and he unexpectedly responded with three famous words: “F!@# you, f!@#!”

OK, maybe that counts as two words, but I digress.

Then, I honestly thought he was going to get out of the chair and slug me. Thank God, my assistant was fluent in the language of his country. She got him to calm down and leave without punching my lights out. I still don’t know why he was so angry. 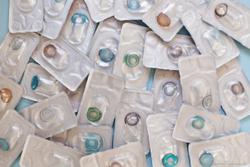 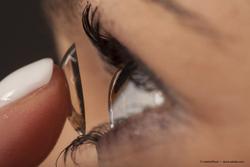 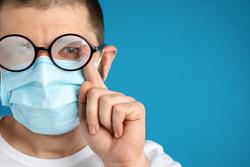