What we can learn from managing diabetic patients

Many diabetics neglect their eyecare due to not knowing and/or misunderstanding the effects of diabetes to the eyes and visual system. Much of the inadequacies in patient education can be attributed to the absence or insufficient communication among healthcare providers, including optometrists, and our patients. 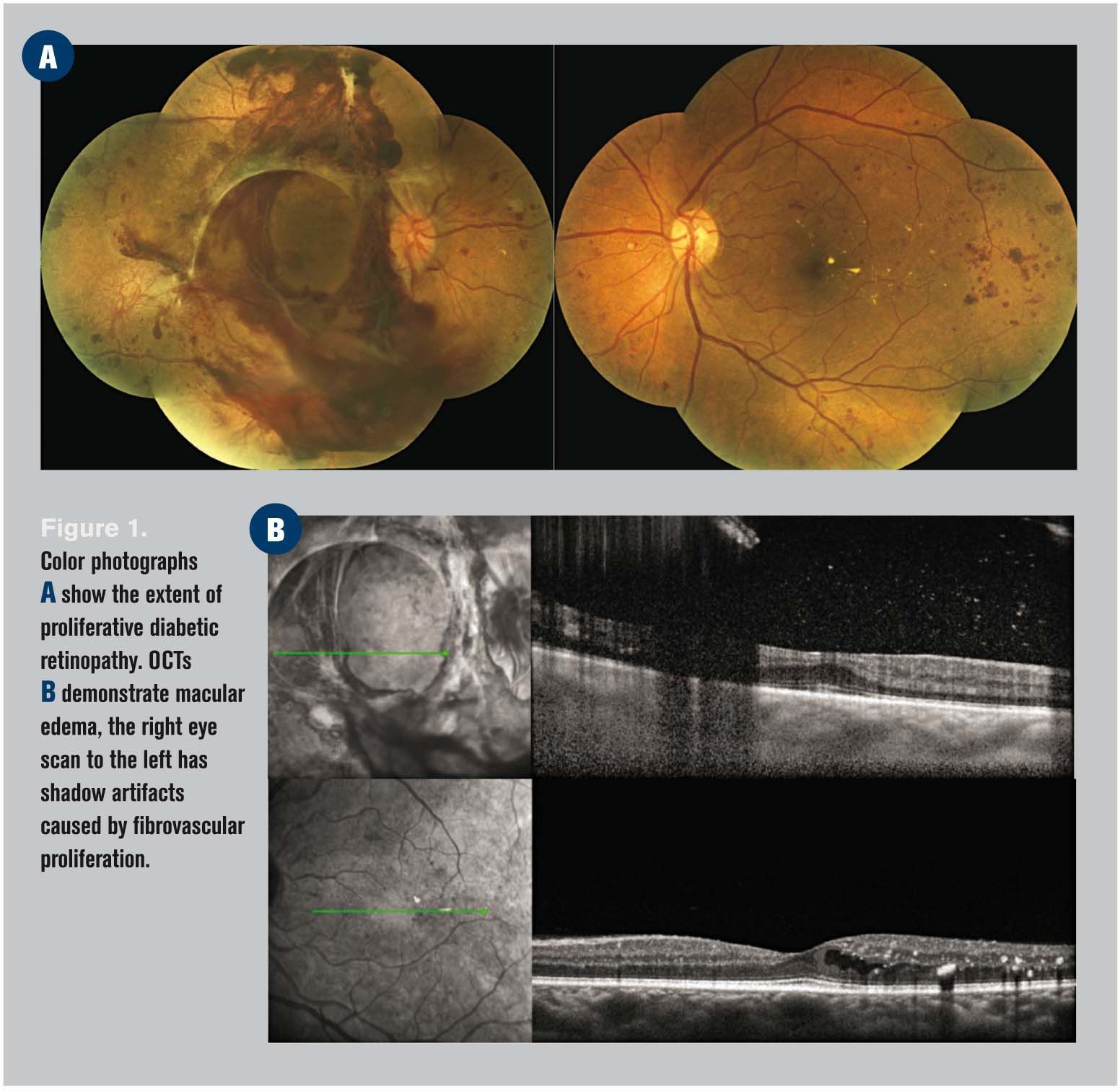 Many diabetics neglect their eyecare due to not knowing and/or misunderstanding the effects of diabetes to the eyes and visual system. Much of the inadequacies in patient education can be attributed to the absence or insufficient communication among healthcare providers, including optometrists, and our patients.

One misconception is our patients’ assessment of the possibility of having any significant eye disease-patients’ “meter stick” is usually their visual acuity and the absence of pain. Several years ago, I asked a diabetic patient with significant retinopathy if he was suffering any diabetic-related kidney disease.

He replied by saying that his kidneys functioned perfectly. I then asked if this was conveyed to him by his physician through any kidney function testing. He replied no, but went on to say that he knew his kidneys were perfect because he urinated without any difficulty.

It became clear to me at that time that our patients make the same assumptions about their eyes. If they see fine or have no eye pain, then they can’t be suffering from any eye disease. It is this conclusion that leads patients not to seek adequate eye care as well as their poor compliance with follow-up care even in the midst of treatment.

More from Dr. Rafieetary: A clinical perspective of neovascular glaucoma 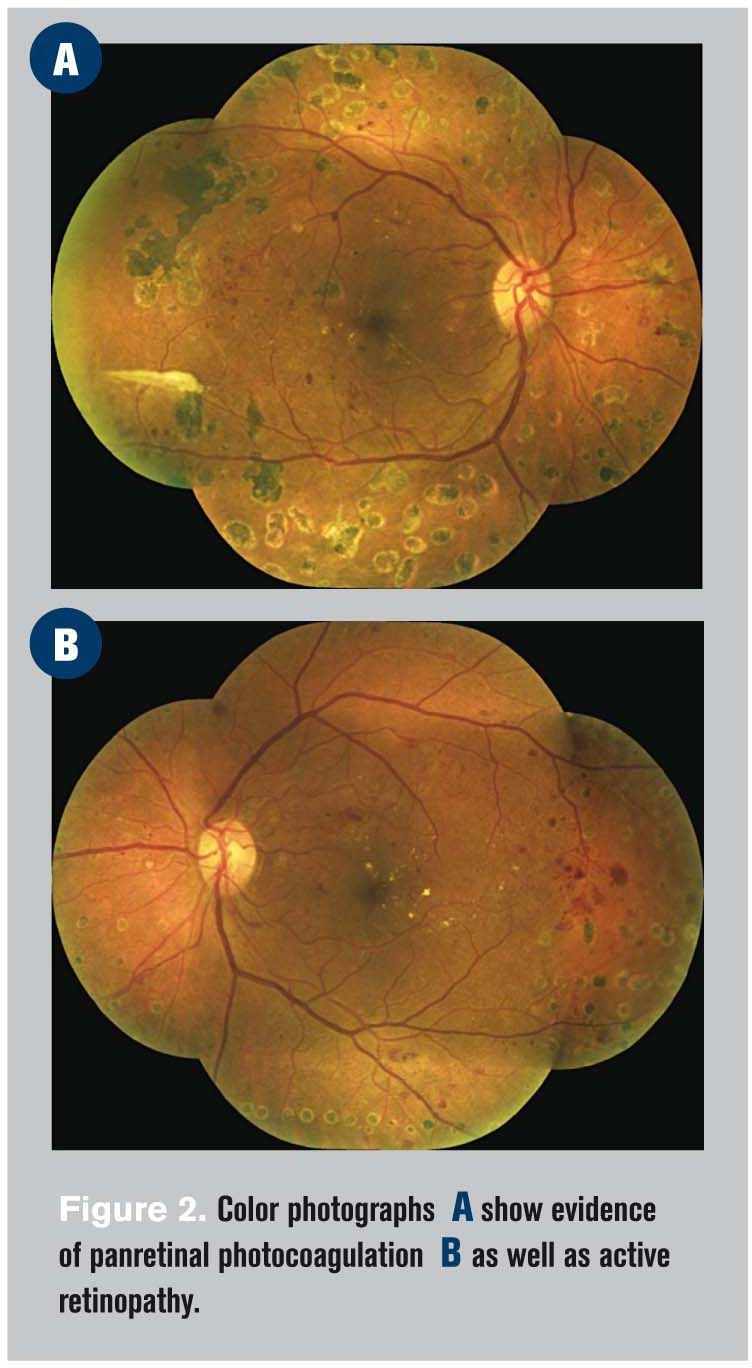 A 42-year-old African-American male was referred for possible retinal detachment OD. He had noticed floaters and some vision loss in his right eye for four days and claims no symptoms or problems in his left eye. He has been diagnosed with type 2 diabetes for less than a year and indicates good glucose control. His best corrected visual acuities were OD 20/60, OS 20/30.

His fundus exam and optical coherence tomography (OCT) (Figure 1) is remarkable for proliferative diabetic retinopathy and macular edema in both eyes, plus he has a large subhyaloid hemorrhage and extramacular tractional retinal detachment.

Subsequently the patient underwent a number of additional procedures for persistent neovascularization and macular edema seen on OCT and fluorescein angiography (Figure 3).

A number of lessons can learned from this case.

First, many type 2 diabetics suffer from the disease for periods longer than their actual diagnosis date.1 Therefore, there may not be a “grace period” between the time of diagnosis and presence of end-organ damage. These patients require close follow-up care initially until a level of stability in their findings is established.

Second, we must stress the fact that although the patient’s symptoms have sudden onset, the disease has been evolving for some time; therefore, there are no quick solutions and the patient should expect chronicity of care.

Lastly, a lesson for us practitioners to bear in mind: every drastic presentation like the one encountered here has begun by a single microaneurysm. It is incumbent upon us to make a lasting impression on our patients when we capture the disease in its initial stages.

By not pacifying the situation, the patient must be educated that potential devastation can be avoided by the proper care of the underlying condition and compliance with follow-up care. The result of neglect is blindness. 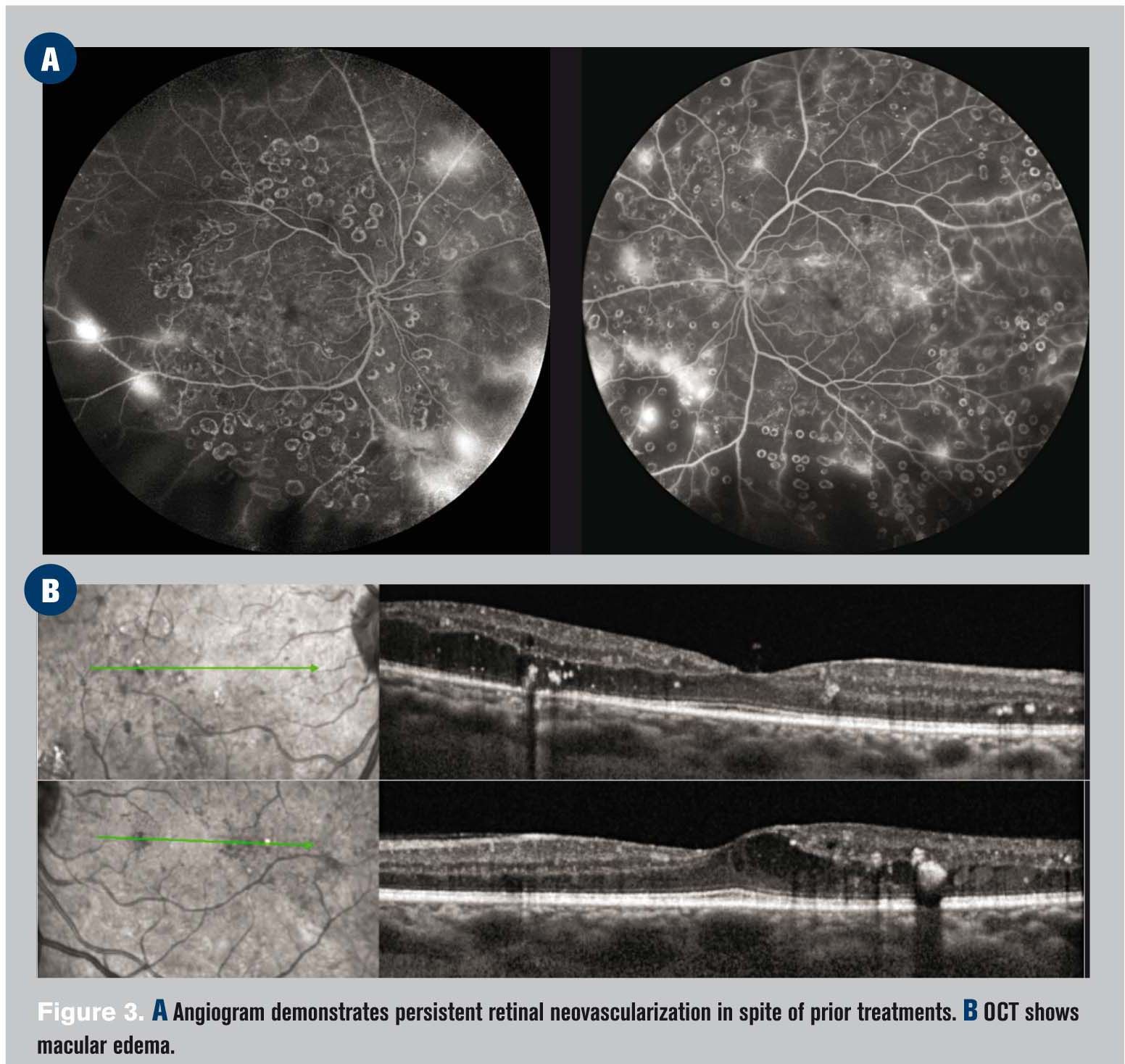 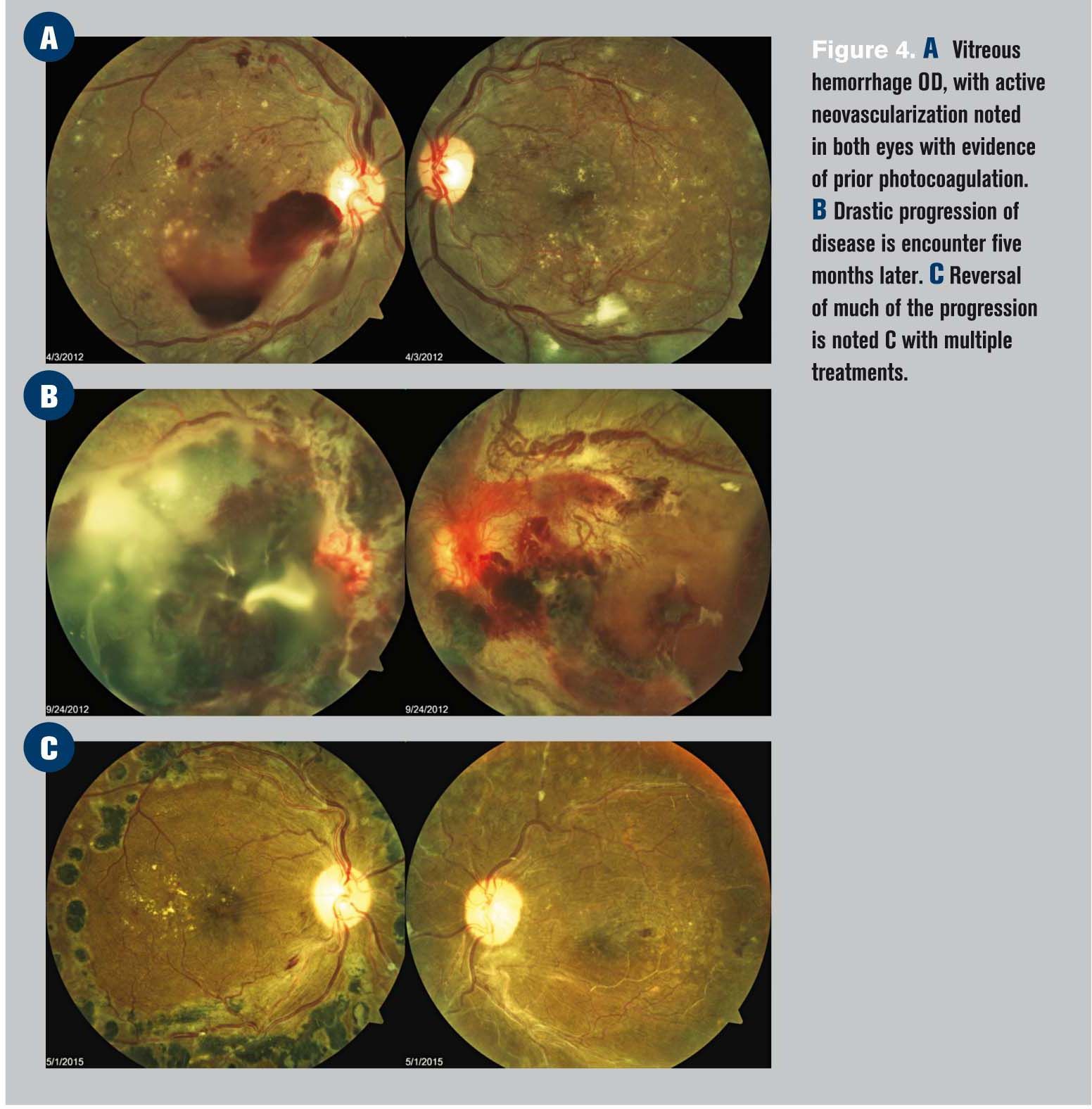 A 30-year-old African-American female presented with history of type 1 diabetes since the age of 10, along with renal complications and systemic hypertension for three years.

On the particular visit demonstrated in Figure 4A, her best-corrected visual acuities were OD 20/100, OS 20/60. This patient was experiencing progression of her proliferative retinopathy in spite of several treatments.

Subsequently, the patient failed to return for a follow-up appointment due to personal neglect as well as other mitigating factors such as undergoing other medical procedures. Five months later she returned with significant vision loss OU and significant progression of proliferative disease (Figure 4B). 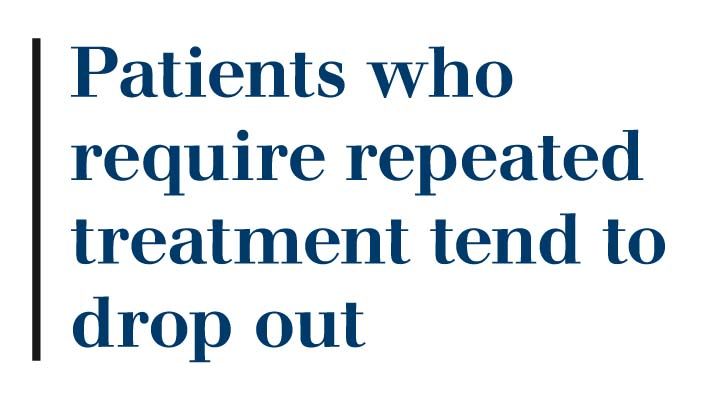 What are the lessons learned from this case example?

First, patients who require repeated treatment such as frequent anti-VEGF injections can easily become disenchanted and show tendency to drop out of treatment, resulting in severe consequences. I often use kidney dialysis as an example for patients to realize the necessity of the treatment frequency.

Second, understand the significance of co-existing disease such as hypertension, renal insufficiency, sleep apnea, as well as patient demographics such as obesity and smoking.

These comorbidities play a significant role in patients’ long-term outcomes. Our patient education must also include addressing the effects of all coexisting problems.

Third, persevere with treatment regimens of recalcitrant situations. This case demonstrates that even with the overwhelming setbacks, persistent management reversed what could have been a far worse scenario.

Lastly, in the case of patient’s left eye, we observe that in spite of all the efforts, the ischemic nature of the disease prevailed, resulting in a limited outcome. This is a testament that prevention is perhaps the best remedy to avoid a meager outcome.

Next: "Do I really need to keep my sugar down?"

A 56-year-old African-American male was referred for a diabetic retinal evaluation. The patient has a seven-year history of type 2 diabetes and a 10-year history of hypertension, with marginal control of both conditions. He has no visual complaints and exhibits 20/20 vision OU.

There are a few scattered microaneurysms (MAs) in both eyes. In the right eye, a cluster of MAs along the infratemporal vessels resulted in leakage with a ring of exudate encroaching the fovea (Figure 5). This area was treated with focal photocoagulation. In discussing the case with the patient, he questioned the rationality for good blood sugar control.

What did we learn from this case? It is known  that elevated serum glucose mechanically damages the endothelial cell lining of microvasculature.2-4 Furthermore, it has been demonstrated that both high serum glucose as well as hypoxia play crucial roles in upregulation VEGF, which in turn can result in vascular permeability and leakage as well as vascular proliferation.5-6

Irrespective of available effective treatment strategies against specific complications of diabetic retinopathy-namely, macular edema, neovascularization of the retina and/or the iris and tractional retinal detachment-there is no treatment against the loss of blood flow (ischemia), which plays a significant role in the development of the above-mentioned complications as well as permanent sight loss.10-11

Therefore, by advocating good glycemic control, many patients can avoid progression to the high levels of severity as demonstrated in the first two cases. 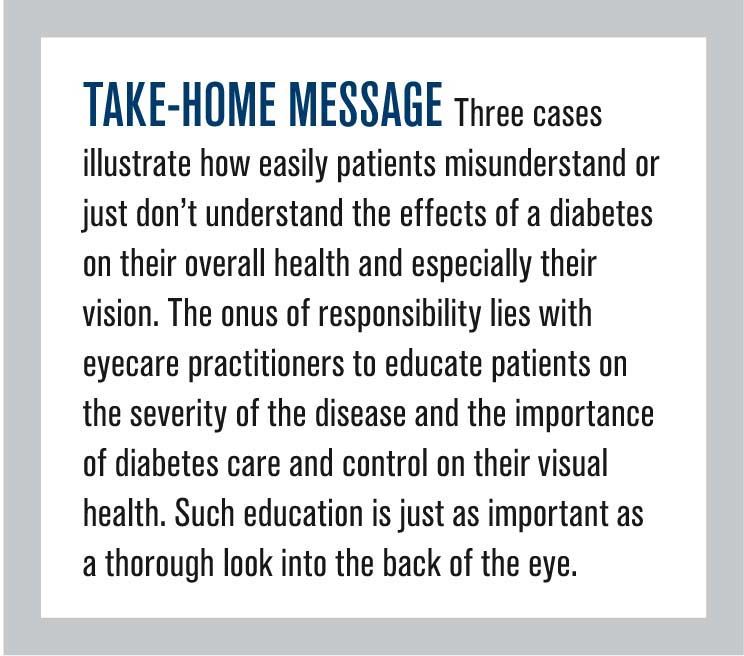 Second, some patients assume that, if they do a better job at blood sugar control, the need for any further follow-up or treatment is eliminated.

We need to make patients understand that once retinopathy begins, it takes a life of its own. In particular mild and moderate cases, there are vascular bundles that remain unaffected, while others are in various stages of disease (Figure 5C).

Good control of blood sugar will improve the chance of survivability of the unaffected vessels and slow down the rate and severity of the progression of those in disease state.

However, due to the unpredictable and chronic nature and of diabetic retinopathy, the need for follow-up care is paramount to ensure a good long-term outcome.

In conclusion, patient education as well as careful examination of patients with diabetes can drastically improve patient visual welfare and potentially remove diabetic retinopathy form the list of “most common cause of blindness” in the U.S. and the world.

7. The Diabetes Control and Complications Trial Research Group. (1993). The effect of intensive treatment of diabetes on the development and progression of long-term complications in insulin-dependent diabetes mellitus. N Engl J Med. 1993 Sep 30;329(14):977-86.