Mike Brown, OD, MHS-CL, FAAO, shares how the significance of a pocket watch and Helen Keller serve as important lessons in patient care for ODs.

John Hitz, Jr. could see just fine when he ordered a custom pocket watch from a Swiss watchmaker in 1865, but he wanted to be able to tell time like a blind man.

Hitz, a Swiss-born diplomat who, like his father before him, served as his native country’s consul general to the United States, needed to be able to check the time during high-level meetings without pulling his watch from his pocket.

Doing so at the wrong moment might offend some president or potentate and leave the impression that Hitz was bored and “watching the clock” for a chance to end the meeting early— or perhaps not listening at all.

The delivered product was a delight to the eyes and typical of the storied tradition of Swiss-watchmaking artisanship that continues to this day: an ivory dial, with large, black Roman numerals marking hours standing like pillars supporting smaller, Arabic ones indicating minutes; slender “spade” hour and minute hands; a small, but still highly legible sub-dial at 6 o’clock accessorized with a seconds hand; an 18-karat gold case topped with an oversized and elegant pendant, ribbed crown and arching bow enabling easy manual winding of the intricate mechanical movement housed inside (see Figure 1).

However, what makes this watch so unique is the clever “complication” on its case. In timepiece lingo, a complication is any function other than the display of the time on the dial, or watch “face.”

The case is studded around its edge with pins that correspond with the hours on the dial. An ornate—but easy to use—mounted hand on the case back can be moved by one’s fingertips until it stops at a point in between the pins that corresponds to the hour and approximate minute of the time shown on the front (Figure 2). This unique feature enabled Hitz to reach into his pocket and determine the time by feel and not by sight. 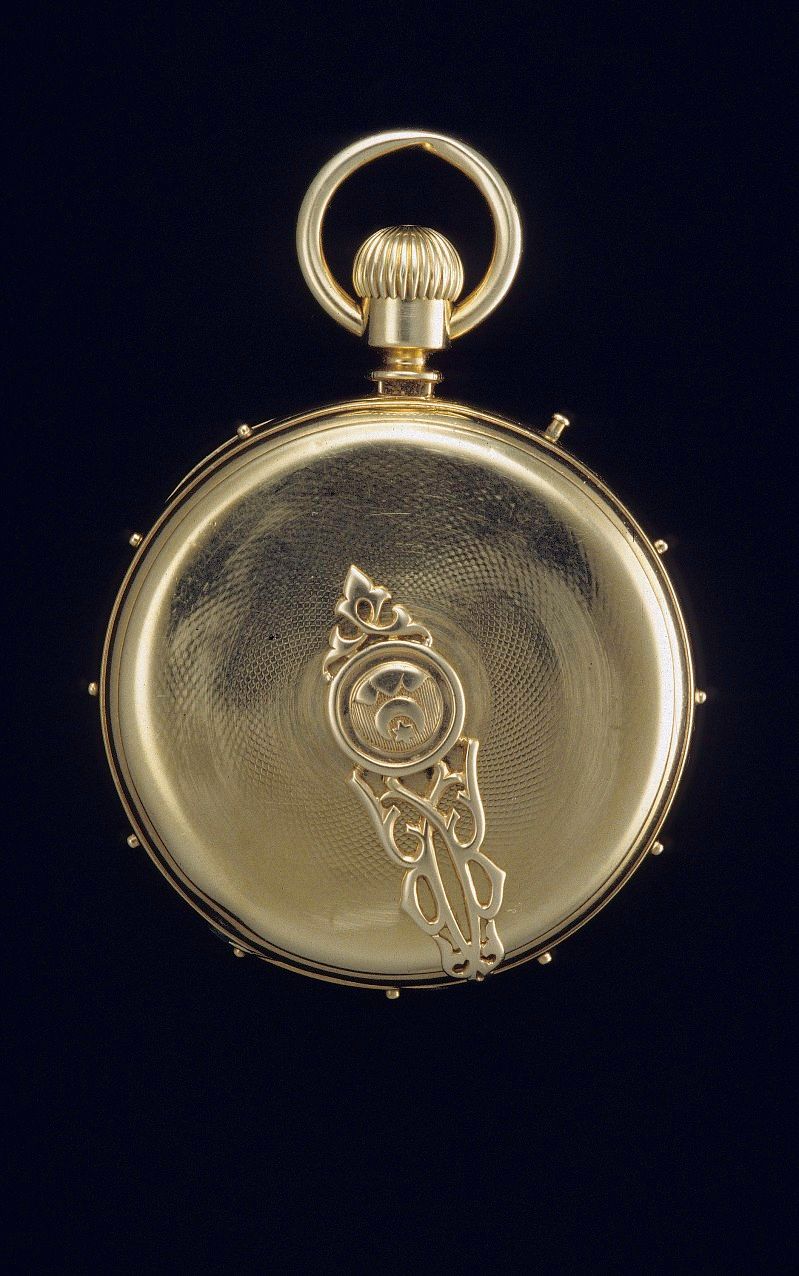 It was the perfect tool watch for a discreet diplomat. At the time, Hitz probably did not realize that he owned a forerunner of the kind of “touch watches” that would eventually be widely used by the visually impaired. It would take meeting an amazing woman to make that connection.

After his diplomatic career ended, Hitz met Alexander Graham Bell and became an administrator for Bell’s Volta Bureau—an organization committed to deafness research and providing resources for the hearing-impaired—which still exists today as the Alexander Graham Bell Association for the Deaf and Hard of Hearing.

In 1892, Bell introduced Hitz to Helen Keller, then 12 years old. Keller would later become the famous writer, social activist, suffragist, and advocate for the vision and hearing-impaired whose story became most widely told through her autobiography, The Story of My Life, and the 1962 movie based on it, The Miracle Worker.

An acute illness had left Keller deaf and blind when she was 19 months old, but by the time she and Hitz met, Keller was making great strides toward learning to read, write, and speak with the help of her teachers at the Perkins School for the Blind in Boston.

Her most famous tutor was Anne Sullivan. The Perkins School's administrator dispatched Sullivan to Keller's hometown of Tuscumbia, Alabama to assess and assist the angry and unruly young girl who burned so badly to be heard, she developed over 60 "home signs" to communicate with her family.

It was there that Keller had her breakthrough moment, learning to understand the connection between objects and words when she realized the cool, flowing liquid Sullivan poured over her hands was linked with “w-a-t-e-r.”

From that epiphany, she went on to graduate from Radcliffe College and become a beloved public figure who traveled around the world, charming and educating influential public figures, advocating for the disabled, and pursuing other social justice causes.

In their 1892 meeting, Hitz was impressed with Keller’s resilience and persistence. Recognizing a prime opportunity to do the right thing, Hitz gifted Keller with his bespoke pocket watch. It was the beginning of a lifelong friendship and correspondence. Keller cherished the watch, and she reportedly became proficient enough in its use to tell time to within a minute by touch alone.

In 1952, Keller was riding in a taxi in New York City and accidently left the watch behind when she reached her destination. Local radio stations, newspapers, and volunteers launched an all-out search for the missing watch. Keller feared the watch was gone forever.

However, a sharp-eyed pawnbroker—who had taken it upon himself to search for the watch among the hundreds of shops around the city—found it, and, like Hitz, did the right thing by reuniting the timepiece with its “rightful owner.”

Nicholas Manousos, executive director of the Horological Society of New York, recently said that hand-crafted, mechanical watches are “an engineering lesson, inside a history lesson, inside a beautiful painting.”

In other words, fine watches are intricate and exquisite instruments that tell not only the time but also important stories.

I spy at least 2 important lessons from the story of Helen Keller’s special watch that are relevant to optometry.

First, we optometrists, like Hitz, need to have our eyes “up and out,” looking for “prime opportunities” to help our blind and visually impaired patients who need—and deserve—state-of-the-art low vision care, technology, and rehabilitation.

It is all too easy in our busy practices to fall short in this critical area. Visually impaired patients do not see well, and they also often feel unseen. Even if we do not provide low vision services and devices ourselves, it is high time we follow our oaths as doctors and refer to optometrists or other vision rehabilitation specialists who do.

Second, and closely related to the first, we should be like the honest pawnbroker who listened to the whispers of his better angels and traveled the streets of New York City to find what was lost.

By traveling “the extra mile,” we can help our visually impaired and blind patients maximize their potential for productive, happy lives, and recover an important measure of dignity and independence.

Hitz, Keller, and the honest pawnbroker teach us that doing the right thing does not have to be that “complicated.”

Michael Brown, OD, MHS-CL, FAAO, has practiced optometry over 30 years in a variety of practice settings, including OD/MD, corporate, the U.S. Department of Veterans Affairs, and ocular telehealth.