A 12-year-old male patient presented to the clinic with complaints of central scotomas in each eye, worse in the right than the left. He and a friend had been playing with a laser pointer, and he experienced multiple bouts of laser light directed into his eyes for 20 to 30 seconds over the course of a few hours. The laser pointer was 650 nm and had a power output of less than 100 mW.

The patient is not taking medications and is in good health. Ocular history is positive for myopia, and he wears soft contact lenses; however, he did not wear his contact lenses to the examination. His family history is noncontributory. His uncorrected visual acuity was 20/80- OD and 20/80- OS. Pinhole visual acuity was 20/60-2 OD and 20/50+2 OS. Amsler grid confirmed central defects OU.

Upon examination, we noted a central yellowish lesion with irregular borders in both eyes. OCT scans show an area of hyper-reflectance from the retinal pigment epithelium (RPE) to the outer plexiform layer OU. No obvious cysts or pigment epithelial detachments are noted. Based on the thorough history, exam, and OCT findings, the patient was given a diagnosis of laser pointer maculopathy of both eyes.

Laser pointers are ubiquitous and because of this, injuries related to this device are not uncommon. Laser stands for light amplification by stimulated emission of radiation; this means the light emitted by laser devices is usually monochromatic, has equal energy and phase, and can be highly focused (minimally divergent).1 Because of their high focus, lasers can apply high amounts of energy to a very small area.2 Lasers applied to the human body can have mechanical, thermal, and photochemical effects on tissues and cells, and hence can be of therapeutic value. However, when used inappropriately, they can cause damage to said cells and tissues.2

Laser pointer retinopathy has similar effects on the retina as those caused by solar retinopathy. Melanin within the retina, specifically the RPE, is highly susceptible to thermal damage.2 Heat from the laser is absorbed by the RPE quicker than it can release it, leading to damage.2 Lasers can also cause photochemical damage, specifically in the photoreceptor layer. Photochemical damage is caused by laser pulses, leading to breakdown of the molecular bonds of proteins and nucleic acids.2 Clinically, eye care practitioners see a yellowish lesion and RPE changes shortly after exposure.5,6 OCT scans show subretinal and RPE irregularity as well as cystic spaces, and hyper- and hypo-reflectivity in the photoreceptor layer.5,6 Patients often report decreased visual acuity, central scotomas, and metamorphopsia.5,6

The prognosis in most cases is quite good because many patients report reduction—and in some cases complete resolution—of their symptoms over the course of weeks to months; however, long-term complications such as subretinal and intraretinal hemorrhages, subretinal neovascularization, epiretinal membranes, and macular holes have been reported.7

No agreed-upon guidelines exist, and treatment in most cases is just observation.2,7,8 Reports of treatment with oral steroids in animal models have been published, but the results are mixed.2,7 Another area of interest is antioxidants because photochemical damage often results in free-radical formation. High-dose antioxidants may play a role in maculopathy but warrant further study.8

Back to our patient

The offending laser in this case was likely a class 3a laser, and luckily it was of longer wavelength (650 nm). We had a thorough discussion with the patient and his mother and decided on observation. He was scheduled to return in 3 to 4 weeks, given an Amsler grid, and instructed to return to clinic as soon as possible should he notice any worsening.

Upon follow-up, he reported significant improvement in the size and density of central scotomas as well as improvement in his visual acuity. He was 20/20- in each eye, and we noted the return of foveal reflexes and resolution of the hypopigmented lesions. OCT scans showed improvement to the outer segments OU and macular contour OU. We recommended he continue the Amsler grid testing and follow-up every 6 months. We reviewed the long-term implications of laser damage to the retina and emphasized continued care.

In this case, the patient was lucky that there did not appear to be permanent damage to the outer segments of his retina. In cases with more severe damage, OCT scans often show focal loss of photoreceptor and RPE and absence of the PIL. 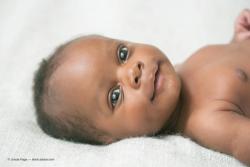 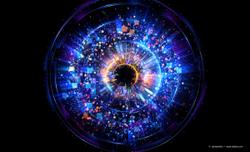