Treat what you see. I can’t remember from whom I learned that phrase, but a recent case really drove the point home for me.

A 31-year-old African male presented complaining of eye pain in his left eye for several days’ duration. He also stated that he had developed a headache right around that eye one day prior to his visit. He stated no vision change in either eye.

His medical history was remarkable for systemic hypertension, which was reportedly well controlled with a pill the name of which he was unsure. He has not lived in the United States for very long, and he reported being blind in his right, fellow eye for several years due to an infection related to contact lens wear when he was still living in Africa. His family history was noncontributory.

He presented wearing glasses with a low myopic prescription. Entering corrected visual acuities were 20/100 in the right eye and 20/25 in the left. Pupil testing was unremarkable, as was confrontation visual field assessment. Extraocular muscle testing showed full ranges of motion in each eye with no pain upon eye movements.

His conjunctiva was quiet in the right eye and had trace to Grade 1 injection in the left. The patient’s right cornea showed a central round stromal scar presumably from a previous corneal ulcer. The remainder of his right eye’s anterior segment was unremarkable.

Specifically, his right anterior chamber was deep and quiet. The patient’s left cornea was remarkable for a small, faint round scar inferiorly as well as an area of small white keratic precipitates centrally (see Figure 1). The anterior chamber in that eye was remarkable for Grade 1 cells, which were moving well. There were no defects on the anterior lens capsule in either eye.

The patient’s angles were open to Grade 4 on von Herrick assessment. Gonioscopy also showed open angles, with each angle open to the ciliary body with flat iris approaches, mild trabecular meshwork pigment, and no blood or other obstructions in either eye.

Dilated posterior segment examination showed healthy retinas which were intact. There were no vascular abnormalities, and both optic nerve heads were intact and well perfused. Both vitreous humors were attached and quiet.

After considerable thought, I diagnosed this patient with Posner-Schlossman syndrome, also known by its arguably more sinister name, glaucomatocyclitic crisis. He stated no pulmonary diseases or conditions or difficulty breathing. His pulse was 74 beats per minute and had a regular rhythm.

I had a sample of Combigan (brimonidine tartrate/timolol maleate, Allergan) and instilled one drop in his left eye. He returned an hour and a half later as instructed, and his IOP in that eye had decreased to 24 mm Hg.

I informed the patient of his condition and prescribed timolol maleate 0.5% ophthalmic solution to be used once in the morning as well as prednisolone acetate ophthalmic suspension to be used every 2 hours while awake in the left eye. I invited him back the following morning for a follow-up examination.

The next morning, he reported good compliance with both of his drops and reported feeling better.

Distance visual acuity in the right eye was unchanged and was 20/20 in the left eye. Both conjunctivae were quiet. The cells in the left anterior chamber were still present but better and graded as trace. The keratic precipitates on the left cornea were unchanged.

IOPs by means of Goldmann applanation tonometry were 14 mm Hg in the right and 10 mm Hg in the left. I instructed him to stay on the same regimen with his drops and to return for follow-up care in 3 days.

At that time, the right eye was essentially unchanged. The left eye was still 20/20 corrected at distance. IOP in the mid-morning was 8 mm Hg in that eye, both anterior chambers were quiet, and the keratic precipitates on the left cornea were almost resolved completely.

At that point, I instructed the patient to continue the timolol maleate every morning and tapered the prednisolone acetate to 4 times a day.

I had the patient discontinue the timolol maleate and began further tapering the prednisolone acetate. A follow-up visit in another week was pending at the time I authored this manuscript.

Posner-Schlossman syndrome, also known as glaucomatocyclitic crisis, is an uncommon, unilateral, and often recurrent condition in which a patient is subject to high IOP along with mild nongranulomatous anterior uveitis.1 As such, small to medium fine keratic precipitates are also common.

Since it was first described,2 there has been much debate about the exact cause of this condition. More recently, there has been considerable evidence for a viral cause, with one study finding over 50% of study participants with Posner-Schlossman syndrome to have cytomegalovirus (CMV) in their aqueous humors as detected by means of polymerase chain reaction.3

Having not seen a case of this condition since my resident days at the hospital in Brooklyn (coupled with the fact that this particular presentation was in the patient’s good eye), I had to stop and think for an extended moment before wrapping my head around proper management.

I took extra time in performing gonioscopy in order to ensure I hadn’t overlooked any obstructions. I was happy that this patient was relatively straightforward to treat and is doing well, and I appreciated the opportunity to revisit this uncommon and potentially damaging clinical ocular condition. 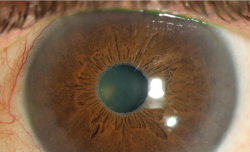