Q&A: OD research, the future of dry eye, being a wild man 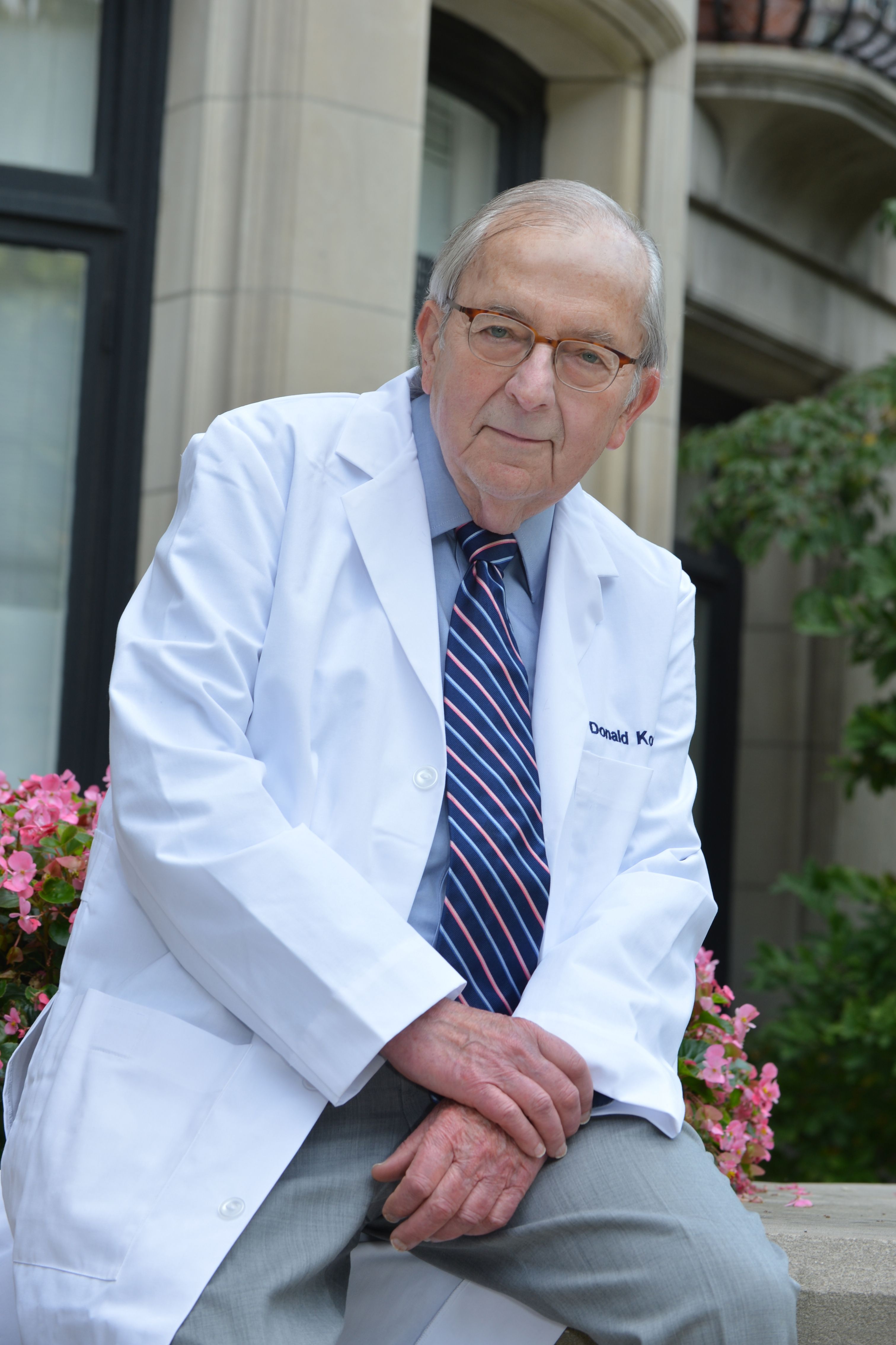 Where did you grow up?
I grew up in Boston. My father was a physician and an academic, and my mother was a voice teacher and a person who rehabilitated voices.

How did you get involved in optometry research?
Ever since I was a child, I was always interested in the “why” of everything, which made me very annoying. I came across a book by Spinoza when I was 9 or 10. That had a great influence on me. It made me understand that you had to make a living. And no matter what you do, do it well, and so that you enjoy it. When I became an OD, I had ideas on how to solve patient problems; one was to better map the cornea. I discovered we could take maps of the cornea with infrared film. So I went to the Polaroid Corporation attempted to make a position for myself. Shortly thereafter I was head of ocular, oral, and dental photography. I was out of school only 24 months. That changed my life because I got to see the research of this genius, Edward Land. That experience is still with me.

Why don’t more ODs conduct research?
Our society today is geared toward immediate gratification. It’s easy to ask questions of a colleague on the internet or via text. The question you ask may require hours of research on the part of the person who is attempting to respond. But we don’t think about that because that’s not our culture. If you want to do good research in today’s world, you cannot have a big ego.

When should researchers take their work into the commercial sector?
They may not have a choice. Many are forced to take in investors and venture capitalists, and they make those decisions. Philosophically, any invention that can help people should be brought into the commercial field after adequate testing to be certain that it will do no harm and that it’s efficacious. It must be good or have the potential to be good for society. As an example, almost all eye medications in use today have a preservative. The alternative is worse: infections and losing eyes. But now there are efforts to bring out containers with special features that eliminate preservatives. But it takes a long time for someone to observe there is a significant problem and have the intellectual curiosity to proceed. No one is going to spend millions of dollars on projects which have no return today.

Related: Optometry must change with the times

How do you balance time for patients and research?
There are two pillars you have to accept. The first is the probability that you won’t have the income you would have if you didn’t do research. The second is that you will be working more than the standard 40-hour week. You’re going to be working 60, 70, 80, 90 hours. For years, I averaged 80+ hours a week. You need a support team and a family that understands that. Be sure that what time you do have is spent very effectively with your family, or it will never happen. The days of doing significant research and seeing patients, even half time, are pretty well over. It’s because everything much more complex, it takes so much longer. And we have to go much faster. But it’s still all great. It’s still all wonderful.

What keeps you in private practice?
If a person comes in and says, “My eyes tear so badly. I can’t go outside. If I have air conditioning on or the defroster blowing in my face, it’s terrible. I can barely drive.” When you hear it from the patient, it brings an entirely different dimension than having someone else do the work, writing up a beautiful paper, and presenting it to you. You have no idea of the magnitude. We have to get motivated, we have to be believers ourselves that there is a problem if we are gong to solve it. So that’s why I do it. I enjoy it, and I enjoy helping people.

What is on the horizon for dry eye?
There will be a lot of products which will be ineffective. They are based on a model which doesn’t pay tribute to the root causes of dry eye. If individuals design the best possible formulations to suppress inflammation, you’d think that would do it. But inflammation is a sequela, not a root cause. There will be multiple failures and financial successes, but they will not provide long-term relief to the majority of people because they don’t address the root cause. There are a limited number of root causes: immune, special, locational, and the big cause today for the majority of dry eye is the electronic device world we’re living in which inhibits blinking. This whole electronic age coming about has wreaked havoc on maintaining the appropriate tear film on the eye.

Related: How to address the three aspects of dry eye disease

What's something that your colleagues don't know about you?
As a youth, I was a wild man. I don’t think many colleagues would believe that I was attempting to become a water ski jumper at which I was not successful. For a period of 10 or 15 years, I mentored African-American children. I had some great successes and I had some failures. One of the great successes I had was the object of a Pulitzer prize book called A Hope in the Unseen. His name is Cedric Jennings. I’m very proud of what I contributed with him, and I’m very glad for him. And I love the water, and I sail.

What's you guilty pleasure food?
Greek yogurt. I can go extended periods of time without eating-a day or two days. It doesn’t bother me at all. Once I eat anything, I find it difficult to stop eating. According to anthropologists, that means I come from a certain part of Europe where nine or ten months a year there would be nothing to eat from the ground. They were hunters-you wait until someone killed an animal, then you would gorge yourself because you didn’t know when the next meal was coming. My wife is just the opposite. She has to eat every three to four hours; not much, just a little bit. Anthropologists say that is a clear indication that they’re berry pickers. [Laughs]

Related: Q&A: A variety of pets, master's in nutrition, peanut butter, and jujitsu

Do you have any regrets?
If I had one regret, it would be that I was brought up in a house that did not place financial success as something that should even be considered. In retrospect, I don’t think that’s correct. When you look at the opportunities that money will allow, the people who work with you are entitled to far more than they can be paid. I think if you had unlimited money, you could fund your own research and not be looking for money all the time. So, having resources, you can do so much. That might well be the price I paid being brought up in a household was just not to say that money was important as long as you had what you needed at the time. That was wonderful.

How should optometry move forward?
Optometry has, in the past 10 years, shouldered its responsibility to be a primary eyecare profession and to provide care that is outside of the surgical culture. We have evolved into this electronic age. Visual function is more and more important, and we have to maintain that. There are only so many things you can do well. So optometry will have to develop different specialties but again, someone has to pay for all of this. How is it going to be funded? How it going to break down? I don’t have the answer for any of that. If we look out 20 years from now, despite the insurance problems, despite the payment, despite everything, the field will have to evolve to do what’s right for society. Ultimately, that always happens; it’s just a question of how long it takes and what the impediments are. But I really think that has to happen.

Related: How artificial intelligence is changing the future of optometry

What would you like your legacy to optometry to be?
I don’t think that way. Legacies are mainly ego, and I learned a long time ago that that’s a bad question. So, you have to ask, What do you really want? The only thing you should really want is that whatever you did provided some help for society when you did it and hopefully a basis for others to obsolete what you did. That is what I would want.

What's the craziest thing you've ever done?
Have the audacity that I could solve problems that have never been solved. A crazy act is something which has an unreasonably low probability of success and could be catastrophic to the individual. When did I recognize that this was crazy? I never did. [Laughs ] To me, my passion just overruled. The worst thing about research,for me is when you’re successful, the excitement is gone. I border on depression because it’s all over, it’s done.