Q&A: Retiring from the Academy, flipping thinking, taekwondo, and tequila 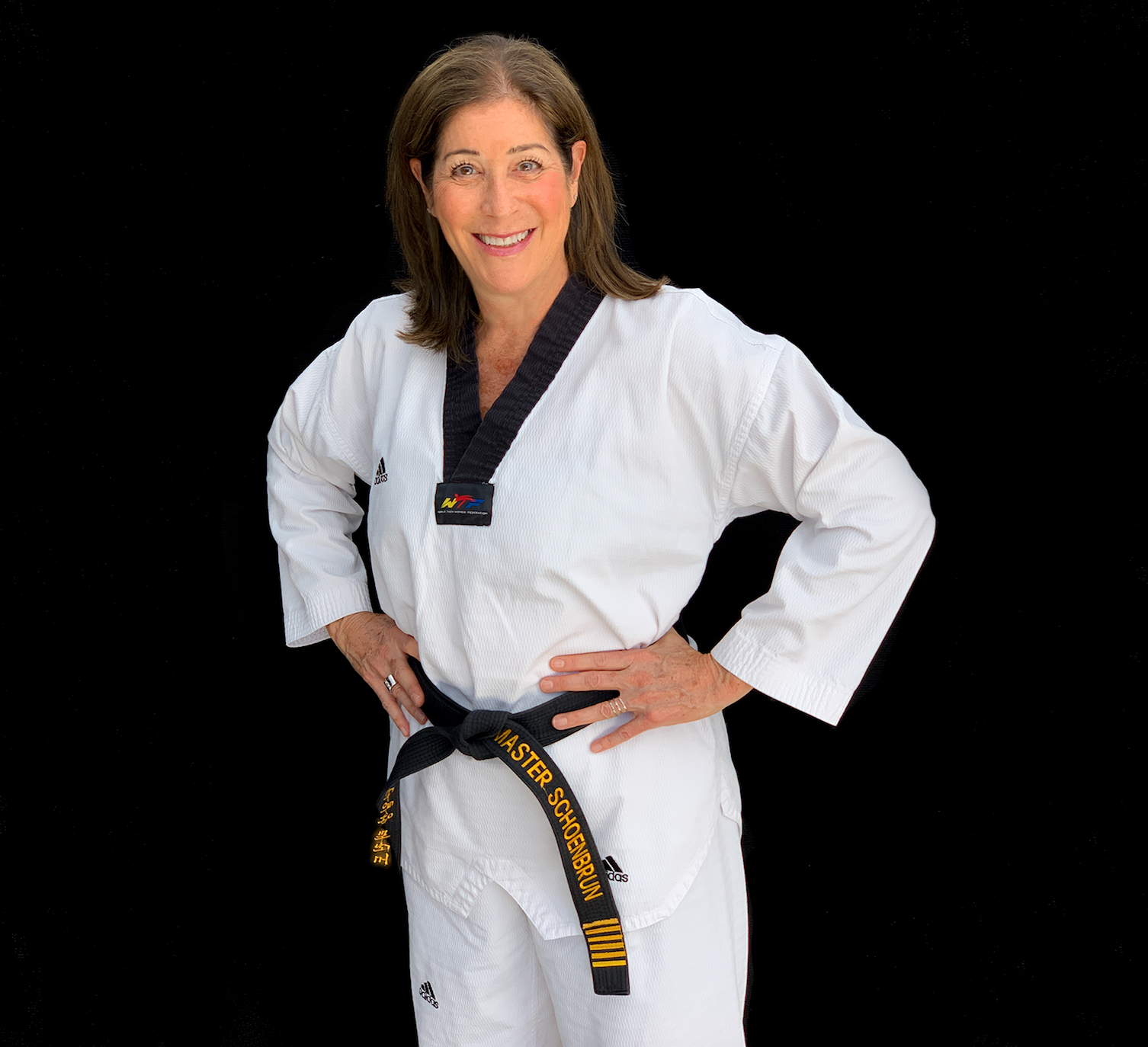 Meet Lois Schoenbrun, FAAO, executive director of the American Academy of Optometry.Where did you grow up?
I grew up in Maryland outside of Washington, DC, so I call myself a DC girl because if I say Maryland, people think Baltimore. My dad sold carpeting, and Mom worked for the National Institutes of Health in the institute that ultimately became the National Eye Institute (NEI). I have always been interested in health care.

I worked in healthcare organizations; I was deputy director of the American Medical Women’s Association with women physicians and medical students. Then the Academy position came open, and I am the granddaughter of a mail-order optometrist and the niece of a Pennsylvania College of Optometry (PCO) graduate.

When this position came open I said, “I’ve got to apply for that.” I think I got the first interview because I wrote, “I grew up climbing in and out of that great big chair.”

So, it was time to put my money where my mouth was. I got to the final interview, and two hours in I thought, “I may not have this job, but I really like these people.” I stayed because I really like the people. Our members are smart and fun, they do what’s right, they’re dedicated to lifelong learning. Life isn’t always a bed of roses, but I feel like often I am the envy of my association management colleagues.

Related: Q&A: Art gallery and beer in the office, no office phone, and reggae music

What prompted you to earn your fellowship in the Academy?
A belief in what this organization does and a desire to support it. I came in through the “special” category. The special category is for people who are not doctors, not researchers, who make particular contributions to the field. It was remarkable to me right from the start that not just the Academy but optometry in general has a phenomenal penetration of volunteers.

We and the American Optometric Association (AOA), Association of Schools and Colleges of Optometry (ASCO), and National Board of Examiners in Optometry (NBEO), optometrists volunteer their time for this profession that they love unlike other organizations, unlike other professions. I wrote my paper on volunteerism in optometry because it really is remarkable.

Why did you start taekwando?
My son was four and wanted to be a ninja turtle. Mommy, Mommy! Karate! [Laughs] I asked around if anyone knew of a good karate school. One friend said, “You have one the best martial arts schools on the East Coast five minutes from your house.”

I had grown up walking past the door and never noticed it. He took the first class, he was thrilled, and he wanted to commit. I asked the instructor if I could take this with him. So, for the first six months, I was Miss Lois in a little kids’ class, never knowing whether it would stick.

You never know with kids what’s going to stick. In so many ways, he was way better than Mama.  Little kids are fearless, their memories are better. There were many times that he’d have to remind me what the next move was or help me do something.

It’s phenomenal exercise, constantly forcing your body to do new things. It’s my meditation. When I get to the dojang, which is the martial arts studio, the rest of the world goes away. I think we need that in life.

What keeps you involved with taekwondo at a high level?
I continue to learn from my students almost every day. I leave a class and I say, “What did I learn today?” I learned very quickly that I do enjoy teaching, especially adults, some of whom think they are too old or too inflexible or too out of shape because martial arts can take you from whereever you are and improve your life.

Following in my Grand Master’s footsteps, I became an international referee. I was able to travel the world a bit and meet amazing athletes, referee friends, and coaches from around the world.

Since I moved to Orlando, I was not training regularly and really missed it. In the last year and a half or so, I’ve gone back to coaching and teaching more, and I just love it. I miss it when I’m not doing it.

What’s something else that your colleagues don’t know about you?
Those who work most closely with me know that I have multiple sclerosis and was diagnosed in 1977. I am incredibly lucky, but it’s one of the reason why I stayed with taekwondo as long as I did.

I believe that constantly forcing my body to do new things has helped modulate my MS. I’m retiring-ish at the end of April. I don’t know what the future holds; I’ll probably do some consulting. I enjoy raising money, and I enjoy helping other people learn to raise money and enjoy it.

What’s next for you?
I have a need to do more to help people directly. I think we live in a pretty ugly time right now, particularly for women, not just in this country, not just because of our political situation, but around the world. I’m sure it’s always been this bad, but there is a greater awareness and people are more familiar. I feel like there is more I need to do for people, for women.

Why retire now from the Academy?
It’s time. Twenty-two years is a long time. I’m tired. I’m older than most people think I am. [Laughs] It’s time for new adventures. At the annual meeting last year in San Antonio, it was amazing. The Academy, the Academy board, and staff showed their appreciation for my contributions in many ways, and I really did feel the love.

One of the most important things to me was that people talked about not just what I’ve done for the Academy or the profession but how I helped to build an infrastructure that allows them to be better doctors. That makes me feel so good. I had no idea that people felt that way. I need that kind of feeling a little more often and more directly.

What is the one achievement for optometry that you’re most proud of?
I think it’s big picture. When I was hired, I was told the Academy doesn’t want to grow, we’re elite. I kept saying, “Prestigious,” and they were, “No, we’re elite.”

We did not have significant student involvement. Our annual meeting was stable but in an association if you don’t grow, you die. We were able to flip that thinking to recognize that there are tens of thousands of optometrists practicing that are Academy caliber and should be Academy Fellows. And to flip that sense among students that the Academy is part of their professional futures.

I think flipping that thinking was the most significant thing we could do. It has fueled our growth of membership and the nominal growth of our annual meeting, and it got our board thinking bigger. To facilitate thinking big has just been an honor.

Do you have any regrets?
I wish I had put more balance into working with the American Academy of Optometry Foundation and helped drive that. The potential of the Foundation is enormous.

We still don’t have the kind of penetration within Academy fellows let alone outside the Academy within the larger profession to understand what it does and the importance to provide funding for research for the betterment of the profession.

What do you like to binge watch?
I just finished binge-watching all of the old episodes of The West Wing because-startlingly-the issues haven’t changed very much. But it was smart and caring government, and I really needed that.

What's your guilty pleasure food?
[Laughs] Peanut butter. Mangoes. And if I get through the day without having an orange! Florida oranges are amazing. I love a good tequila, and I love turning people onto good tequila. I think tequila gets a really bad rap. People get drunk, they do a shot of tequila, and then they blame the tequila.

What’s the craziest thing you’ve ever done?
I went to Ohio State for the first half of my college education. Back before the new stadium was built long ago, I spent a crazy night in the pole vault pit.

I don’t know how pole vaulters train now, but it used to be that they would jump off a very high platform into a massive pit of sponges.A bunch of us got in there one night and practiced jumping and falling, and we woke up there the next morning. I’m positive it had to be someone else’s idea.