Individuals often have questions about their candidacy for certain implants and how the various mechanisms of action work.

Astronomers and photographers have understood the proven physiologic principle of small aperture optics for centuries. When applied to a camera, the lens aperture or f-stop adjusts the amount of light that reaches the film or image sensor.

As the aperture reduces, image clarity across an increasing range of distances improves. For example, when taking a picture, everything from close in the field of view and everything in between is going to be clear. Whereas, if you have a fixed focus or a larger aperture, the lens is set is in focus but everything behind and in front of the object is out of focus (Figure 1). 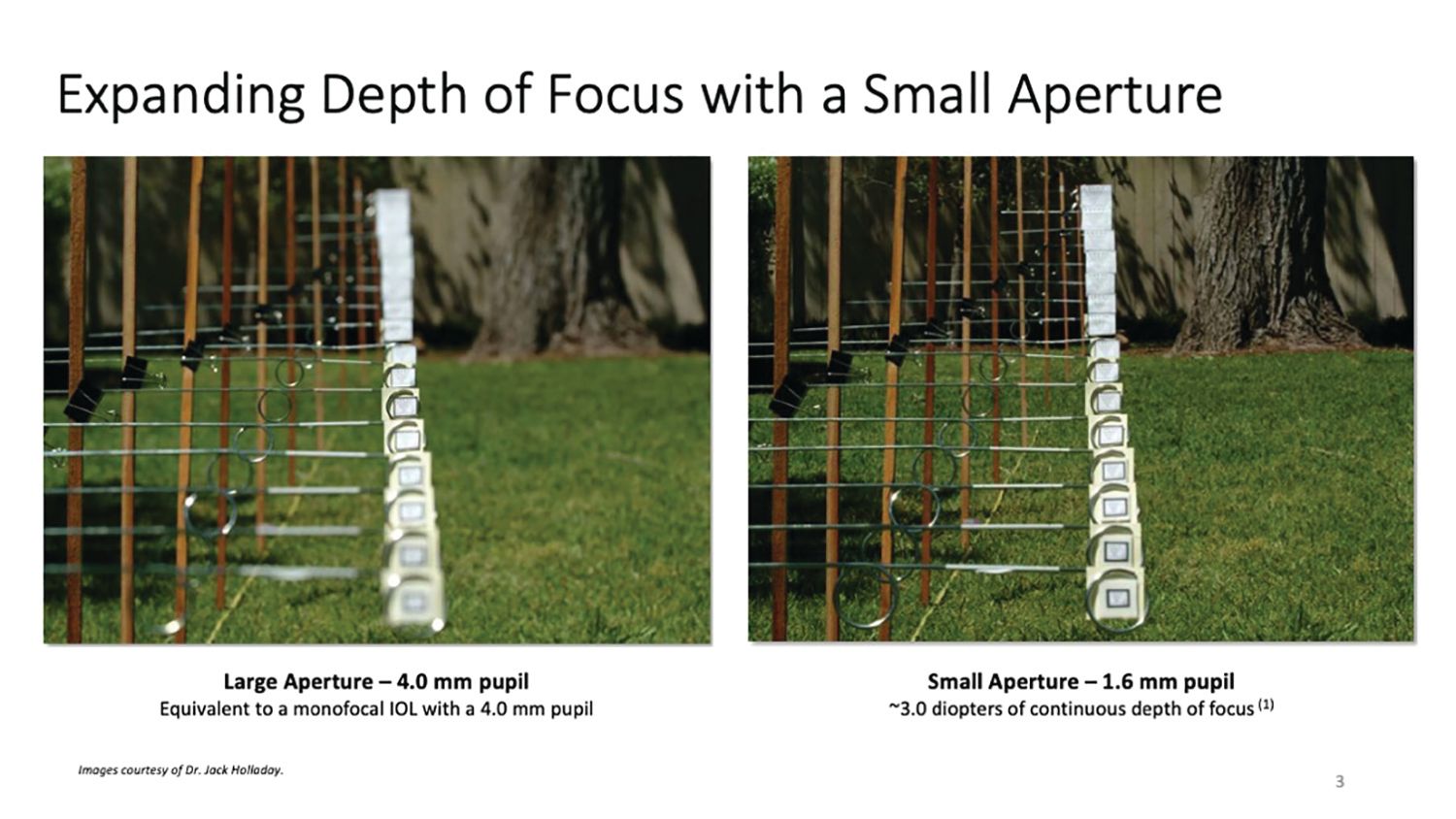 By the 1940s, eye care began finding uses for the small aperture, but only now has the powerful principle been incorporated into a presbyopia-correcting intraocular lens (IOL). FDA approval of the IC-8 Apthera IOL (AcuFocus) represents the first such small aperture IOL technology cleared for use in the United States.

The Apthera lens is an aspheric monofocal IOL with an embedded small aperture, referred to as the FilterRing component (Figure 2). This unique design filters out peripheral defocused and aberrated light and allows central focused light to reach the retina undisturbed, thereby delivering extended depth of focus.

The Apthera IOL is meant to be implanted contralaterally, with a monofocal or monofocal toric IOL in the fellow eye. The eye receiving the Apthera lens is targeted for –0.75 diopters (D), leaving the eye slightly myopic, and the other eye has an emmetropic target. This mini-monovision target further enhances the patient’s range of vision beyond the baseline range provided by the small aperture. 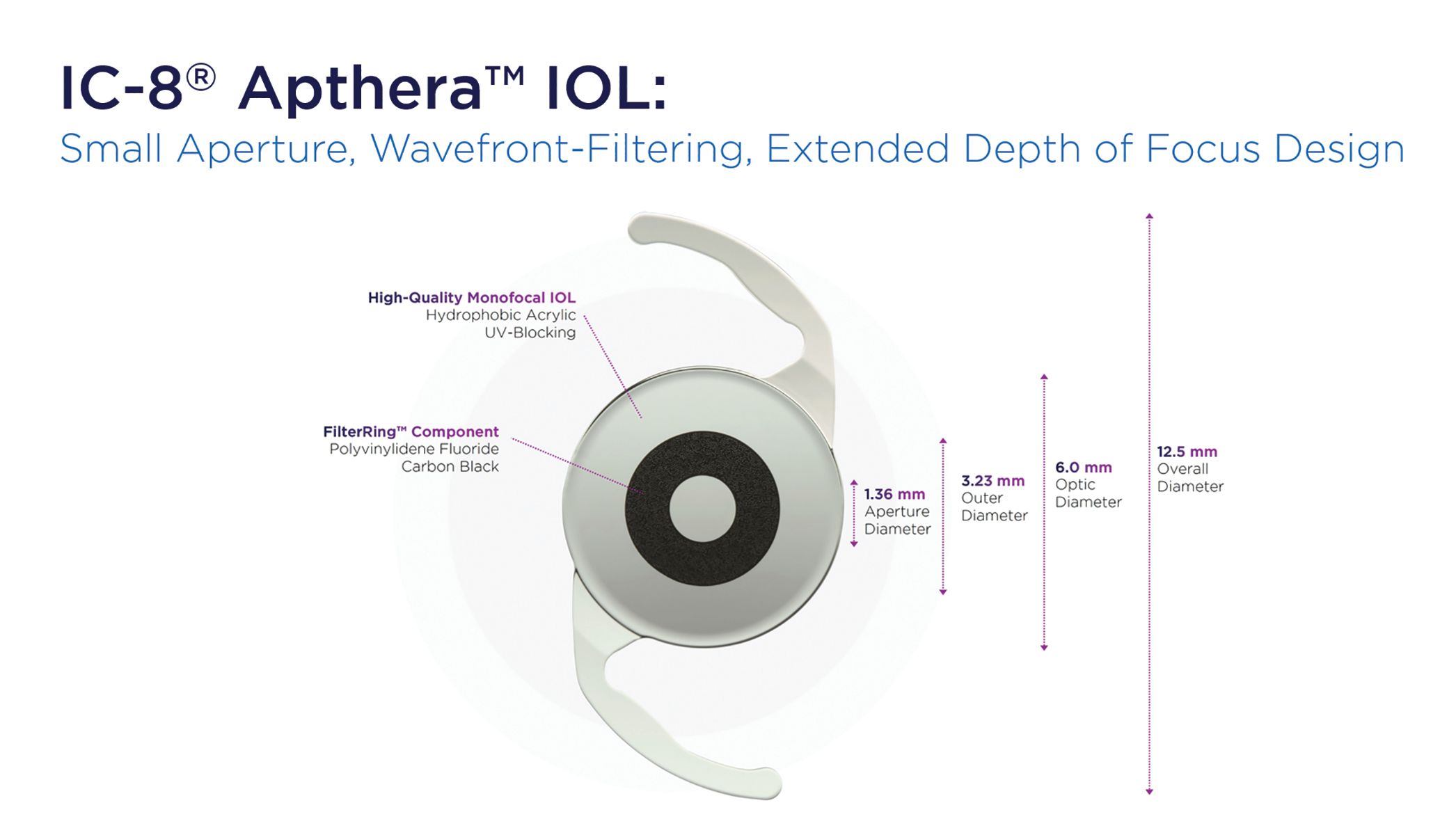 In the US clinical trial, patients treated with the Apthera IOL (n=343) achieved nearly 3.00 D of best-corrected continuous range of vision (Figure 3). Additionally, the implant demonstrated reliable visual acuity results in eyes with as much as 1.50 D of corneal astigmatism without reliance on a toric correction.

This new lens is an ideal option for cataract patients looking to reduce dependence on reading glasses, patients who have been successful with contact lens or keratorefractive monovision, and those who may be hesitant to opt for a multifocal lens because of concerns about loss of contrast sensitivity or dysphotopsia.

Other candidates are patients who have low levels of astigmatism but want enhanced spectacle independence, as well as those who may be dissatisfied with their range of vision after receiving a monofocal implant in their first eye. All these types of patients with cataracts may be precluded from consideration for many of today’s other presbyopia-correcting technologies. 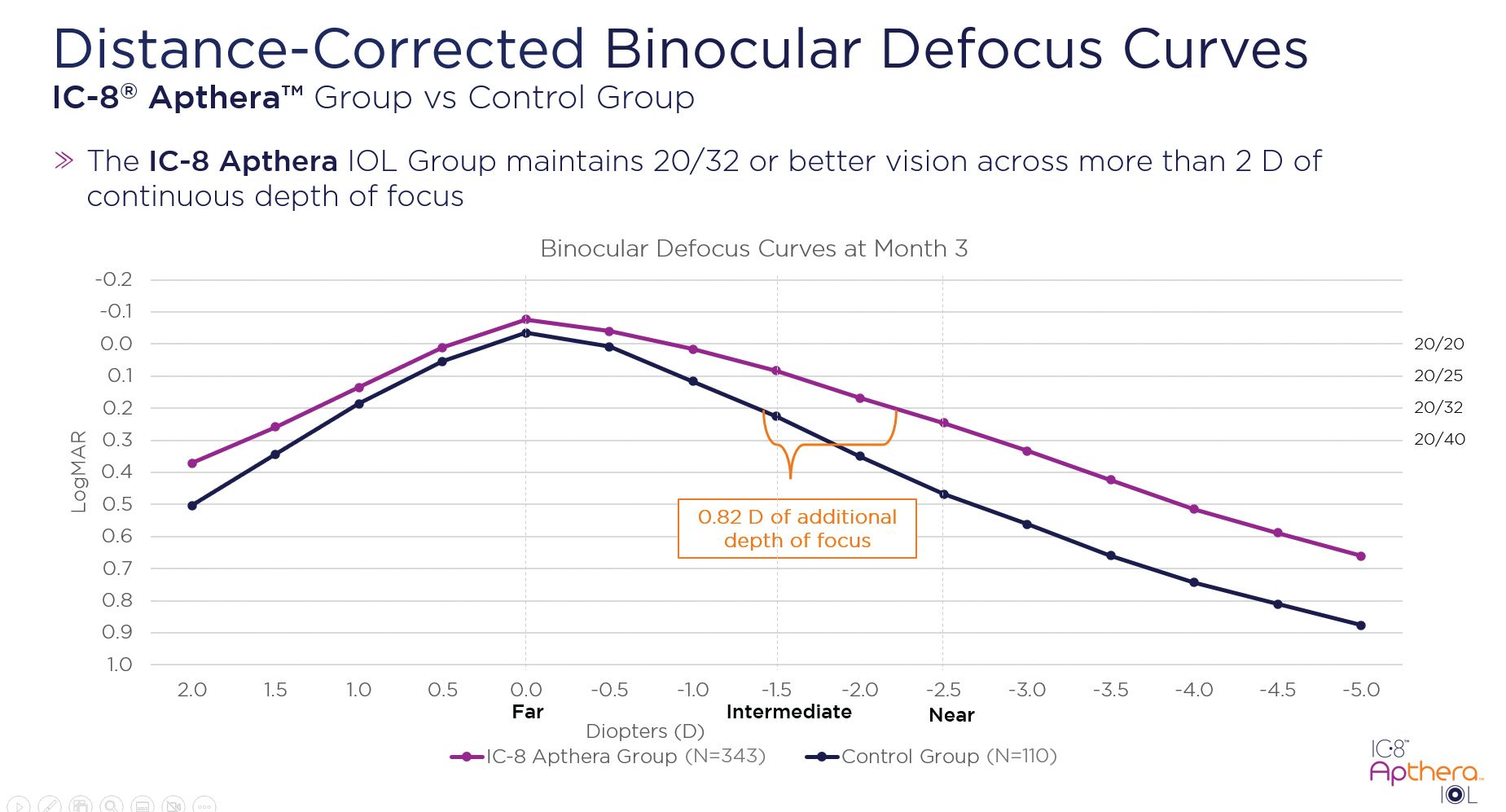 Optometrists will notice that patients who have a smaller aperture, such as older adults with naturally decreased pupil size, are less sensitive to refraction choices with small dioptric changes.

The depth of focus extends and flattens the depth of field curve so that they may have visual acuity of 20/20 or 20/25 over multiple 0.25-D steps. Someone with a large pupil or large aperture will immediately notice a 0.25-D difference.

Patients implanted with the Apthera IOL maintain normal stereopsis at a level better than can be achieved with monovision IOLs. Additionally, monovision with monofocal implants does not provide the same range of vision as phakic monovision because the natural lens still has some residual accommodation. 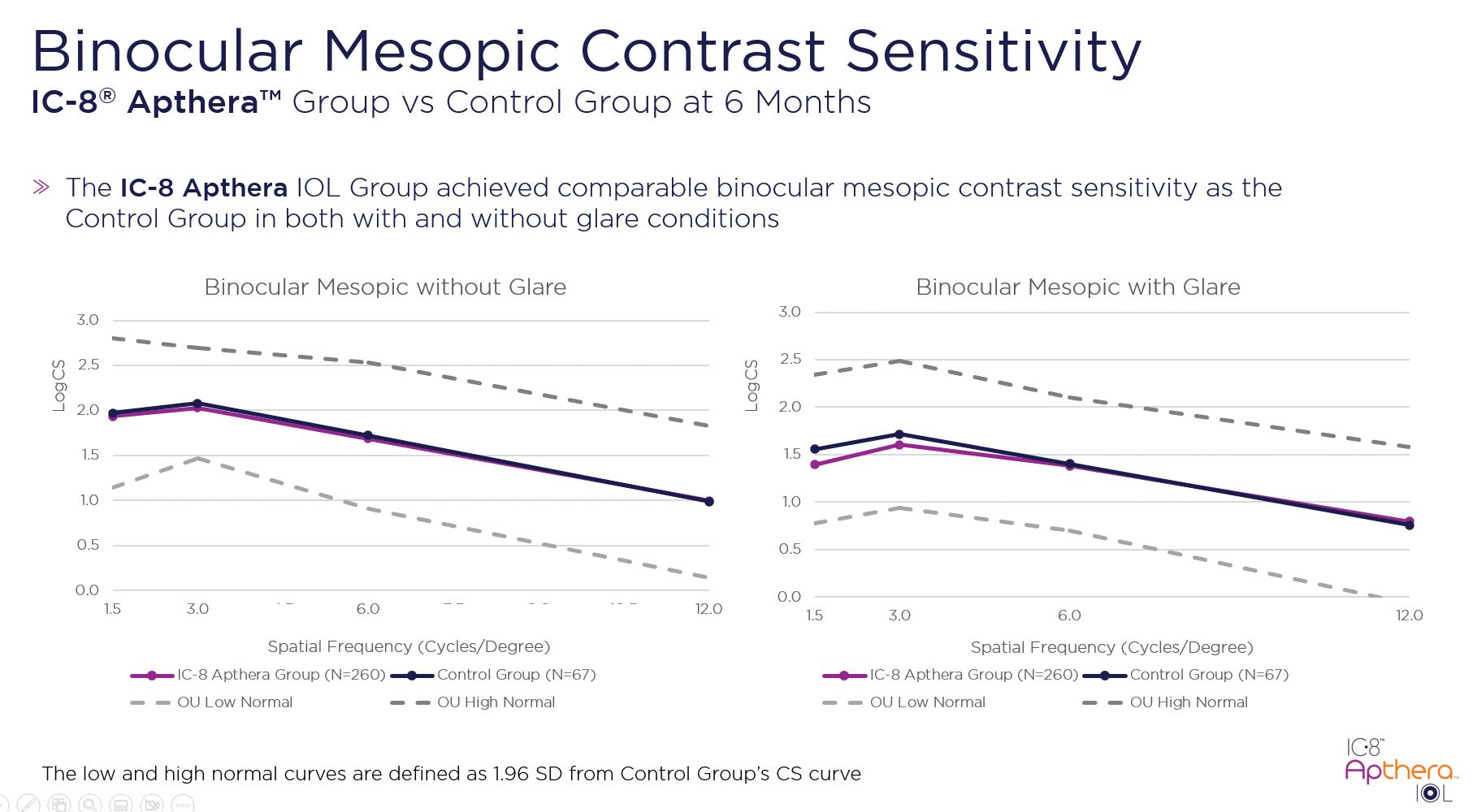 Figure 4. Binocular mesopic contrast sensitivity in both with and without glare conditions for Apthera IOL patients vs control group patients with bilateral monofocal IOLs. (Images courtesy of AcuFocus)

Patients who have had prior refractive surgery or keratoconus may have aberrations in their cornea that create visual disturbances such as halos at night and other distortions. This is an important consideration when selecting an IOL at the time of cataract surgery.

In the aberrated cornea, light rays that go through the natural pupil are not necessarily landing on the retina together, in focus. When a small aperture is added, it diminishes or decreases the impact of peripheral aberrations, blocking stray light from disrupting the central organized light as it lands on the retina. This decrease in the impact of peripheral aberrations is a unique characteristic of the small aperture and may serve as a meaningful solution for patients with aberrated corneas.

For some, there may be hesitation with small aperture technology. Optometrists might think, when they look through the little pinhole in their trial lens set that things look clear but everything is a bit dimmer or darker. But the small aperture in the Apthera IOL is equivalent to a 1.6-mm pupil that is bigger than your pinhole occluder.

The aperture of the IOL is also located inside the eye, whereas the occluder is used in front of the eye. Suppose a patient has an injury that causes them to have a small pupil and a large pupil. They adapt. Perhaps at first a smaller aperture makes vision seem dim, but over the course of days or weeks, adaptation occurs and this effect wanes.

With the Apthera IOL, the fellow eye is implanted with a monofocal, so that initially patients may notice a difference in vision between the 2 eyes. This, however, improves over time and studies show that the functional impact is negligible and preserves contrast performance.1,5

Some may ask whether a small aperture affects the field of view or the peripheral vision. In the US clinical trial and global studies, visual field testing showed no scotoma and only a slight dampening of the pattern standard deviation with results comparable to the monofocal control. Due to the optics of the Apthera IOL and its location in the eye, there was no reported impact on peripheral vision.

As with any cataract procedure, optimizing the ocular surface is important to enable accurate and repeatable measurements. This is true for monofocal or multifocal implants.

For the small aperture technology, we want to ensure the central cornea is normal with no scarring and has a very good tear film. Although visualization and treatment of the retina with the Apthera IOL in place are possible and have been successfully performed with only minor technique changes, patients with retinal disease are not candidates.7 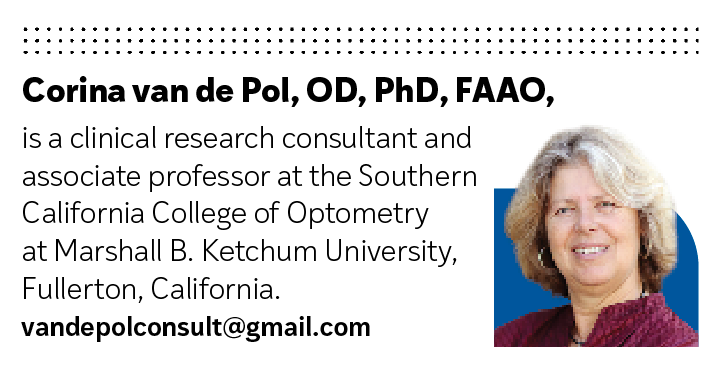 As primary care vision providers, optometrists play a key role in identifying lens changes and treating cataract patients before and after surgery. It is therefore paramount that we are knowledgeable about this newly approved IOL design that is the first in the United States to leverage small aperture optics as its mechanism of action.

Editor's note: On January 18, 2023, Bausch + Lomb announced an affiliate has acquired AcuFocus. This acquisition had not been announced at the time of writing. 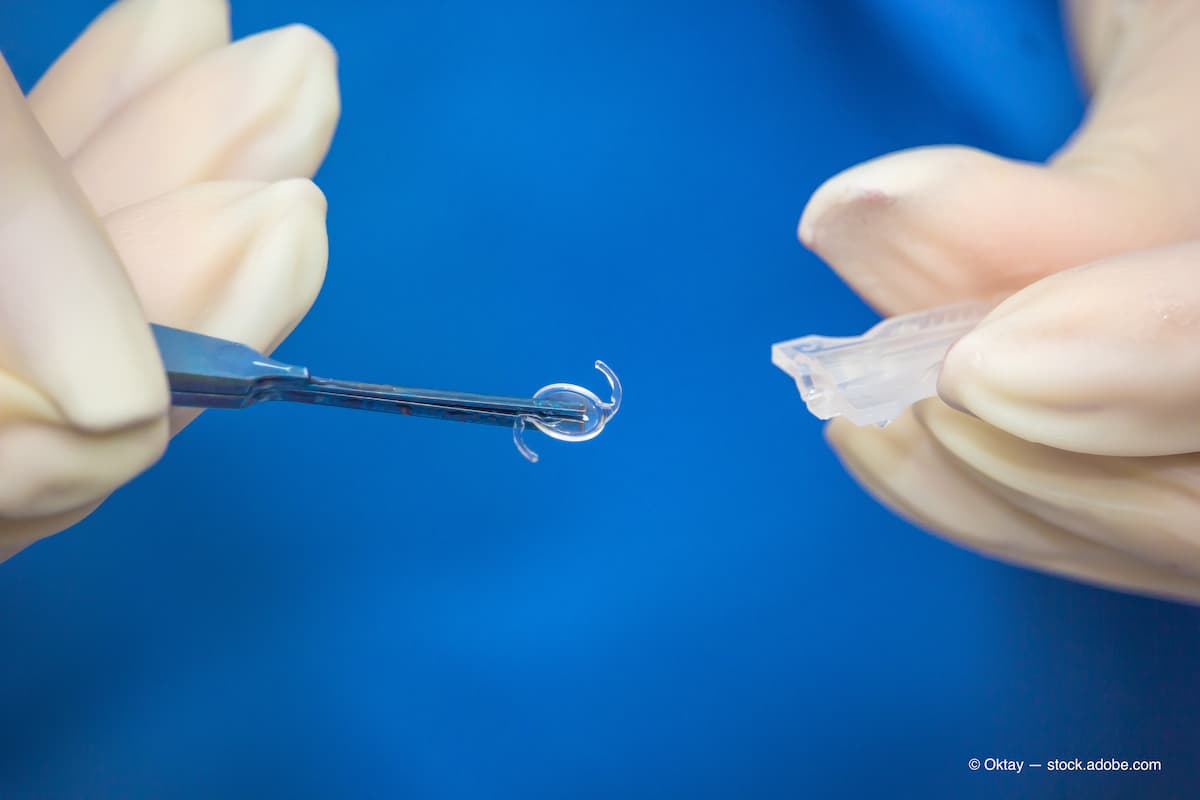 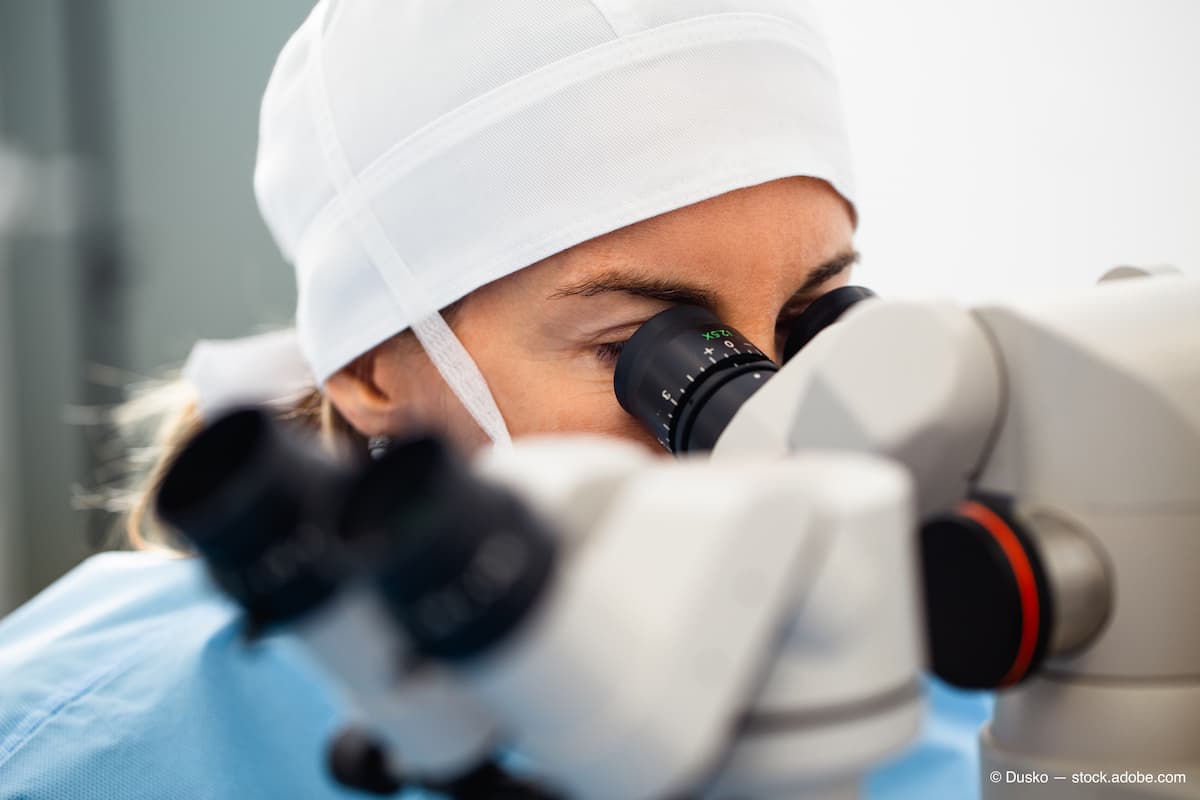