These results emphasize the importance of evaluating the midperipheral and peripheral retina in diabetes in addition to the posterior pole and performing ultra-widefield fluorescein angiography for not only accurate diabetic retinopathy staging, but also for likelihood of significant progression based on disease severity and predominantly peripheral lesions.

The initial study, conducted by investigators at the Joslin Diabetes Center in Boston, Massachusetts, found that PPL were highly and significantly associated with 2-step worsening (3.2× risk) and proliferative DR (PDR; 4.7× risk) over 4 years.2 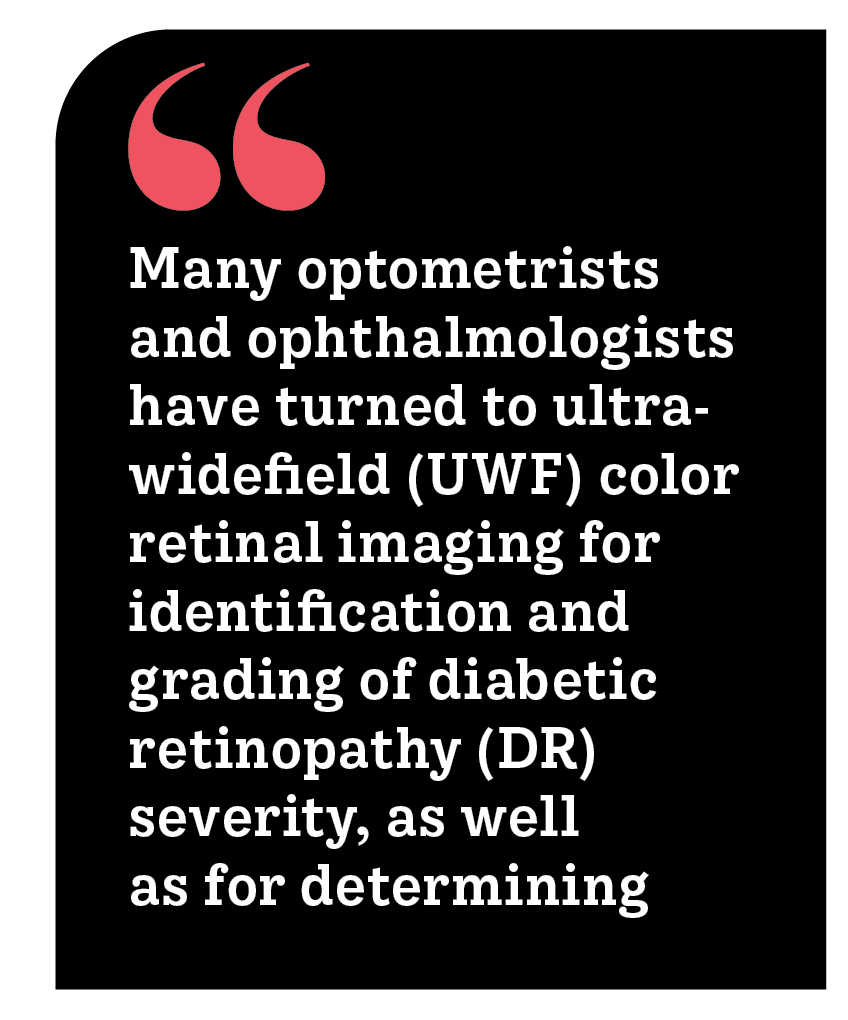 PPL demonstrated on ultra-widefield fundus fluorescein angiography (UWF-FA) were significantly associated with increased risk of both outcomes in Protocol AA, independent of baseline DRSS, although less so than reported by Silva et al in their 2015 paper (HR for 2-step worsening with UWF-FA PPL, 1.72; P < .001). The Protocol AA authors conclude that FA-PPL but not color-image PPL have predictive value for NPDR progression and should be included in future DR studies (with the caveat of increased time, cost, and adverse events with inclusion of FA).

Protocol AA is a multicenter study of more patients and eyes from a more diverse study population than was the case in the Joslin Study (566 vs 103 study eyes; more women and members of ethnic minority populations). DRSS grading was also more precise in Protocol AA with a distinction between Level 43 (moderate NPDR) and Level 47 (moderately severe NPDR), whereas the single-center Joslin study lumped these 2 stages together as “moderate NPDR.”

The authors note that follow-up was somewhat attenuated due to the COVID-19 pandemic, and that identification of color PPL may have been hindered by insufficient visualization of the superior and inferior retina with use of only one of the available UWF imaging systems (SLO produced images with the P200Tx; Optos California).

Figure. Here is an example of a patient with predominantly peripheral lesions using ultra-widefield color retinal imaging. Although DRCR.net Protocol AA found that this does not predict significant progression over 4 years, the abundance of peripheral lesions seen here compared to those seen in the posterior pole supports a diagnosis of severe nonproliferative diabetic retinopathy, as well as closer monitoring and/or referral to a retinal specialist and consideration for anti-VEGF therapy. (Image courtesy of A. Paul Chous, OD, MA, FAAO)

Another recent study has shown that mydriasis and manual lid elevation significantly improved visible retinal area (VRA) with the Optos system4 and it remains possible that true-color imaging systems would have revealed color PPL lesions more consistent with those seen by FA PPL.5

However, UWF imaging allows observation of roughly 50% more retinal area than does standardized, 7-field photography (SSFP) as has been used in virtually all DR studies since the Early Treatment Diabetic Retinopathy Study (ETDRS), and even more compared with single-image, 45°, color retinal photography commonly used in clinical practice during the last 25 years.

We would expect UWF to reveal more lesions consistent with DR based on increased VRA. Both the Joslin Study and Protocol AA found that use of color UWF imaging not only revealed more DR lesions but, more importantly, increased graded DR severity in 10% and 12.5% of eyes, respectively, compared with SSFP.

More accurate grading of DR severity is of utmost importance because it directly affects patient follow-up, prognosis, and treatment decisions. If a patient has severe NPDR rather than moderate NPDR based on significant peripheral retinal lesions identified by UWF, but not seen with examination of the posterior pole in isolation, the surveillance interval should be significantly shortened and treatment with anti-VEGF therapy becomes an important option for that patient based on correct staging of disease severity.6 This VRA benefit obviously applies to detection of any peripheral retinal pathology, as any user of UWF imaging will attest—a fact that must be remembered even if color PPL is not useful for predicting progression of NPDR in and of itself.

In sum, these new findings from DRCR.net underscore the importance of evaluating the midperipheral and peripheral retina in diabetes in addition to the posterior pole, as well as additional benefit of performing UWF-FA for not only accurate DR staging but also likelihood of significant progression based on disease severity and PPL. Figure depicts a patient found to have PPL with UWF color imaging.