A new software program that automatically aligns digital retinal or optic nerve photographs taken several years apart and alternates them to allow clinicians to look for changes over time may improve the speed and accuracy of glaucoma diagnosis.

The technology, which received FDA 510(k) clearance in July, enables physicians to "go back in time" to see whether the conditions of patients who have been followed for many years are getting worse.

"This technology underscores the importance of baseline photography, and it allows us to go back in time to monitor patients' glaucoma more accurately," Dr. Cymbor said.

The technology also is very efficient, because it only takes about 10 seconds to register an image and produce a flicker, he said.

"The ability to do that in a busy clinical practice that quickly is welcome," he added.

Dr. Cymbor is the author of one of the first studies of the technology, published in the August issue of the journal Optometry. The study found that concordance regarding glaucomatous structural change was better among graders using the software program versus graders using side-by-side comparison.

"This technology is new and hasn't been well studied yet," he said, adding that the technology evolved from a series of patents that EyeIC acquired and augmented to develop its product. "I believe that additional research will show that flicker comparison will be a useful tool for the management of glaucoma."

"You take two photographs and turn them into a movie that flickers back and forth. What that does is turn change into motion," said Ira Wallace, MD, chief executive officer of EyeIC. "The human visual system is very sensitive to motion, especially if nothing else in the photograph is moving, so the doctor sees the changes between the photographs and needs to make the decision about whether those changes represent disease-associated progression or some other change."

The algorithm for the technology requires that the two photographs have at least 20% of the image in common. Even if the eye has undergone considerable change over the years, due to causes such as progressive cataract or retinal disease, the images typically can still be matched. In addition, digitized photos from any source can be used with the software.

The software looks for any identifiable features in the photographs, such as the crossing of retinal or choroidal blood vessels or chorioretinal scars, and aligns the images along these features to achieve the best statistical match between the photographs. The physician then can determine the rate at which the two photographs are alternated to perceive the change over time.

The technology also includes documentation tools. According to Dr. Wallace, a mark made on a suspicious feature in any one of the aligned images automatically shows up in the corresponding area of every photograph so that the change can be seen immediately. The mark can then be annotated and printed or saved to an electronic medical record. The images can also be shared with other clinicians. 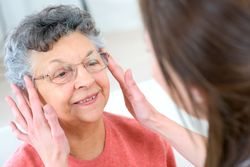