Study: Measurement of lens autofluorescence can identify patients with diabetes

A study presented by Freedom Meditech President and COO Keith Ignotz at SECO found that measurements of lens autoflurescence can distinguish patients with diabetes from those without.

Atlanta, GA-A study presented by Freedom Meditech President and COO Keith Ignotz at SECO found that measurements of lens autoflurescence can distinguish patients with diabetes from those without.

Lens autofluorescence is increased in patients with diabetes mellitus, but clinical application has been limited by the lack of an instrument suitable for routine clinical use. The study investigated possible uses of a new scanning confocal biomicroscope to identify subjects with undiagnosed type 2 diabetes and as a marker for the progression of diabetes. The study recruited 178 patients that self-reported as normal, and 53 patients that were physician-diagnosed as diabetic or pre-diabetic.

Measurements were calculated with a Freedom Meditech ClearPath DS-120 Lens Fluorescence Biomicroscope calibrated with standards traceable to National Institute of Standards and Technology (NIST). Fluorescence intensities were corrected for age by subtracting the value expected from a regression of intensity versus age for normal subjects. This “fluorescence deviation” showed progressively higher values for normal, pre-diabetics, type 2 diabetics, and type 1 diabetics and a high degree of predictability of diabetes diagnosis.

A receiver operating characteristics curve was used to determine sensitivity and specificity for prediction of diabetes type 2. At a fluorescence deviation of 2500, a sensitivity of 67% at 94% specificity was observed detection of type 2 diabetes. The progressively higher fluorescence deviations are consistent with the physiological mechanisms of accumulation of fluorescent advanced glycation end products as the subject ages. 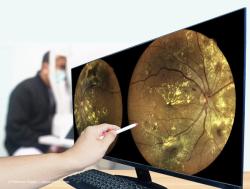 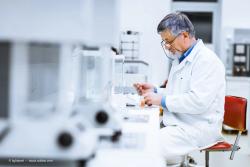