We often hear from ODs about their problems managing their staff, but once you read these staff horror stories, we bet your staffing headaches will look tame in comparison.

We often hear from ODs about their problems managing their staff, but once you read these staff horror stories, we bet your staffing headaches will look tame in comparison.

We asked eyecare providers on ODs on Facebook and ODwire to share their worst staff horror stories, and boy, did they deliver. Booze, drugs, arrests, and extramarital affairs just scratches the surface of what these practices have experienced.

I had a single female optometrist working for me years ago, and my staff members would schedule single male patients with her with intentions of setting her up on dates-including at least one that went on a date with her. After I found out that this “dating service,” the doctor and staff members were relieved of their employment at our office.

I caught an employee stealing and forging blank checks. We fired her and called the police. It turns out she had an extra key, came in after hours, and tried to burn the office down to get rid of the evidence. She was caught with the fire tools and went away for three years.

A long time ago when I owned my own practice with a partner, we discovered that a tech was using our patient files to fill her drug habit. She'd look up their PC doctors and call in prescription painkillers in to the pharmacy in the patient's name and go pick it up as them. This was before the DEA got so strict about narcotics prescriptions, obviously. She also showed up for work stoned and would sleep when the docs weren't looking. The other employees told us after we fired her for trying to falsify her time clock records. We didn't want to fire someone for being a drug addict and risk being sued for discriminating against her disability.

She's the only employee I've ever been afraid of. I worried after we fired her that she might show up and try to hurt one of us. Fortunately, she got arrested for something a few months later. I haven't heard anything about her in years. I figure she either cleaned up her act or died.

I had a staffer who was already on thin ice for absenteeism and dress code violations (big partier, increasingly provacative dresser) give notice and quit. She filed for unemployment, we filled out the form that she had quit voluntarily. A couple of months later, a Federal Department of Labor agent shows up with paperwork giving him the right to audit five years worth of payroll records. We ended up having to pay her and all other staff big bucks in supposedly unpaid lunches. And adding those lunches added a bunch of overtime we had to pay, too. We thought that was bad enough until we found out later she had pulled the exact same trick with a previous employer, who had close to 1,000 employees!

In one of my offices, I had two techs who got into a knock-down, drag-out brawl in the office-biting, kicking, scratching, and hair pulling. They knocked over and shattered a display case. There were hair extensions everywhere.

I worked with an OD who would make inappropriate comments and hit on everyone. She made everyone uncomfortable-patients, staff, local businesses. She just had a creepy way about her. Then she has one of her employees live at her house. They had an odd relationship.

Years ago when I started to grow, I had one optician and had to hire another optician. The first must have thought she was the queen bee and would have been the only one. During the second optician’s interview, she burst in the room unannounced with some dumb piece of information. At first I thought, “Well, that was strange.”

Then, I hired the second optician. The day she was supposed to start, the first optician does not show up. Hours later, I get a fax from a doctor that says she is not working because she is having breathing problems due to construction dust. I just expanded my office and kept in business the whole time-everything was kept squeaky clean. Air was perfect-I even had it tested.

Then later, she tried to sue my worker’s comp policy for her breathing problems.

Ended up she was just very upset that I hired another optician who might be better than her.

When I was on maternity leave, instead of scheduling with my partner, a technician told a patient to come back on a day when “somebody who knew what they were doing” was there, and my partner was standing right next to her.

We had an office worker who was the “other woman.” The tough-as-nails wife came in looking for her on her day off, then would stalk the parking lot. The wife wanted to hurt the girlfriend (my staff member), but the staff was off that day. The wife hung around parking lot assuming that was a lie. The staff member called in sick next few days.

I hired a young lady who had moved to New Jersey from Texas. She kept mentioning how she had to go the bank to get a loan.

One morning a young male banker comes in for an exam. I casually mentioned to her that he is a banker.

She disappears for a very long “lunch,” and when she returns, we find out she “serviced” the banker in the parking lot.

We dismissed her later that afternoon-I don't know if she ever got her loan.

We had an optician who was always sharing too much personal information with patients. One day, she got a new zebra tattoo right above her left butt cheek. She was so excited that she showed a patient.

She doesn't work with us any longer.

I have a great one! I worked for a doctor in Dallas, and the doctor hired a new optician. He was great- very proficient, kind, soft spoken, and hard working. I often trust too easily, but thought I was right on the mark with this one.

About four months in, the police show up and arrest him for theft. Long story short, we found out he had a warrant out for his arrest for stealing tons of money from another OD in town. He showed up to work two days later and gave us this long sob story about how he was framed and that he took the fall for another employee but was too nice to stand up for himself-a real tear jerker, for sure! Our office manager decided to let him stay.

A couple more months passed, and then things started going missing from the office. One person’s paycheck (that she had just cashed), frames, and then the craziest thing of all: He stole a camera from one of the employees, then staged a whole crime scene to make us believe it was actually stolen. I believed him (I told you-I trust too easily, ha!) until the camera was found at a pawn shop and the pictures on it were of the optician’s car! He took pictures of his car and then pawned the camera. Needless to say, now there are two warrants out for his arrest for theft, and he is MIA in the state of Texas.

The owner of the private practice where I worked hired a 21-year-old. She worked Tuesday-Friday the first week. Called in sick Monday the second week. Called in sick on Monday again at the start of the third week, after which we canned her over the phone. She then filed for unemployment-fortunately, they laughed at her.

Long, long ago, a clearly strange scheduler was saying strange things on the phone and to everyone else. At the lunch hour, she sat in her car and took off all her clothes. (That's a song, I think? “It's getting hot in here...”) Alcohol, we think.

Try this one-I went against my cardinal rule and hired an office manager. Two years later, the title went to her head, and she decided that she could arrive late on the days I was at my second office and leave early on the same days. Not to mention, when I finally found out what was going on, she had sat on approximately $250,000 worth of unfilled claims.

To top that, I had in the meantime hired her daughter who was working in my lab. Well, let's just say the apple doesn't fall far from the tree. Same thing: arrive when she wanted, missed days at her discretion. Finally, I found out and fired her.

I worked in an office with a staff member who would drink a bottle of wine on her way to work, hit a few drugs in the middle of the day, and party all night. When she was really messed up, she would hide in the lab downstairs and edge lenses, thus screwing up untold blanks. The boss fired her one day, but she was so stoned that she had no memory of it. She showed up for work the next day, and he was so flabbergasted that he just let her continue working.

I remember a phone call from one of our techs prior to her work shift many years ago:

Tiffany: Uh, hi Dr. G, I'm not going to be able to come in for my shift today-maybe not tomorrow either.

Tiffany: Payday isn't til Friday, so I can’t post bail.

Me: WHY DID YOU GET ARRESTED?

Tiffany: Oh, guess the cop parked next to me at 7-Eleven saw me drinking the beer that I just bought when I got in my car.

Let’s just say that since an incident in 2002, it's been a no-no for a doctor and female staff member to be alone in Room 7 with the door closed. I was blissfully unaware, actually. I’d just started in February, and the stuff hit the fan in April. But there were little things I found out about later-like the Room 7 thing (which is the corner room at the end of the hall). And this was the doctor's assistant/scribe, but she was being promoted to work with the senior doc and was supposed to be training the replacement. That did not go well. It all came to a head when senior doc came around the corner, and they were making out in the hall. In a patient area. That pretty much did it.

That does explain why they were so eager to add Saturday morning hours, though.

Click here to check out our top 10 patient horror stories 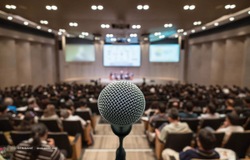 Announcing IDOC keynote speakers for ‘The Connection 2022’ in February