My grandfather used to call it “dealing with the public.” I can think of no better term. With that said, several weeks ago, there was an unfortunate encounter in our optical.

An older patient who has been coming to see us since the 1950s was angry—very angry. She had ordered a new frame for her lenses a week prior and was going to pay for it when it arrived.

This had been her modus operandi with us since the days of my grandfather extending lines of credit and taking payments of a dollar or two a week way back when. She was confused and did not remember that she had already ordered the frame and was now in the optical to do so.

Thankfully, I was within earshot and heard the entire conversation, as she did not remember that the frame was an out-of-pocket expense and became quite angry. The optician she was speaking with was calm and professional, and I later told her how well I thought she had conducted herself.

When the patient wasn’t hearing what she wanted to hear, the optician came and got me from the room around the corner. I invited the patient to come into my father’s exam room and talk with me. I told her I understood she was upset, and she cut me off, pointed her finger very close to my face, and said, “Don’t sit here and tell me you understand when you don’t.”

I then politely asked her to explain it to me. The conversation then turned a bit more abstract. She explained to me (and to the rest of the building, I presume) that she would never have been treated this way when my grandfather owned the practice.

She said she only wanted to speak to my grandfather and no one else. I politely explained that he had passed away in his mid-90s well over a decade ago. I thought for a second about the best way I could defuse a situation involving a very angry and very confused patient. So I smiled and said, “My granddad was quite a character, wasn’t he?” He was known to be quite a character, and many of our older patients have funny stories about him.

To my delight, she sat on her walker and told me stories about my grandfather for probably 2 or 3 minutes. She really got a kick out of it when I told her that, as children, when we did something wrong and said we were sorry, he would look at us and say, “I already knew you were sorry.”

She laughed and said, “That sounds just like him.” We laughed together, and I told her I would personally see to it that her glasses were taken care of. She left, presumably, feeling better about things.

The next time something like this happens, I’ll try to remember what worked: keep calm and invoke positive vibes. With my grandfather as part of the conversation, that’s easy to do. 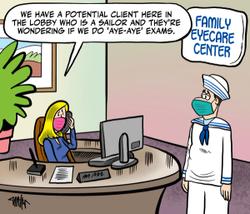 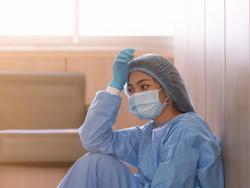