Continuing the conversation on mesozeaxanthin

I want to thank the Macular Pigment Research Group (MPRG), Waterford, Ireland for responding to my assertion that mesozeaxanthin (MZ) in supplement form, even if it was scientifically possible to study alone as a supplement, has not proven as of yet to be necessary to build central foveal macular pigment, improve cone visual function, or uniquely protect the retina from age-related macular degeneration (AMD).

I want to thank the Macular Pigment Research Group (MPRG), Waterford, Ireland for responding to my assertion that mesozeaxanthin (MZ) in supplement form, even if it was scientifically possible to study alone as a supplement, has not provenas of yet to be necessary to build central foveal macular pigment, improve cone visual function, or uniquely protect the retina from age-related macular degeneration (AMD). Some 85,000 people in Ireland have AMD,1 so I respect MPRGs’ scientific and public health efforts toward reducing the human burden of this disease.

Much of the controversy concerning the necessity of supplemental MZ by opposing sides recently appeared in Eye.2

While it is true that MZ has been found in improperly manufactured eye supplements, the lutein (L) provided during the primate experiments of EJ Johnson et al was carefully prepared so as not to contain any isomers of zeaxanthin (Z). The L was also experimentally confirmed to have no Z isomers by both chiral column chromatography and absorption spectra.2

I agree that MZ could appear in blood, resulting from ingestion of eggs of Mexican origin from chickens fed MZ feed. As to whether there is MZ present in adulterated lutein supplements, that is a matter of quality control during manufacturing, as well as proper labeling. Agreed.

DSM’s scientific analysis has shown MZ (found in nature) to be present at the concentration of approximately 0.02 parts per million in salmon skins only, not a significant amount from a rarely consumed food.3 At this concentration, one would need to consume 228 pounds of salmon skin to achieve a 2-mg MZ dose. Because such a low concentration of MZ is found in nature, manufacturers cannot harvest the desired amount from dietary food sources. It is necessary for eye supplements that contain MZ to resort to using a wholly synthetic process, absent a readily available dietary foodstuff such as marigold flowers (L) and paprika (Z), which I agree are extracted using a chemical process.

However, the main question is: What is the source of retinal MZ? As five other scientists have pointed out,2 one would expect to see MZ and higher macular pigment in MZ-supplemented individuals. “However, the conclusion that dietary L is the usual source of retinal MZ is confirmed by the finding of Johnson et al that MZ appeared only in the macula of carotenoid–free monkeys fed pure L (as determined by two independent laboratories) and not in carotenoid–free monkeys fed pure Z.”2,4 Further, the lutein supplement Ultra Lutein, containing a small amount of MZ, was not employed in those careful primate experiments. Combined with MZ’s comparatively poor bioavailability (vis-à-vis L or Z), adulterated lutein supplements could not possibly account for the highly concentrated MZ content found in autopsies of retinas from those lutein fed primates.2

There are additional deuterated labeling experiments conducted in quail which suggest that MZ is derived from dietary lutein. Following euthanization, deuterated L and deuterated MZ were identified only in birds supplemented with deuterated L (and not deuterated Z isomers-MZ or Z). The limited availability in nature, primate, quail, and labeling data together imply that MZ-containing ocular supplements are not necessary for achieving central retinal MZ, a nonetheless important foveal retinal carotenoid.

Finally, our laboratory has published preliminary human data that is fully consistent with the primate, quail, and labeling data, showing increasing foveal one degree pigmentation and resolution of central scotomas with nine mg FloraGlo L intake, alone, as shown below in four representative subjects from our medical center:

Nolan and Beatty further assert that there are “no peer reviewed publications on the impact (if any) of supplementation with a formulation that contains Z alone in terms of MP or visual performance.” Au contraire. Our laboratory has gone beyond the 2 mg dietary Z used in the AREDS2 paradigm by evaluating 8 mg dietary Z in (n=25) subjects. The data show enhanced visual acuity, foveal shape discrimination, and resolving foveal scotomas in patients with early AMD. This data was initially presented at the Association for Research in Vision and Ophthalmology meeting and then published in November 2011 in an FDA-approved, Index Medicus-cited publication known as the Journal of the American Optometric Association.5 Here is what we found: Zeaxanthin alone is capable of building central foveal pigment (top MP autofluorecence) and resolving central scotomas as shown below, from baseline (left) through four-, eight-, and 12-month time periods from five subjects enrolled in this randomized double-masked clinical trial.

Drs. Nolan and Beatty suggest that eye supplements should contain all three retinal tissue macular pigments, and not just the two ubiquitous dietary pigments, in order to robustly build central foveal pigment. The authors appear to cherry pick their citations to meet their claims. Their responses ignore the emerging science that dietary L alone or dietary Z alone can build central foveal macular pigment, improve central visual function including better visual acuity, resolution of early central AMD scotomas, and enhanced shape discrimination. This is a matter of public record and our clinical experience.ODT 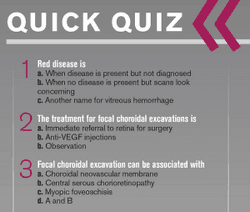 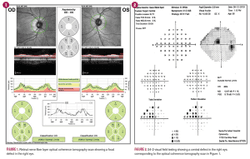 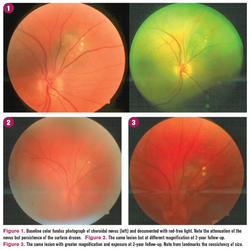 How to differentiate between choroidal nevus and choroidal melanoma