Dry eye could be aided by tear osmolarity device

A new device (TearLab Osmolarity System, TearLab Corp.) that measures the osmolarity of tears to aid in the diagnosis of dry eye disease has been given FDA 501(k) clearance and also has received a silver 2009 Medical Design Excellence Award (MDEA). 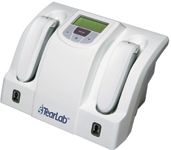 The system-about the size of a telephone-absorbs a tiny, 50-nl tear sample via capillary action and measures the osmolarity of the tears. High osmolarity correlates with severe dry eye.

A statement from TearLab Corp. said that the system, which was cleared by the FDA May 14 and will have a "soft launch" until the company receives its Clinical Laboratory Improvement Amendment Waiver, represents the first biometric test available for eye care.

In less than 30 seconds, the system can quantitatively assess hyperosmolarity of the tear fluid, which can lead to dry eye, as opposed to time-consuming and subjective testing methods.

"It could replace the Schirmer test, which notoriously has variability and is not a precise test," said Gary N. Foulks, MD, professor of ophthalmology, University of Louisville, KY, and a member of TearLab's scientific advisory board.

According to the company, the system would contribute to earlier diagnosis, allowing early therapeutic intervention. Like a cholesterol test, the system will assign a reference number to a patient's osmolarity level. That number can dictate if the patient should be monitored further or be subject to treatment.

The system's "lab-on-a-chip" technology allows a disposable microchip to interface with the system and provide results within seconds. Eye-care providers then can determine appropriate management to maximize patient visits and improve workflow.

Backed by 7 years of testing and $20 million in capital, the system is commercially available in 11 countries, including Spain, France, Germany, Italy, and the Netherlands, according to the company. TearLab Corp. is running an Alcon-sponsored core validation study of 500 to 600 patients to determine how osmolarity rates correlate with disease severity.

Dr. Foulks, whose lab evaluated 90 patients in earlier clinical testing of the device and who has enrolled 15 patients so far in the core validation study, said the device is very easy to use and is easily adapted into a clinical routine. "It's rapid, the patient doesn't have any discomfort, and it's a very quick result within a matter of seconds," he said.

Dr. Foulks said he believes the technology could be used to measure additional markers in the tear film, including proteins and immunoglobulins.

The system received a silver MDEA award at a ceremony held during the Medical Design & Manufacturing East 2009 Conference and Exposition at the Jacob K. Javits Convention Center on June 12 in New York City.